Share All sharing options for: The Jumbo Package │05.05.14

"Our players do work out with our strength and conditioning coaches to this point," Saban said during his latest Crimson Caravan stop Thursday. "I think for young players to have the opportunity to visit with their coach for a couple hours and be able to learn is probably a real advantage for the development of young players." Technically before the rule change, the summer workouts were voluntary and players who didn’t want to attend couldn’t be punished according to NCAA rules, but it’s unclear how "voluntary" the workouts actually were. Coaching staffs weren’t allowed to have contact with the players regarding football during the summer months. The strength and conditioning staff monitored the summer workouts. Saban said the coaches have always been able to meet with the players regarding "administrative-type stuff" which includes things that aren’t related to football.

Nick Saban: 'We did everything we could do last year' to avoid loss of focus | AL.com

"We did everything we could do last year," said Saban, who was in Mobile for a Crimson Caravan event. "I think some of it is a result of, you're a victim of your own success to some degree. We had a team full of guys that had never had a significant loss. We had lost a game and won a championship, lost a game the next year and won a championship. So now we're 11-0 and we have a team full of guys who have never had a significant loss. "The older players have to prove the leadership for the younger players and everybody's got to buy into the same principles and values, but some team chemistries are just difficult to -- I hate to use the word 'manufacture' -- but get to come together like you want, because everybody's got to buy in. I think this year's group has been much better that way, the leadership's better. I'm not in any way criticizing the team. It was a little bit of a work in progress all year long trying to get everybody to buy in to do the things we felt like we needed to do to be the best team we could be."

Alabama's kicking competition could be more than just a 2-man battle | AL.com

Along with freshman signee JK Scott, Alabama will have preferred walk-on Gunnar Raborn to add to the mix. Raborn, who hails from the same place (Lafayette, La.) as departing punter Cody Mandell, made his decision official shortly before A-Day. "(Alabama coaches) called me and I went there to visit," Raborn told The Advertiser last month. "They told me that I would have a chance to punt and kick for them." Raborn, at 5-foot-10 and 180 pounds, handled both the punting and kicking duties for St. Thomas More High. He went 7-for-9 on field goals, 30-for-31 on extra points and averaged 31.8 yards per punt, according to The Advertiser. It wouldn't be unheard of for a preferred walk-on to beat out a scholarship player, especially at Alabama.  It's happened multiple times since Nick Saban arrived, as Mandell beat out Jay Williams in 2010 and held the job for four consecutive years.

The offseason trade of Darren Sproles could mean even more opportunities for the 2009 Heisman trophy winner in his contract year. "It's an exciting time in my career," Ingram told NOLA.com in March. "I just want to take advantage of my situation and the opportunity that's presenting itself. Just want to prove to the organization that I can be the back they wanted, an every-down back, type of playmaker that they need."

Alabama clinched its fourth SEC title in five years with a 3-1 win at Missouri. It was immediately followed by a dog pile on the field. Tiger coach Ehren Earleywine wasn't a fan of that. He told his side of things to the Columbia Daily Tribune.

Which SEC teams have the easiest and toughest schedules next season? SDS takes a look at the SEC's strength of schedule for 2014 based on opponents' winning percentage. 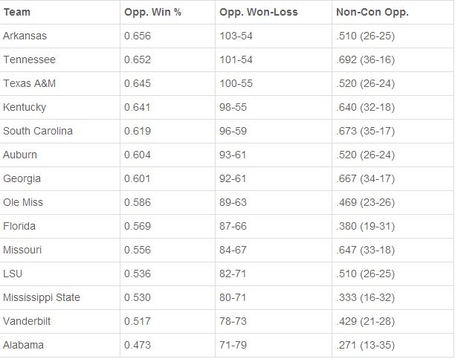 Y'all have a good Monday.