What are people around the sports world saying about 'Bama players in this year's draft? Oh, and your daily dose of Crimson Tide related links and quotes.

But McCarron also had the misfortune for his own legacy, if you want to call it that, of playing on one of the most star-studded teams in the game. And Nick Saban does not expect as much out of his quarterbacks as some other coaches.

This is a fairly accurate synopsis of AJ's career/legacy. We'll always remember his performance in the 2011 and 2012 championship games, the final drive against LSU in 2012 and of course, this.

But I also believe it's fair  to wonder aloud about his over talent and place among elite quarterbacks. If he is fortunate enough to have a successful NFL career, those criticism will be put to rest, but if his career is short lived, much like Alabama QB's over the last decade, he'll go down as the greatest game manager Alabama ever had.

And that ain't necessarily a bad thing.

“This is something I’ve been dreaming of for a long, long time,” Norwood said Monday during a tour of Fort Benning. “I’ve put in a lot of work and a lot of hours and persevered just to get here. It’s less than a week away and I’m just real blessed. I’m real excited at the same time. I don’t know the emotions I’ll have about it (when I get selected).”

Just a few months ago, it appeared unlikely Norwood would even be drafted at all. Yes, he finished his time with the Tide with decent numbers — 81 catches for 1,275 yards and 12 touchdowns — but played second fiddle to the spectacular Amari Cooper the past two seasons.

In January, things started to change. He had a strong week at the Senior Bowl and followed it up with a 40-time (4.48 seconds) at the NFL Scouting Combine few saw coming. He topped it off with a standout performance at Alabama’s pro day in March. Now, he is projected as a mid-round pick, with the possibility of creeping into the second round.

Man, I would absolutely love to see the Tiger Killer get drafted in the 2nd round. 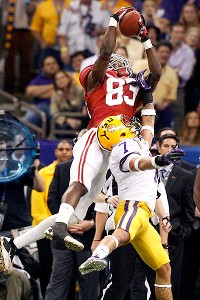 No college football team has churned out NFL talent the way Alabama has in recent years, and on Thursday night Alabama can set a new record for producing Top 10 draft picks. If an Alabama player goes in the Top 10 on Thursday, it will be the sixth consecutive year that a Crimson Tide player has gone in the Top 10.

Looks like this streak will end tonight, unless a team that desperately needs an ILB or Safety decides to jump up and grab Ha Ha or CJ.

Predictions sure to go wrong: Where and when we think Alabama's top NFL Draft hopefuls will land | AL.com

Those who watched him throughout his Crimson Tide career are probably miffed that he falls this far, and, honestly, I am, too. There's no way one of the surest things in this year's draft falls past the Packers, who need some help in the middle of their defense.

Would love to see CJ go to the Packers and play next to AJ Hawk. I know players want to go as high as possible (mo money and all) but going to a team that has a track record of success and developing talent is far more important when it comes to long term success in the NFL.

Would Ro have been a bust had he gone to a better organization? Probably not.

Former Alabama safety HaHa Clinton-Dix did his best to document the snoozing of fellow draftees while doing the media circuit Wednesday in New York. The first round is Thursday night in Radio City Music Hall.

Former Alabama DB Javier Arenas has 'that home feeling' back in Southeast with Atlanta Falcons | AL.com

I'm not as familiar with the Falcon's needs as others but I would love to see Javy make a name for himself as a punt returner in Atlanta.

Auburn’s roster is in better shape than Alabama’s at first blush, but a closer examination shows cracks. Yes, Saban’s missing a starting quarterback, but Jacob Coker is on the way. And besides, since when has Saban needed a star QB to win? Alabama’s secondary has holes, but is it worse than Auburn’s?

One five-star cornerback is already on campus and another is coming soon. Landon Collins might be the best DB at the Iron Bowl this year. Based on pure talent (three consecutive No. 1-ranked recruiting classes) and a history of sustained success (two losses was a bad season), I feel more confident about the Tide’s chances.

Last year proved once again the most talented team doesn't always win the Iron Bowl and looking at this upcoming season that will likely still be the case. Under Saban, Alabama will always have one of the most talented teams in the country but we've only gone undefeated once since he arrived. If teams can figure out how to stop AU's running game, they could lose 3-4 games in 2014, but if it continues to be this unstoppable force, we could see another showdown in late November.

Alabama softball rolling 3-deep at pitcher as it kicks off postseason in SEC tournament | AL.com

Alabama holds the top seed in the 10-team tournament. It takes on Auburn in today's 5:30 p.m. quarterfinal matchup at South Carolina. The winner faces No. 4 Florida or No. 5 Georgia in Friday's semifinals.