What the SBN site Acme Packing Company had to say about the Packers pick:

In a surprising slide, the top safety on many draft boards fell down to the 21st pick in the draft. Clinton-Dix was a two-year starter for Nick Saban's defense in Alabama, recording seven career interceptions as well as four quarterback sacks.

Clinton-Dix bolsters the safety position for the Packers beside Morgan Burnett, and will allow Micah Hyde to be used as more of utility defensive back, likely splitting time at both safety and slot cornerback.

This pick is a perfect example of Ted Thompson drafting the best player available.

The NFL Draft is upon us, and Roll Bama Roll is attempting to provide some evaluative services to the teams that will be picking up a former Bama star.

Let's kick this thing off with the fabulously named HaHa Clinton-Dix. 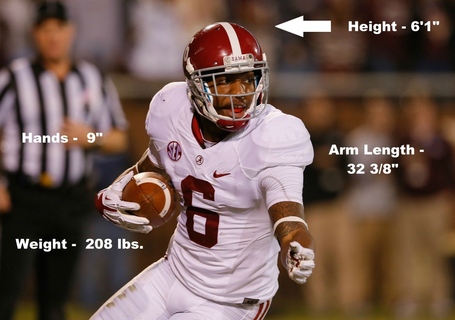 Ha Ha (actual first name: Ha'Sean) is a rangy free safety that excels as a fluid center fielder.  He diagnoses plays well, and takes good angles to the ball/ball-carrier.  He  does a fine job of breaking down and making tackles in space.

HaHa isn't overly muscular, and is not likely to be regarded as an overly-intimidating presence.  His measurables at the combine left a bit to be desired, as he was middle of the road or worse among his peers in the 40-yard dash,  bench press, vertical jump, and 3-cone drill.  Also, for all of his ability, you would probably want more interception production out of him, as he only had six career interceptions (in three years).

The Crimson Tide defense is about as close to an NFL system as you'll find in college football.  Bouncing between 3-4 and 4-3 base sets, HaHa has been asked to do it all during his time at the Captsone.  Whether manning center field solo, coming up and playing in the box to assist in run defense, or playing up near the line in quarters coverage (where he had to make run/pass reads on the fly, and immediately cover the deep middle if necessary), HaHa displayed serious flexibility, and should be able to quickly adapt wherever he lands.

It's somewhat counter-intuitive, but HaHa's most memorable moment was probably not his most impactful, though it did happen on the biggest of stages.  At the start of the second half in the 2013 BCS Championship game, with the Tide up 28-0 against the Notre Dame Fighting Irish, HaHa made an athletic play to effectively seal the game.

The Irish took the second half kickoff and promptly started marching down the field.   In the play below, HaHa starts off outside of the frame, playing deep on the right hash.  Notre Dame QB Golson tries for the home run, but underthrows the ball.  CB Dee Milliner manages to get a hand on it, and HaHa does a fine job of keeping his eyes on the ball, securing the catch, and getting his foot down.

For another example (and some more extensive film study on HaHa), I highly recommend checking out this film study piece written by our own GumpinOnSaturdays.

Carrying one of the best names in the game, the question often arises: where exactly did it come from?  From an interview a couple of years ago:

"My grandmother has been calling me that since I was a little kid, so just been a little kid thing," Clinton-Dix said.

Mock Drafts have HaHa landing as high as #8 (to the Minnesota Vikings) or as low as #24 (to the Cincinnati Bengals).  The most common guess, though, seems to be with the St. Louis Rams, at #13.