What the SBN site Baltimore Beatdown has to say about the pick:

General Manager Ozzie Newsome and Owner Steve Bisciotti were listening in to Lewis' analysis with glee. "This is a leader at the position of linebacker," Lewis said, as the Ravens brass listened. "I left there a couple years ago, but when you watch this kid play football, his instinct is what impresses me the most. He’s very patient with his feet, he stays in the pocket and when he gets there. … He’s a read-it-and-react guy."

Mosley is coming into Baltimore expected to be a starting linebacker. He should see time at both inside and outside as the Ravens like the mix up player positions and Daryl Smith is currently the starting inside linebacker. However, with Smith having turned 32 in March, it isn't expected that he fulfills his entire contract which brings the need to groom the future face of the Ravens' defense in Mosley.

I don't know if Mosley was the perfect fit for the Ravens' need at the moment. Don't get me wrong, I can't wait to see Mosley line up next to Daryl Smith, but I thought some of the talent at safety remaining on the board was too good to pass up.

Mock drafts are nothing more than conversation pieces, but I don't know if many would have had both Calvin Pryor and Ha Ha Clinton-Dix still on the board by the 17th pick. Conventional wisdom was thought to be that whichever player was still on the board, that's who the Ravens would pick.

FINALLY, the 2014 NFL Draft is here. Alabama looks to continue their streak of players being selected in the first round - a run that began in 2009 when OT Andre Smith went to the Cincinnati Bengals at #6.

C.J. Mosley is almost a lock to be among the first 32 picks. He has been an Alabama fan favorite since he first stepped onto the field as a true freshman in 2010. In his first collegiate game against San Jose State, he came off the bench to lead the team in tackles with seven and broke up three passes. In a rematch of the previous two SEC Championship Games, Alabama hosted #7 Florida in Bryant–Denny Stadium. Mosley returned an interception 35-yards for a touchdown to quell a Gators comeback. This was a moment when most observers knew he was going to be a special player. 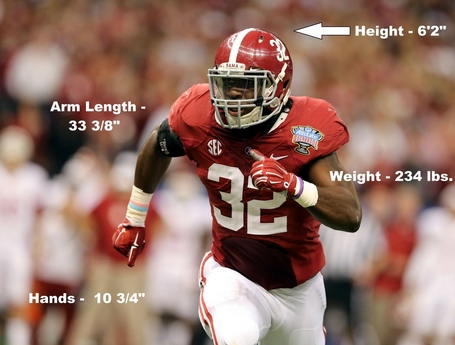 The man is a ballhawk. He has a high football IQ, excellent instincts, and always seems to be in position to make a play on the ball. The inside linebacker led the 2013 Crimson Tide in tackles with 108 (61 solo), 9 tackled for loss (-20 yards), and 10 QB hurries. Mosley finished his career with an Alabama career record for interceptions returned for touchdowns with three (see below).

He has exceptional lateral agility that allows him to flow and range from sideline to sideline. He can anticipate the run as well as cover tight ends through zones and running backs in man coverage.

He has a motor that does not quit to go with great heart and enthusiasm. Nobody ever accused C.J. of not going 100% whether it was in a game, at practice, in the weight room, or in the classroom.

Mosley could use a little more body mass. At 234 pounds, he may need to bulk up to cover the Jimmy Grahams of the NFL world.

He has had a few injuries that have plagued him throughout his college career. Some may question his durability at the next level.

The Crimson Tide defense has deep roots based in the NFL. Nick Saban's defense is one of the few in college football that bases out of a 3-4 defense. In this alignment, the nose guard duty is to line up directly over the center, defends both gaps with the intent to neutralize the center in a pile of bodies. This allows linebackers the freedom to be more creative and read plays. However, the wrinkle in Saban's D is that he will also utilize the four man/one gap fronts similar to the 4-3.

Mosley spent the better part of three years playing behind Nico Johnson at the weakside "Will" linebacker position because Nico was able to handle the vast majority of snaps regardless of the situation. C.J. excelled at pass coeverage but had to prove to be able to take on offensive linemen and stuff the run as well.

Many Tide fans expected to see him declare after his junior season but they were thrilled he came back for his senior year. His intent was to round himself out as an every down linebacker. Mission accomplished.

"To me I wasn't fully developed yet, especially me not playing on every down," Mosley told al.com. "I think I've proven out well this year that I can play every down. It's helped me out a lot."

Mosley is one of the most liked guys on the team. His tenacious demeanor on the field does not reflect they guy is off the field. He is a big movie buff and was featured in three movie trailers that aired on ESPN for the upcoming release, "300: Rise of an Empire."

Mosley could go as high as #8 to Minnesota who is looking for a total defensive overhaul. The Vikings also need a quarterback but most of this year's crop is making NFL GMs a little uneasy.

Another team that is giving C.J. a good long look is the Baltimore Ravens at #17. It would be nice to see him reunited with former Crimson Tide stars Terrence Cody and Courtney Upshaw.

Chicago (14th) and Green Bay (21st) have shown great interest as well. The Broncos have been rumored to be looking to trade up from their spot at 31 to get Mosley.