Offensive Production in the Saban Era

Share All sharing options for: Offensive Production in the Saban Era

Like the Phoenix from the ashes, the "A Cut Above" series is making a dramatic return. If you saw last year's series, you already have an idea of what's coming.  If you didn't, well, then you're in for a treat (of the tasty statistical analysis variety).

Basically, what we're doing here is analyzing the numbers.  I know that sounds remarkably unsexy, but if you stick with this I hope you'll find that this analysis can be very illuminating, despite its relative simplicity.  As football fans, we often fall prey to accepting the analysis of talking heads, or even giving in to our own prejudices, and end up seeking out anecdotal evidence to support our opinions during the games.  This series is where we take a look back and see if the numbers bear out those opinions, or if we were being wrongheaded all season.

As the calendar keeps moving, this will be the last of our post-season analysis, and will be a three-part series, looking at offense, defense, and turnovers.  Today - let's see how the boys in crimson did while holding the ball last year.

Here are the raw numbers: 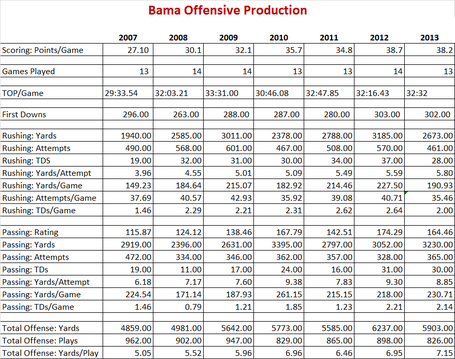 After just a cursory glance, one truth becomes clear - the 2013 offense was not a bad offense.  The next thought that might pass through your mind?  Those rushing numbers - a drop by 400 yards and 9 touchdowns? WOOF.  Of course, as is often the case, the devil is in the details, and we'll soon see the cause behind this precipitous decline.

But first, the only category that matters... points. 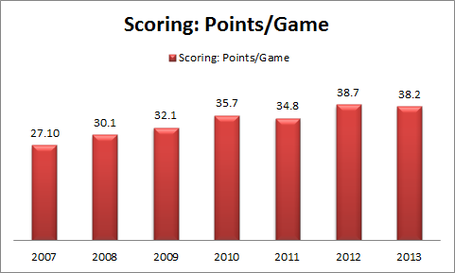 A nice, steady climb, that graph.  Of course, we did have a slight decline from '12 to '13 (-1.29%), but on the whole this is still a very positive trend, especially when you consider that this "down" year still ranks as the second best scoring offense in the Saban era.

On the whole, scoring production has been increasing at an average rate of 6.05% every year since Saban took the helm.

Next, let's take a look at the yardage the team managed to rack up. 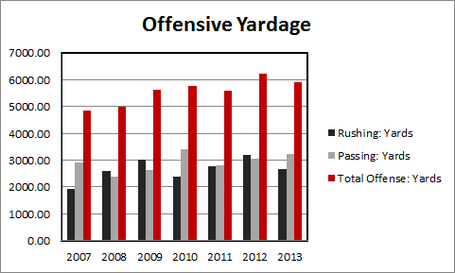 Unsurprisingly, the total yards bars seem to closely mirror those in the scoring table above.  The key thing to take away from this chart is the balance in production.  2011 and 2012 were about as balance as physically possible, and they resulted in national championship.  2010 was about as unbalanced as you'd expect to ever see from a Saban offense, and they lost 3 games.  2013 and 2009 look like they're pretty close, and one managed to slip by their trip up game (Rocky Block), while the other stubbed its toe (some game that I don't recall and refuse to acknowledge).  Yes, defense wins championships.  Apparently, so does balanced production.

If you just look at this chart, you might think that the 2013 offense took a step back, but this is a bit misleading since these different teams played different numbers of games.  If you normalize for number of games played, though, a different story arises.  When looking at yards per game, the 2013 team ranks in as the best offense under Saban (454.08 in 2013 beats out the second best unit (445.50 in 2012) by a decent margin).

Next up, we have yards per play. 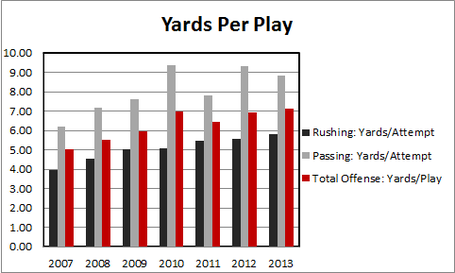 It may not jump out to you immediately, but this chart may hold one of the biggest surprises of this entire piece: rushing yards per attempt were actually up over last year (5.59 in '12 to 5.80 in '13, or a 3.77% increase).  Stand up if you closed the book on the 2013 season thinking this was the case.  Now sit down, you liar.

On the whole, Saban's offenses at Bama have been averaging a 6.21% increase every year in total yards per play.  Obviously that number dipped last year, and you would expect that it would start to slow down significantly, as we start to approach a logical limit to how many yards per play a team can reasonably be expected to average.

So what is going on here?  So far, we know that scoring production is down (minimally), and that the 2013 squad is unexpectedly top dog in several metrics (including yards per game, rush yards per attempt, and total yards per attempt).  Is it possible that Nussmeier received a bit of an unfair rap (obvious misuse of Derrick Henry in the Iron Bowl/Sugar Bowl aside)?  Let's take a look at a couple more metrics, then we'll try to parse this out. 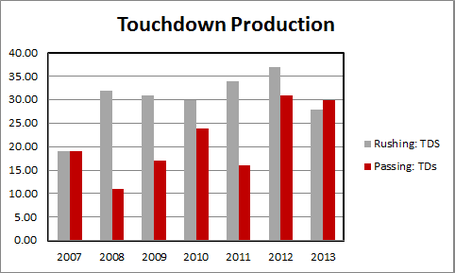 Not... great.  Yes, passing touchdowns were once again as high as ever, but those rushing touchdowns - yikes.  The total rushing touchdowns were as low as they've been since 2007, and we normally don't even like to use 2007 as any kind of benchmark, so let's agree that the touchdown production on the ground in 2013 was the worst yet under Saban.  I haven't run the numbers yet, so this isn't really a spoiler, but I have a sneaking suspicion that the answer to this particular question will come into focus two weeks from now when we're analyzing the turnovers.

For now, we'll just have to look at our final metric and try to draw conclusions from there. 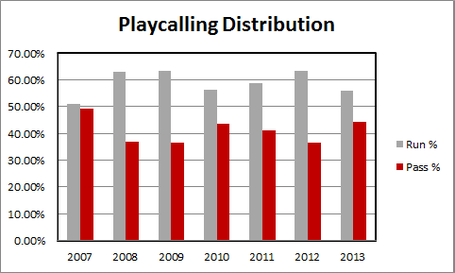 Ah, yes.  The mythical "balance" to which every team is supposed to aspire.  Fans and talking heads alike tout its importance... until we're actually given balance, of course.  The 2013 unit was the most balance yet under Saban (not counting 2007), and if you listened at all to the fans you know - they hated it.  Nussmeier brought the most balanced offense we've seen yet.  The balance helped lead to the most productive unit Saban has had in several metrics, and yet the offense wasn't enough for us fans.  Why?

We might think that the high yards per play number indicates a "boom or bust" system, and this is what frustrated fans.  Nope.  This unit also is the best Saban has had in "first downs per game" (23.23 in 2013, a full 7.34% better than the 2012 unit).  That would seem to indicate this unit was well capable of methodical drives.

So, who (or what) is at fault here?  My conclusion?  Maybe nobody.  Maybe this entire gripefest has been largely unwarranted.  Yes, Nussmeier made some unquestionably bad calls in the Iron Bowl and Sugar Bowl.  But if we kick that field goal to end the Iron Bowl and go on to win the national championship, do the gripes still happen?  Winning heals most things, and losing brings out the blades.

Time will tell, but maybe we shouldn't have been laughing so loudly when Michigan scooped up Nuss.

**All stats for this piece are taken from cfbstats.com**