If you have never been a softball fan before this weekend, you have to have fallen in love with it now. The Alabama Crimson Tide has won 8 straight in the post-season and won our hearts with their heart!

After blowing through the Regional, the Tide had two one-run victories against Nebraska in the Super Regional to gain admittance into the Women's College World Series.

Bama pitcher Jaclyn Jackie J-Train Traina has been nothing less than spectacular. Right off the bat, Alabama faced the defending softball National Champs in Oklahoma. The second batter that she faced, Shelby Pendley, hit a solo home run. But from there on out, it was lights out. Traina struck out 9 and did not give up another hit. The Sooners did score an unearned run in the fourth inning but it wasn't enough.

Traina threw another 5.2 innings of no-hit ball in Game 2 against Kentucky. The Wildcats managed to load the bases in the seventh inning but Traina struck out the next batter and then coaxed a slick double play to end the game. Add another 6 Ks to her total.

Against the #1 seed Oregon, Traina was again on top of her game with another complete game, giving up 4 hits, 0 runs, and striking out 8.

A DIFFERENT HERO EVERY NIGHT 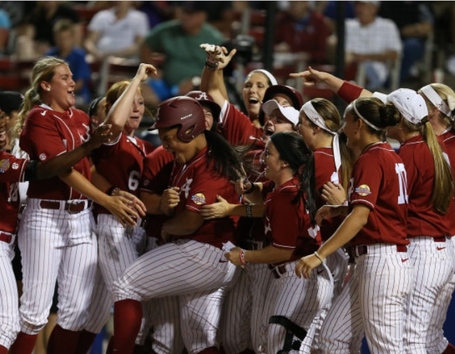 The ladies the love the long ball. The Crimson Tide has hit four round-trippers in the three games with all coming by different players. Peyton Grantham's three-run bomb and Jadyn Spencer 2-run dinger an inning later, broke the Oklahoma hearts. Leona Lafaele four-bagger against UK's standout pitcher Kelsey Nunley was all the scoring the Tide would need. Haylie McCleney had a solo shot against All-American Cheridan Hawkins in Sunday's game against Oregon.

Alabama will now face the Florida Gators in a best of three series. The first team to win two games takes the National Championship. There will be an open thread this evening.