Statistical Look Ahead to 2014: Where Must Alabama Improve?

RBR kicks off its 2014 season preview with a statistical look ahead to what areas Alabama needs to improve on the most. Oddly enough, one area isn't in fumbles.

Share All sharing options for: Statistical Look Ahead to 2014: Where Must Alabama Improve?

Rival fans can roll their eyes all they want but at Alabama, or more specifically Alabama under Nick Saban, a successful season is determined by championships won and lost. Unfortunately, if you measure 2013 up to that standard, the only conclusion that could possibly be made is that the season was an unsuccessful one. Yes, 11 wins and a Sugar Bowl berth are nice and certainly nothing to thumb your nose at. However, losing to Auburn and Oklahoma in consecutive games and then watching our arch rival battle FSU for the national title was not how we thought the season would end, especially at this point last year.

Truth: Alabama didn't lose the national championship based on a dramatic drop-off in one statistical area. In fact, if you look at raw stats from 2013, the team actually improved  in some areas from their 2012 championship campaign. 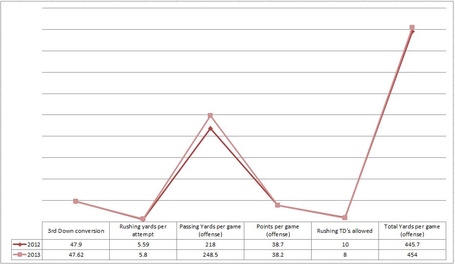 Of course, raw stats don't tell the whole story but many fans have a false understanding of how the team performed in 2013. A prime example of our mistaken memories is found in fumbles. Guess how many fumbles the team lost in 2012. Twelve. In 2013? Yep, just ten. (That's a minus two in this column for those who struggle with math)

Even Football Outsiders' advanced stats tell a different story than the one most of us remember. At the end of 2013, Alabama ranked 10th in offense, 5th in defense and 2nd in the combined rankings. Compare that to 2012, and those rankings are 4th, 4th and 1st, respectfully. So even though the team lost two games, it's not as if the offense and defense all of a sudden became a middling ACC team. It's just that when we needed the offense to score or the defense to get a stop, they didn't.

Again, you can't point to this stat or that one or the offense as a whole or the defense and come to a clear answer on why Alabama didn't repeat as champions. We just didn't and that should still hurt. 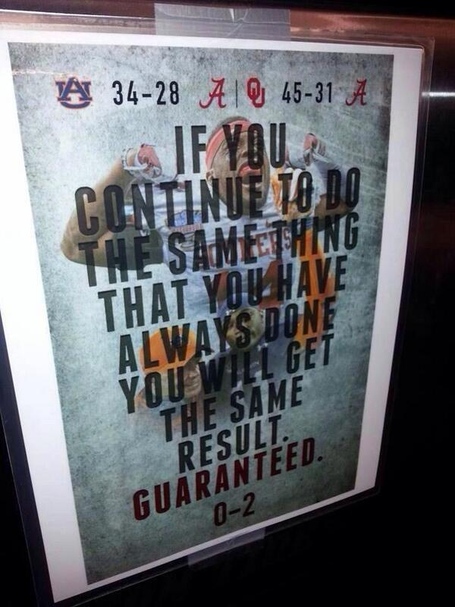 However, though we may not be able to place all the blame on a stat or two, there are a few statistical inconsistencies that we can look at that occurred throughout the season that may enlighten us to where the team failed or at least struggled to maintain the high standard our coach sets each and every season.

First up, the most glaring flip flopped stat of the entire year, mainly because that loss cost us a shot at two championships. #NeverForget

Leading up to the Iron Bowl, the Alabama defense was allowing just  2.8 yards per rush. However, against Auburn that number increased to 5.69. NOTE TO SELF: Allowing 5.69 ypc will NOT win football games, unless you're Auburn :(

Sure, -2.8 ypc looks great against the likes of Ole Miss and Mississippi State but against the better rushing teams we faced,outside of LSU, the 'Bama front seven consistently failed to hold teams to under 4 yards per rush.. Va Tech, A&M (thanks to Manziel), Arkansas, Tennessee and Auburn all rushed for over 4 ypc. Only once under Saban has a 'Bama defense allowed five teams to average that many yards per carry and that came in 2010. Coincidence? No, not really.

The hallmark of any good offense is its ability to score points in the red zone. This was not an issue for the offense in 2012 when that team scored on 90% of their trips inside the RZ, which was good for 13th in the nation. (46 of the 56 scores came by the way of a touchdown).

However, in 2013 that number plummeted to 79%, which dropped us to 86th. What is even more depressing is that in our two losses, the Alabama offense had a total of 10 red zone attempts (6 Auburn, 4 OU) and only came away with 5 scores (4 TD's). When you lose a game in the last second, a good bit of the blame can be put on failing to score when you get in the red zone. (or on the missed FG return unit)

Don't feel too bad for the offense because the defense is not without blame. Their over-all RZ numbers may look respectable year over year (68% in '13, 65% in '12) but in 2013 guess what their RZ scoring percentage was in our two losses alone...

Sadly that isn't a typo. Against Auburn and OU, our defense allowed the opposing offense to score every time they entered the RZ and none of the scores were field goals.

Damn. That one hurts.

Generally speaking I'm not one to put much hope in a team's ability to create or prevent turnovers. This is mainly due to the luck involved in not only generating turnovers but also a team holding on to the ball, especially fumble recovery. With a weird bounce here and a bounce there T.O.M. can be completely flipped on its head. The reason I do mention it here is because of the vast differences from 2012-2013. We aren't talking about a +/- four turnovers from one year to the next.

Again, a bounce here and there and this stat would be completely irrelevant but the fact remains, though the giveaways from year to year stayed about the same, the defense had ten fewer takeaways. And you can't even blame how the ball bounced for the drop because the team only had three fewer fumble recoveries. Imagine had our corners been able to intercept the ball eight more times? Especially if a few of them came against Auburn. Or in the case of the OU game, imagine had AJ NOT thrown two interceptions or the team had NOT lost three fumbles? Actually, don't imagine that because it'll bring the feelings back.

At this point under Saban there are a few things we can come to expect out of Alabama each year— We'll always have a balanced offense. Rushing attempts to pass attempts will be similar and for whatever reason, tackle for loss and sacks will be frustratingly low. Also, our QB will not throw a ton of interceptions and if he does he won't be the starter very long. But if Alabama can improve on turnover margin, red zone efficiency and get the rushing ypc number back to historical trends, Bama should find itself in the thick of the college football playoff race come December*.

Hope for the best,

*I'd like to point out even with these unsightly stats, Alabama was 4th in the BCS in December of 2013 and probably would have been in the CFB Playoff anyways. #BamaProblems