To say this unit will be a strength for the Crimson Tide may be a bit of an understatement. This is the deepest set of receivers the Tide has seen during the Saban era, and is the strongest of its kind in the SEC this season. As we noted in the spring, the biggest question mark for this group heading into the season is what kind of chemistry they will have with AJ McCarron's successor as quarterback of the Tide. While most of the fanbase expects Jake Coker to eventually fill this role, officially this race is still undecided. Don't discount the potential impact of new OC Lane Kiffin - anyone who recalls his tenure as OC at Southern Cal will hope to see some of that same explosiveness in the Tide's aerial attack this year.

* Stats from the spring and fall are compiled from statistics released by the university for the two spring scrimmages, the A-Day game, and the two fall scrimmages. They are unofficial, and contain results from situational drills, etc. 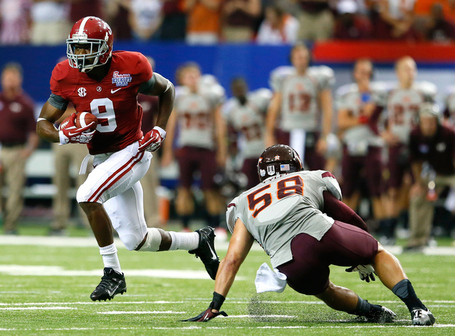 Name your platitude, he's gotten it over the summer. Unanimous preseason All-American, preseason All-SEC, every award watch list he could conceivably be on, the works. Cooper has had a strong offseason, leading the team with 31 catches, 451 yards, and 6 TDs across the spring and fall. The junior appears to be healthy heading into the season, and has an outside chance to finish the year atop most of the wide receiver categories in the school record books. Cooper is arguably the finest wide receiver in the country for 2014, and expectations are high in what is likely his final season at the Capstone.

Jones will start at the slot position he dependably filled in 2013, logging 11 receptions for 106 yards and 2 TDs over the spring and fall. A preseason All-SEC selection as a return specialist, Jones flashed some serious return skills in 2013, averaging almost 29 yards per kickoff return to go with 3 total return TDs on the year. Another senior in his last season for the Tide, Jones' dual threat contributions will be an important part of the Tide's success in 2014.

After undergoing surgery in January, White was sidelined for the entirety of the spring. Injuries have been an issue during White's career, as he fell to the knee injury plague that afflicted the Tide back in 2012. He's been 100% throughout the summer and fall though, and is a good bet to line up across the field from Cooper to start the season. A senior, this will be White's last season with the Tide.

The top wide receiver from the Tide's 2013 class, Foster tallied 10 catches for 141 yards and a TD over the spring and fall. A big, strong target at 6'3" with the hops to match, the redshirt freshman drew comparisons to Julio Jones as soon as he got on campus. He will be in the mix with White for playing time opposite Cooper this season.

Is this the year we finally see what Black can do? After a shoulder injury scrapped his first year on campus, Black offered a glimpse of his explosiveness against Georgia State last year. Stuck behind Jones at the slot position, this was really the only time we've seen Black in a true game situation. The sophomore was impressive over the spring and fall with 14 catches for 213 yards and 2 TDs, but will likely back up Jones again at the slot to start the year.

Stewart started the spring away from home, as the coaching staff had him working with the safeties early on. After moving back to the wide receivers in the third practice of the spring, the redshirt freshman put up some tantalizing numbers through the fall with 11 catches for 226 yards and 2 TDs, for a 20.5 yard per catch average. The bulk of that work came in the second spring scrimmage (66 yard TD) and the A-Day game (2 catches for 59 yards and a TD). It's unclear where he will fall on the depth chart, but look for him to get some limited snaps at the outside spots.

Another receiver from the class of 2013, Falkins is a big (6'4") target who registered 4 catches for 49 yards during the spring. The sophomore never saw the field last year but like Stewart should be in the mix for backup duty at the outside spots.

The Tide's top wide receiver recruit in the 2014 class, Cam (we're taking it back!) Sims early enrolled and was lined up behind Cooper during spring drills. Yet another big target (6'4") coming down the pipeline for the Tide, Sims logged 4 catches for 101 yards and a TD during the offseason. Given all the talent in front of him it seems unlikely Sims sees much of the field this year, but his future at the Capstone appears bright.

The tallest receiver on the roster at 6'5", Kief is another member of the 2014 recruiting class. Kief did not arrive until the summer, however, and is likely headed for a redshirt this season.

The top tight end recruit from 2013, fans of the Tide saw only brief glimpses of Howard's incredible upside last season. Lanky at 6'6" and 240 lbs, Howard showed some impressive wheels on a 52 yard TD against LSU. Howard actually led the team in yards per catch last year with a 19.2 yard average (outside of Derrick Henry's sole reception, a 61 yard TD against Oklahoma), but seemed to be forgotten by former OC Doug Nussmeier at times. A tight end this talented should get more than 14 touches in a season, and hopefully Kiffin finds a way to get the sophomore some more looks this year. Howard had 3 catches for 38 yards in the second scrimmage of the spring, was named preseason All-SEC, and is on the watch list for the Mackey Award.

Vogler saw a lot of the field last season but was subject to the same neglect as Howard, with only 8 catches on the year. Primarily used for blocking purposes but with some underrated receiving skills, Vogler logged 1 catch for 10 yards in the A-Day game. Vogler is a senior in his last season for the Tide.

A JUCO transfer from the class of 2014, not much has been said about Fluornoy-Smith since his arrival in the spring. A former Georgia Bulldog, Fluornoy-Smith appeared in eight games for UGA before electing to transfer after some legal issues. Fluornoy-Smith is a smaller TE at 6'3", but has good speed and may push Vogler for time spelling Howard if he continues to progress in learning the offense. If nothing else, hopefully he sees playing time this year so we can hear Uncle Verne mangle his name.

Kurt Freitag, Malcolm Faciane, Corey McCarron, and Kieran Williams are all still on the roster, but there is no evidence they will contribute much outside of blocking and mop-up duty. Dakota Ball has shifted over from the defensive line and worked with the tight ends throughout camp, and may fill the "6th lineman" role we saw Brandon Greene in last year.