By way of introduction, Spicy Grilled Okra with Tzatziki Sauce.

Share All sharing options for: RBR Tailgate: A Pre-Season Appetizer

Okra is a strange case in the South. While most love it and gladly wolf it down, even those not usually inclined toward such things suffer its presence on their plates.  All but the most invested green vegetable detractors will occasionally deign to enjoy it in a way they never would broccoli or asparagus. I have several theories as to why, but the most probable to me is that in the land of the meat-and-three, creamed corn and mashed potatoes is one short of a full order and with the exception of mushy carrots all the other options tend to be chlorophylled. Okra holds one huge advantage over the other standard green diner choices. It's generally fried. With all the vitamins and minerals replaced with fatty oils, the eater's guard is down and they find, much like with that girl - the one you met after a few drinks at that party - whose number you held on to for far too long, sometimes your usual standards are too constrictive. It's just a theory.

Or the hater of green vegetables realizes that with the seeds on the inside it's a green fruit and as such, not deserving of their scorn. Fruit or vegetable, for the rest of us it's a pod of fibrous, woody, goodness. This very simple recipe is the combination of appetizers I recently had at two different Birmingham restaurants.

(For the amounts of each ingredient I'm assuming eight people)

If allowed to grow too long they can get pretty tough, so when picking out okra don't choose any that are more than around four inches long.

The tzatziki sauce can be made a day or two ahead of time and refrigerated until needed. Simply combine the yogurt, cucumber, dill, and garlic and mix well. Slowly add a few dashes of lemon juice, stir, taste, repeat if needed, and when you get to an acidity that suits you, salt to taste.

Purists argue whether dill or mint should be used in this sauce with both sides and the occasional anarchist advocating the blending of the two, claiming vindication from the old country. It's an argument that's tearing the Peloponnesus apart. I have no dog in this fight. I like both, and maybe all three, but in this case I chose dill, not for an imagined Platonic ideal, but because I think mint and hot sauce clash. Feel free to make your own decision. 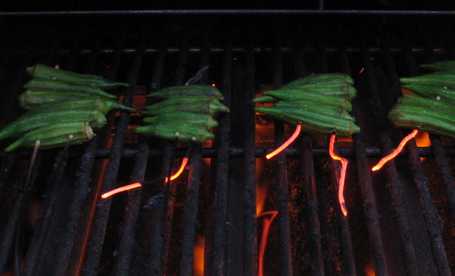 Heat, clean and adjust your grill to a medium high. Toss the okra lightly in olive oil and then salt, also lightly. Using bamboo skewers that have been soaking in water for at least twenty minutes (and no rationalizing that wet is wet as I did after ten minutes because that just makes bamboo ash) spear four or five pods on two skewers so they look like railroad cross ties. Grill for four or five minutes a side or until the skin is soft but not mushy. Remove the skewers and toss in a bowl with hot sauce adding more until it's just slightly hotter, considering that the tzatziki sauce is going to negate some of that heat, than you normally prefer.  Tabasco is a great choice but it's incorporated in Louisiana and it would be tragic if dollars spent at an Alabama tailgate were used via a well heeled pepper-and-vinegar-pushing booster to convince the next in a seemingly endless rotation of Gallic named "x"-dropping, quarterback-mauling defensive linemen to spend his eligibility at LSU.  I prefer Alabama Sunshine from Fayette, http://www.alabamasunshine.com, but stick to the The Original label. The XXX Black Label is best reserved for practical jokes.

Spread the okra on a plate or platter with a bowl of Tzatziki nearby and enjoy. As I said, very simple, but delicious and not something that will fill you up so much that you must curtail your intended barbeque intake. And speaking of meat, the season is almost two weeks away and there will be main courses aplenty.  I hope this whets your appetite.

A quick note: my plan for the season is to post every week, hopefully midweek, allowing anyone wanting to give the dish a try enough time to shop and prep. I'm gearing recipes anticipating home games for the tailgater; heavy on day ahead prep that can be stored in a cooler and finished with nothing more than a grill. Away game recipes will assume that the cook is at home or a friend's house and wants to watch tv more than cook. So again, heavy on prior preparation, but this time I'm assuming you have the capacity to boil water and that a blender or food processor is at hand. I may decide this is a terrible plan as the season goes on but it's my intent for now. Roll Tide.