The defense looks to rebound from a disappointing end to last season with a lot of fresh faces.

Statistically speaking, Alabama's defensive front seven was a stingy unit in 2013, allowing just over 286 yards and around 14 points per game.  However, relatively poor defensive showings against the dreaded HUNH (Hurry Up No Huddle) offenses of Texas A&M, Auburn and Oklahoma have led to questions in the offseason about what Nick Saban/Kirby Smart can do to adjust.

It remains to be seen if there will be any significant changes in scheme or style of play, but frankly, I doubt there will.  Saban and Smart have a proven record of success, and I suspect that their adjustments will be at least as much mental as they are physical.  That being said, the Tide have a couple of significant gaps to fill, and a wealth of talent to work with. 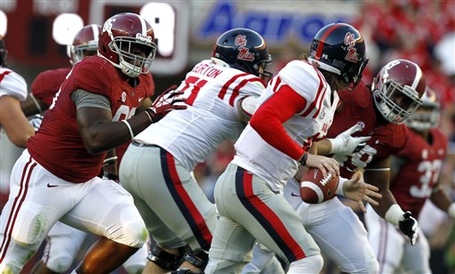 Summary: Attrition has plagued the D-line in fall camp, with Brandon Ivory (Sr. - DT) and Jarran Reed (Jr. - DT) both serving an early suspension for violating team rules, and A'Shawn Robinson (So. - DT) suffering a sprained knee.  Ivory and Reed missed significant practice time and they both will have to work their way back to the starting lineup.  Ivory is the unit's most experienced player - a 12-game starter last year - but frankly has been a bit of an underperformer for all his 6-4 308-pound frame.  In 2013, he amassed 24 tackles, 1.5 for loss, and no sacks, the lowest numbers for a starting nose tackle at Alabama since 2007 BC (Before Cody).

Reed is a transfer from East Mississippi Community College, where he played with junior D.J. Pettway last season.  Arrested for DUI in July, it remains to be seen whether he has the maturity to become the starter, but he certainly has the skills.  A'Shawn Robinson, on the other hand, is a budding star - a 320-pound monster who played in all 13 games last year and started two.  Robinson can line up at both DT and NT, and many of the team's hopes for improved line play rest on his shoulders.  Alabama needs Robinson, who led the team in sacks last year as a true freshman, healthy, and the coaching staff has been careful with him since his injury.  All three started at A-Day, and are expected to be ready to play against West Virginia.  However, reps have been somewhat limited for the trio so far in fall camp, and other players are making the most of their opportunities with the first team.

Pettway, who spent last year at EMCC after playing as a situational end for the Tide in 2012, has spent some time in camp working with the first group.  So have sophomores Dalvin Tomlinson and Jonathan Allen.  Tomlinson would have been Alabama's third defensive end last year if not for a season-ending knee injury in the first game.  Allen saw his playing time increase as a freshman last year and was one of the top defensive playmakers at A-Day.  Junior Darren Lake, sophomore Korren Kirven and freshman Josh Frazier all look to contribute at the tackle spot as well.

All of this extra practice for the second and third group players could actually benefit the team, if the starters can also stay healthy.  Bama's early schedule is manageable, and the promise of a steady rotation of players should benefit a group that is deep on talent but relatively short on experience. 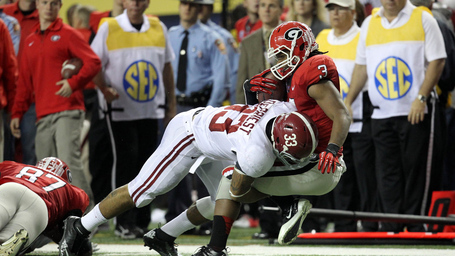 Trey DePriest will be the signal caller for Alabama's defense in 2014. (via cdn2.sbnation.com)

Summary: While the linebacker corps has its share of talent, Trey DePriest is the Tide's most reliable returning player.  While DePriest finished third on the team with 65 tackles last year, his biggest challenge will be to pick up the mantle of leadership from departed star C.J. Mosley.  DePriest came out of the game in most nickel situations last year, and he will be looking to prove to NFL scouts that he's an every down player this season.  Unfortunately, he doesn't have Mosley's quickness to the edge, tackling skills, or his knack for being in the right place at the right time.  DePriest's play over his career so far has been solid, but rather unspectacular.  The senior suffered a minor knee sprain early in camp, but should be back at full speed for West Virginia.  DePriest needs to stay healthy as the coaching staff will rely on him to be the signal-caller for the defense.

After DePriest, Denzel Devall is the most experienced linebacker.  He split time with Xzavier Dickson at the Jack linebacker spot, a position where the player frequently puts a hand down as an extra defensive lineman.  While Devall was a consistent starter, he finished 2013 as only the team's tenth best tackler with 29.  He also has been limited in practice of late with an unspecified left leg injury.  In the meantime, Dickson and Dillon Lee appear to be competing at the outside positions.

At the inside linebacker spots, three players have seen heavy rotation in fall camp - Reggie Ragland, Reuben Foster and Shaun Dion Hamilton.  Ragland, a junior, has the most experience, having seen action in 13 games last year as the backup for Mosley.  Hamilton, a true freshman, has none, but he has split time between the first and second groups in fall camp.  It will be nice to see him mature and improve as the season rolls along.

Reuben Foster, the talented sophomore, has the skills and natural ability to be a superstar.  Foster is a playmaker with a tendency to go for big hits.  Unfortunately, this has led to a string of injuries - a stinger in spring practice, a mild concussion in the A-Day game, and at least two occasions in fall camp last year where he reportedly knocked himself out slamming into a running back.  If he can learn to keep his head up and tackle rather than just deliver a slobber-knocker, he should be a major contributor this year. 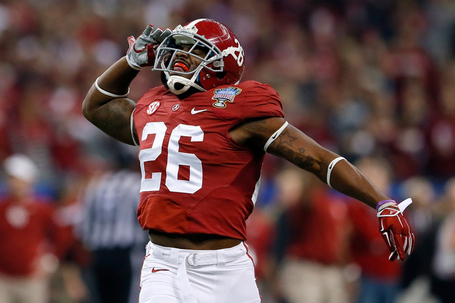 Landon Collins is ready for 2014. (via cdn1.sbnation.com)

Summary: With the possible exception of the special teams unit, the defensive secondary comes into the 2014 season as the biggest question mark for the Tide. Abused at times last year (Texas A&M, LSU, Oklahoma), the group also lost two of its most reliable players in Ha Ha Clinton-Dix and Sunseri. In fact, none of the four starters from the 2013 season opener remain with the team. In response, the coaching staff not only signed two of the best defensive back prospects in the country in Tony Brown and Marlon Humphrey, but also moved defensive coordinator Kirby Smart back to direct responsibility for the secondary with the departure of Greg Brown to Louisville.

Junior Landon Collins returns as one of only two players who has a lock on his position. The free safety finished 2013 with the second-most tackles on the team, with 70, and will play a pivotal role in the defense’s success or failure this season. Already on the watch list for several national awards, Collins might be the best player on a defense loaded with potential. At the star position, the extra defensive back in nickel formations, senior Jarrick Williams also has a solid hold on his spot. Williams started ten games last season, one more than Collins.

At strong safety, Nick Perry is the likely starter, with Geno Smith missing a substantial portion of fall camp with a knee sprain. Bradley Sylve and Cyrus Jones are currently holding down the corner positions. Coach Saban has been pleased with Jones in camp so far, which is good, because he needs to improve. Maurice Smith has practiced with the first group at the dimeback (sixth DB) spot.

As the season progresses, three true freshman will look to make an impact in the secondary as well. Brown and Humphrey have been working at right and left corner, respectively, with the second group. Brown, an early enrollee, made a big splash during A-Day despite dealing with a freak injury sustained while jumping hurdles with the track team. Humphrey, whose father Bobby was a former great for the Tide, should see his playing time increase as he gets up to speed. Laurence "Hootie" Jones has practiced consistently with the second secondary group, and should see action in relief of Collins.

Finally, sophomore cornerback Eddie Jackson is still rehabbing his knee after surgery in April. He is apparently ahead of schedule, but the coaching staff are being cautious with him. Still, as the season progresses we may well see him contribute some at corner.