Share All sharing options for: Processing the Numbers, Football Edition | A Primer

Starting this year we will be running a preview of each week's game based on advanced metrics*. Over the past several years the advanced statistics community has produced several metrics for college football that allow for a different, more powerful viewpoint from your traditional statistics like yards per game, points per game, and the like. As an introduction to these opponent previews, below is a discussion of some of the metrics we'll be using this season, some of the concepts behind those metrics, and finally an overview of how the Tide has finished over the last several seasons (hint: really, really well).

* You'll see articles on this subject (and me) refer to advanced statistics, advanced metrics, analytics, etc. - these are all different terms for the same thing.

These concepts are in no way comprehensive with regards to how these metrics are developed, but in my opinion they are very important things to keep in mind when reading about analytics and really whenever you are watching football. Each of these is presented from the offense's viewpoint, but in general they also apply in some sense to the defensive side of the ball.

... it's about efficiency and explosiveness.

Total yardage tells you that a team got from point A to point B, and absolutely nothing else. Even when you bring in the number of plays it took to get that yardage (such that you can generate a yards per play metric), it's still not clear how that yardage was gained. 10 yards per play during a drive is great - but did you get it all in one chunk after some relative ineptitude at the start of that drive? Or did you dominate your opponent on every single play of that drive?

Enter efficiency and explosiveness. A team that lives and dies on the big play may look ok on explosiveness measures, but they didn't get there efficiently. Consider 2013 Miami, who finished 6th in the country in explosive drive percentage (percentage of drives with more than 10 yards per play), but a middling 37th in available yards percentage (amount of yardage earned divided by possible yards). This indicates Miami was capable of explosive play, but maybe not very consistently. Contrast that with Oregon - who finished 8th in explosive drive percentage but 3rd in available yards percentage, indicating similar explosive ability as Miami but at a much higher level of consistency. Oregon was one of the best offenses in the country last year by any measure, whereas Miami - while still a top 15 offense - was in a little different league.

The point here is that a good statistical approach to rating and comparing offenses has to take both aspects of performance (efficiency and explosiveness) into account - fortunately, all of the metrics discussed later on do just that.

Possessing the ball on your opponent's 20 yard line is more likely to result in points than possessing it on your own 20; 20 yard touchdowns are slightly more common than 80 yard ones, and I have not heard of anyone hitting an 80 yard field goal yet. In addition, if you stall out on your own 20, you're probably going to set your opponent up with good field position and a great chance to score. That general rule applies to every yard line - the closer to the opponent's end zone you are, the better off you are (and the worse off they are), which is why starting field position is really, really important.

With thousands of possessions worth of data at your disposal, you can assign point values to individual yard lines based on the expected value of points scored when an offense attains that line on the field. This is a very important concept, and there are a few ways to go about implementing it.

The Hidden Game of Football might have been the first place this concept was considered, and advocates valuing yard lines with "net points" based on which team would be expected to score next from that point on the field. Many years later, Bill Connelly of Football Study Hall developed equivalent points, describing the number of points an offense could expect to score on average once they've attained a spot on the field.

For 2013, equivalent points was updated to incorporate the "net points" idea from The Hidden Game of Football, producing net equivalent points. The principle of this change and the resulting chart, gently lifted from Football Outsiders:

So I attempted a compromise. Instead of using my original equivalent points definition, I met the Hidden Game's net points idea halfway. I created an equivalent point value based on the number of points you can expect to score on a drive that involves a given yard line i and the average number of points an opponent typically scores on its next drive. I also smoothed out the rough spots a bit. So instead of the yardage chart above, you get something like this: 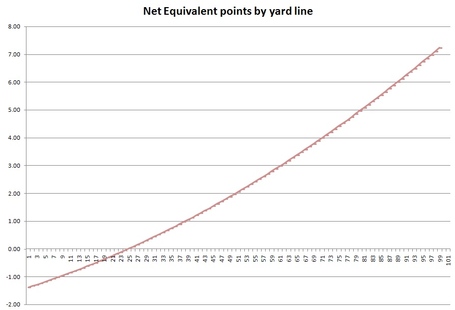 Values at every yard line changed from the original equivalent points chart, but the main difference is at either end of the field. At first glance this looks like nonsense, but there is sound logic behind it. The easiest way to think about this chart is to consider the yard lines as average starting field position (SFP). If your SFP, on average, is your own 1 yard line (implying great offensive success for your opponent), over time you're going to lose by a whole lot of points. Break that out per possession, and you get a negative net points value. Conversely, if your average SFP is your opponent's 1 yard line (represented by the 99 line in the chart above, and implying a long day for your opponent), you are going to score an insane amount of points. Break that out per possession, and you get a very high net points value. Apply that to every yard line in between, and you'll get something like the chart above. That's not really what this chart is showing you, but thinking about it in this fashion makes it a little more accessible in my opinion.

The real question is what do you do with this tool? With this information in hand, you can now assign a numerical value to every play that occurs in a game (regardless of whether or not that play resulted in actual points being put on the board), accounting for how valuable that yardage was with respect to field position. Pick up 8 yards from your own 1 yard line, you've earned about 0.4 equivalent net points. Pick up 8 yards from your opponent's 15 though, and you've earned 0.96 equivalent net points. This becomes very important when constructing play-based advanced metrics like S&P+, which is discussed below.

Not every down is the same

If you were the play-caller, would you use the same section of the playbook on 2nd and 2 as you do on 3rd and 15? Maybe if you were Mike Leach you would, but most coaches change their approach on later downs and/or with large chunks of yardage to go.

This is reflected in the concept of "Standard Downs" and "Passing Downs." From Football Outsiders:

Passing Downs are defined as:

All other downs are Standard Downs.

Simply put, statistics during garbage time are meaningless when judging the quality of a team. When there's 5 minutes left and you're down by 28, the other team probably has the backups in. If you're up by 28 in the same scenario, you're probably running the ball more than you would normally. Personnel and philosophies change, so numbers generated during that time don't provide an accurate assessment of the teams. The definition of garbage time, again from Football Outsiders:

S&P+ is a ratings system developed by Bill Connelly that evaluates team performance on a play-by-play basis. There are three primary components that go into S&P, which is then opponent-adjusted into S&P+, as stated over at Football Outsiders:

S&P+ only takes into account possessions that matter - garbage time is filtered out. While generally offered as a single number, S&P+ is calculated on both standard and passing downs, for both rushing and passing, on both offense and defense, offering the ability to assess the performance of specific units in addition to overall team performance. As stated above, a drive-efficiency aspect was added to the formula in February 2013 that shifted S&P+ from a purely play-based metric to a hybrid approach.

FEI is a ratings system developed by Brian Fremeau that evaluates team performance on a drive-by-drive basis. FEI generates a number of components which are compiled into Game Efficiency (GE), which is defined over at Football Outsiders:

Game Efficiency (GE) is the composite possession-by-possession efficiency of a team over the course of a game, a measurement of the success of its offensive, defensive, and special teams units’ essential goals: to maximize the team’s own scoring opportunities and to minimize those of its opponent. FEI ratings take the season-long GE data and adjust for opponent, placing special emphasis on quality performance against good teams, win or lose.

Similarly to S&P+, FEI only accounts for meaningful possessions, filtering out possessions in garbage time as well as end-of-half kneel-downs, etc. FEI splits are calculated for offense, defense, and special teams; a field position rating is also available.

F/+ is the combination of S&P+ and FEI, and serves as Football Outsiders' official college football rankings. By combining the two metrics described above, F/+ captures offensive efficiency and explosiveness, defensive quality, and special teams effectiveness into a single number, which describes overall team quality with respect to the average team for that season. It's offered as this combined rating, as well as splits for offense, defense, and special teams, again with respect to the average team for that season. This is helpful when trying to compare teams that tend to be good at everything (like 2013 Alabama, the only team to finish in the top 10 in all three F/+ components last season) with teams that are really good at one phase of the game but sorely lacking in others (like 2013 Texas A&M, who had the best offense in the country but a woefully inadequate defense). The special teams component is much smaller than the other two, but I don't think I need to tell anyone here that poor special teams play will cost you games you should have won.

SO WHAT ABOUT THE TIDE?

As you might expect given the level of on-field success under Saban, Alabama has put up sparkling numbers in the advanced metrics. Below is a table showing Alabama's finish in the F/+ components during the Saban era:

The Tide's been pretty good the last few years.

The outstanding 2011 Alabama squad currently has the highest combined F/+ score in the database (going back to 2005) at +53.9%; the defensive F/+ of +37.1% for that team would have been fourth in the overall rankings from last season - that defense was really special.

That being said, it should be noted that F/+ ratings are not generally comparable across years due to the steady increase of programs in FBS in this era. These recent call-ups tend to fall toward the lower end of the F/+ spectrum, which drags your "average" team down a bit, inflating the rating of your top teams slightly. It's entirely possible that 2005 Texas or 2008 Florida would have had higher F/+ scores than 2011 Alabama, but there's no way accurately verify that using the information that we have available.