Alabama Football 2014 Preview: Why T.J. Yeldon and the Offensive Line Should Make You Excited

Film analysis into successes of the Alabama running game in 2013 that should make fans excited about 2014.

Share All sharing options for: Alabama Football 2014 Preview: Why T.J. Yeldon and the Offensive Line Should Make You Excited

T.J. Yeldon's 24-yard touchdown run last year against the Kentucky Wildcats is a prime example of why Yeldon and the offensive line should give Tide fans no reason to worry about the success of the offense in 2014.This run came towards the end of the first half when Alabama had a 10-0 lead.  Without this play, Alabama would probably still have easily won this clunker of a game that saw Kentucky gain 170 yards the entire game.

Up until this point Alabama had mainly gotten in it's own way of totally destroying the Wildcats by giving up two fumbles inside the red zone.  Despite the fact that this play was against Kentucky, one of the worst teams in the SEC last season, and probably had no real consequences towards the outcome of the game, analysis of the play is important to discover how Alabama meshes solid blocking with Yeldon's excellent running ability.

On 2nd and 10 from the Kentucky 24-yard line, Alabama lines up in a one-back formation and stacks the right side of the field.  Brian Vogler lines up off the line of scrimmage, Kevin Norwood takes the role of slot receiver, and constant deep-threat Amari Cooper lines up out wide.  O.J. Howard is the lone skill player on the left as he lines up on the line next to Arie Kouandjio.  T.J. Yeldon lines up seven yards behind A.J. McCarron.  Considering the circumstances (10 point lead, bad team, near the end of the half, manageable second down, near the red zone), Alabama's playbook is wide open.

Kentucky lines up defensively in a 3-4 formation with the "Will" linebacker on the left side of Alabama's formation creeping up close to the line of scrimmage.  The linebacker playing the "Sam" position, #45 Josh Forrest, stays about 3 yards off the line of scrimmage while the two inside linebackers as well as the cornerbacks on the outside are lined up about six yards off the line.  Two safeties set up way back out of the view of the camera.  Kentucky's formation respects the run and the pass and does not seem to give Alabama an advantage in any way.  Yet, because of the vast difference in on-the-field talent, Alabama shows that it needs no pre-snap advantage.

As McCarron snaps the ball and feeds the handoff to Yeldon as he moves to the right side of the line, center Ryan Kelly and right tackle Austin Shepherd engage the two Kentucky linemen lined up on the right side.  Vogler moves forward to block Forrest just past the line of scrimmage.  What follows is an incredible example of how to open a hole for a running back.  Without using any double teams, Kelly, Shepherd, and Vogler manage to open the C gap on the right side of the line wide enough for Yeldon to get through without having to slow down.  At the snap, the two guards on the Alabama line, Arie Kouandjio and Anthony Steen, run up the field to block the two Kentucky inside linebackers.

The huge bodies of Kouandjio and Steen are too much for the undersized Kentucky linebackers and the two guards are able to push the Wildcats further back.  As Yeldon busts through the hole created at the line of scrimmage, he has plenty of room to maneuver and it's at this point that he uses his excellent vision and running ability to turn this play into a touchdown. 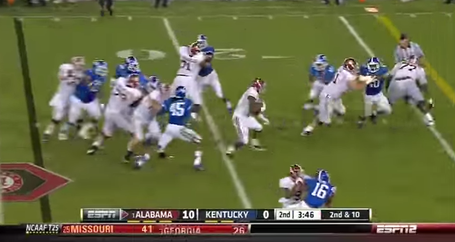 At this point, the Kentucky defense crashes to the middle of the field towards Yeldon.  Safety Josh Harris, who started the play out of the view of the camera and appears to be unblocked, comes from the defensive backfield towards Yeldon and attempts a tackle at Yeldon's feet.  Yeldon cuts to his right and Harris is only able to get his hands on Yeldon's feet.  After Harris's laughable attempt at a tackle, Yeldon has six Kentucky defenders near him that potentially have a chance to make a tackle. 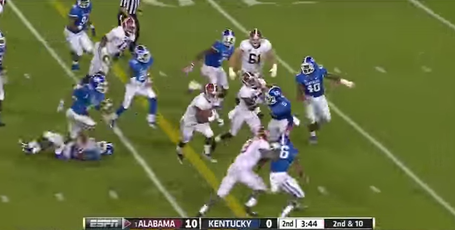 Kevin Norwood attempts to hold his block on Kentucky defensive back Ashely Lowery (#5) but as Yeldon breaks to the right sideline Lowery is able to break free.  This play looks to be close to over as the Kentucky defenders are close to closing in on Yeldon and stopping him for a modest gain, but Yeldon is able to use his incredible speed and a great angle to get to the end zone.  He begins moving closer to the sideline while also moving vertically towards the end zone.  As Cooper holds on to his block for the entirety of the play, Yeldon is able to glide into the end zone.

This play is important to me because, due to all of the talk surrounding the quarterback race, the emergence of Derrick Henry, and new offensive coordinator Lane Kiffin, one of the best playmakers and offensive lines in the SEC are being lost in the shuffle.  The key blocks, which laid the groundwork for this touchdown run, were executed by returning starters for the Tide (Vogler, Kelly, Shepherd, and Kouandjio).  Also, and more importantly, T.J. Yeldon showcases incredible speed, vision, and footwork in this run.

So, as the season draws closer to the opener against West Virginia in Atlanta, remember this play and the excellent starters the Alabama offense has returning.