A fan's guide to turning a Thursday into a Saturday, with meat.

Share All sharing options for: RBR Tailgating: Asian Inspired Ribs For the USC vs. TAMU Game

Clearly the main event comes on Saturday at two thirty, but that doesn’t mean it’s the only event. Thursday at five the South Carolina Gamecocks kick off against the Texas A&M Aggies, heralding not just the beginning of SEC play, but the beginning of the 2014 season (No, Abilene Christian vs. Georgia State on Wednesday does not count). Under normal circumstances there wouldn’t be much to complain about. Both teams are ranked. Kevin Sumlin gets a chance to show that his offense can overcome whatever nonsense he trots out to play "defense" without the talents of a Johnny Manziel or a Mike Evens. Steve Spurrier gets a brand new quarterback to hate. This is quality football entertainment. But these are not normal circumstances. For starters, it’s Thursday. Also… that’s just about it. It’s Thursday.

This means no starting off college gameday by turning on College Gameday. No leisurely internet surfing for last minute tidbits about your team over morning coffee. No rationalizing the 11:00 beer because a game has started. No nap while a team from Mississippi plays. No brown liquor or the ensuing arguments with your brother in-law whose rosy colored glasses won’t let him see that this poor offensive line play is going to cost us somewhere down the line. And most importantly, no fall-off-the-bone meaty ribs from a grill lit before that illicit 11:00 beer, baffled against the wind and nourished with new coals over the course of half the day to maintain just the right low burn.

Thursday isn’t Saturday and unless you're Gregory XIII it's gonna stay that way. But what makes Saturday Saturday? What follows is a guide for extracting the most Saturday out of your Thursday. It won’t be perfect, but it will be enough. All it requires is a willingness to lie to yourself and others.

Start Wednesday night by mincing the garlic. Next separate the white parts of the scallions from the green and chop both. Store everything in the refrigerator overnight.

Thursday morning put the hoisin, soy sauce, honey, white bits of scallion, garlic, ginger, cayenne, and orange juice and zest in a bowl and whisk together. Liberally salt and moderately center-rightly pepper the meat. What I’m going to ask you to do next is likely to result in a modicum of controversy.

Barbequing is not grilling. Far too many people blithely and without consequence invite friends and family over for a barbeque and then serve hamburgers and hot dogs. Barbecue is slow cooking. Grilling is using fire below a metal grid. "Throw some shrimp on the Barbie!" is yet another in a long string of Antipodean lies. But this is a tangential argument. I’m not asking you to misappropriate a Taino people’s method of infusing meats with smoke and time by throwing meat over some coals for a few minutes and then pass it off as the real McCoy. I’m asking you to bypass fire completely.

Take the ribs and place them in a slow cooker or crock pot, meaty side down or against the side, and pour the hoisin/soy mixture atop it. In a last minute desperate grasp at authenticity I reached out to Tom Bagby, founder and patron saint of The Barbecutioners and maker of some of the finest--I have to single out the spicy green--barbeque sauces I’ve ever come across. When asked if crock pot-cooked meat could ever be legitimately called barbeque he responded with a one word "No." - his terseness a stinging indictment of this entire endeavor. But this is not about truth. This is about simulacrum.

He did quickly follow up with a reasoned response about the need for smoke and indirect heat and that a crock pot can make brilliant non-barbeque pulled meat and referred to his own red onion and thyme pork roast but all that really did was imbue his initial "No." with a "Why are you asking me this, you idiot?" subtext.

Anyway, set the crock pot to low and let simmer for six to eight hours. Looking at it you will reasonably worry about the liquid to meat ratio and assume that there is far too little sauce. I do that every time I make this dish. Don’t worry. The fat will render and any and all moisture is trapped beneath the cover. There will be more liquid by the time it’s done. Now go to work. "Wait." you say. "I’m leaving for work at 7:30. I don’t get home until 5:30. That’s like… mathly more hours than six to eight." I’ve anticipated your dilemma. You are leaving work early. Here's how:

Step one. Don’t eat lunch. Just trust me on this.

Step two. Technology is your friend. Many Slow cookers have timing devices on them so they can be set to start cooking at ten or to stop cooking at four. I don’t want to give the impression, one way or the other, that I’m an expert on bacterial growth on unattended cooling food should you let the ribs rest for a bit. "My crock pot will shut down at 3:30. Can I die from ingesting food left out at 170 degrees for more than an hour?" That was actually a question on a test I had to take to qualify as a "Certified Food Server" in Jefferson County. It cost $15 to take the test and if you got more than 70% or 80% or whatever you received a two year certification. If you didn’t, you got a one year certification. Keep that in mind. A food safe certified line cook, fresh from scrubbing his scabs with chicken thighs, might have gotten a zero on the test and still passed muster with Jefferson County, AL, at least for a year. $15.

Would I eat food that has been left out for an hour? Yes. Would Jefferson County Health agree with my decision? No. Let’s avoid the whole question by utilizing a different technology.

For Android devices it’s called Fake Call & SMS. Go to the Play Store and get it. I’m certain there’s an iPhone equivalent. This only works if you have an office or location based job. If you work as a tech for AT&T or any job that ignores the consumer and keeps you on the road or out of the presence of co-workers, I’m sorry. You were lost before we ever began. For the rest of you, program the app to place a fake "call" at 3:00. In the "Name" field, write (and this is for Birmingham area audiences - modify for your particular local) "St. Vincent’s Hospital." "Children’s Hospital" is far better but, counter-intuitively, only if you don’t have children. Be around coworkers with your phone face up at 3:00.

Choose carefully who you pick as witnesses. Stay away from friends or perceived allies. Ideally you will get a dire "call" from the hospital in front of a combination of the office gossip and someone with whom you are openly adversarial. Word of your mission of mercy gets out and is confirmed by the enemy. Better to use a loose acquaintance as the victim. "My child is in the hospital!" conveys immediacy, but also requires explanation on Friday. "My neighbor is in the ER with her youngest and needs me to meet her oldest when he gets home from school." gets you out of work, plausibly home by 3:30, and, should anybody from the office live near you, explains why your car is in your driveway at kickoff with no need for extensive explanation Friday morning.

When lying your way home, be sure to leave a bit of a mess on your desk. It has to appear as though you left suddenly. Do not leave this web page open on your desk (that’s a RBR Tailgating Pro Tip!). Though it might upset your sense of fair play, do not try to include a buddy in your escape and do be ready to scuttle any attempt on their part to hitch on to your ride. This isn’t The Great Escape and you don’t want to end up in the cooler. Solo missions are more likely to succeed. Your friends are big kids. Let them fend for themselves.

When you get home at 3:30ish, turn off the crock pot. Crack open a beer and drink. Turn on the SEC Network. Remove the ribs and set them aside. Pour the hoisin/soy liquid into a sauce pan, add apple cider vinegar, hot pepper jelly, and a dash of ground cayenne pepper. Set over med-high heat and reduce to about half. Place the ribs on a broiling pan, meaty side down, brush with the reduced sauce and broil for four minutes. Turn them over, brush again and broil for five more minutes. Remove from heat and let rest. Crack open another beer and drink. 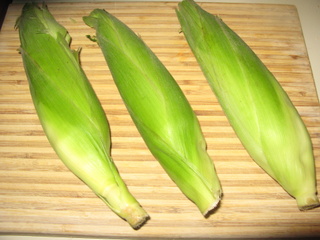 Along the way you have to consider a side dish. My favorite with any barbeque is corn on the cob. The following is Fritz’s recommendation from the Nero Wolfe novels. Many readers of the mystery genre are familiar with the fictional chef Fritz and his culinary pre-eminence and will blindly follow. The rest of you just have to trust me. About an hour before you are ready to eat turn the oven to 500F. Trim the corn husks of any strings but leave them wrapped. Place them directly on the racks and let them cook for forty minutes. Remove, dehusk, and enjoy. No butter. No spice. Just perfect, sweet corn.

If timed properly, it’s five o’clock. Spurrier is in pre-kickoff visor throwing mode. You haven’t watched College Gameday or napped while a Mississippi team played but you got in at least an hour of SEC Network speculation. You surely spent some time at work surfing the internet to bolster preconceived notions. You didn’t get that illicit 11:00 beer and the five or twelve conveniently packaged with it, but if you heeded my advice and skipped lunch those proscribed two are doing a game time like dance in your nutrient starved bloodstream.  Finally, you have fall off the bone ribs on a plate with corn on the cob. Sprinkle the ribs with the green bits of scallion and enjoy. 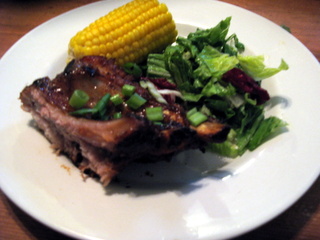 It’s not Saturday, barbeque, or Alabama football, but it is slow cooked meat and the SEC on TV. Don’t give me a song and dance about the truth. I told you upfront. You are complicit. Little lies have been harder to swallow.