With every season opener comes a case of nerves. Can we live up to expectations? Will the O-Line hold? Will an inexperienced DB corps spell the death of us?

Remember Tommy Bowden? Frank Beamer? They were supposed to be scary starts. This year is no different, except that now our opponent's coach sports a girl's name. While we may be only 13-17-2 vs. current Big 12 opponents we are currently the crème de la crème of the SEC. West Virginians took generations to manage a draw with Kentucky and those guys are projected by almost everyone of consequence to finish in the bottom three of our conference.

So let's relax and accept that which we cannot change. They will test our dbs with early long passes. They will use stunts/slants/loops with their light weight, speedy 3-3-5 defensive scheme.  I will pretend to knowledge of X's and O's from reading these electronic pages and say things like "Linebacker stunts are like strawberry flavored lube to screen passes and TE slants." It's all amble. This is about preamble.

Pre-game food requires advertisement. Your E-vite, tweet,  or poorly worded restraining order provides a reason for prospective revelers to attend your tailgate and nine times out of ten that reason is not recorded but I'm assuming that seven or eight times out of ten food is the draw.

So what do you call spiced lamb in a pita? In Greece it's called a gyro. In Turkey it's called a doner. In the vast Middle East it's called a shawarma. All of these are slightly different, but this is the melting pot. In America gyro is the name most recognized although shawarma just got a big ole Avengers plug from Iron Man Downey Jr. TM himself. Doner has a catering issue. I can sell a "Gyro Party Platter" or a "Shawarma Party Platter." "Doner," not so much.

The problem is I'm not even sure this qualifies as a gyro/shawarma/doner. But it's spiced lamb in a pita so...

Lamb Burgers in Pita with Harissa and Panzanilla: 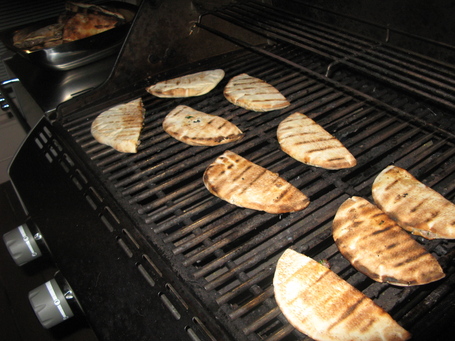 Take everything that isn't pita bread and mix together with your hands as thoroughly as you can. Add olive oil as needed to maintain the same degree of pliability you would expect from raw hamburger. When blended, put in a bowl and cover overnight.

Right before grilling, stuff each pita half with a thin layer, about a half inch at most, of meat mixture until you have a fully stuffed half moon.  Grill the whole lamb filled pita for roughly four minutes a side and let rest for a minute or two. Check and grill further if needed. The pita should have a bit of char on it.

Put chilis in a bowl and cover with boiling water. Let sit for twenty minutes until soft and pliable. Toast the caraway, coriander, and cumin in a pan until fragrant, about three or four minute and transfer to a mortar or spice grinder and grind.

Drain chilis and add to a food processor along with the mint, ground spices, lemon juice, salt, garlic, and a few glugs of olive oil. Puree and taste, add olive oil and salt and puree and taste and repeat as needed. Store in a plastic bag for two or three days.

In Less Media Res Panzanella, unless you are familiar with traditional Panzanella 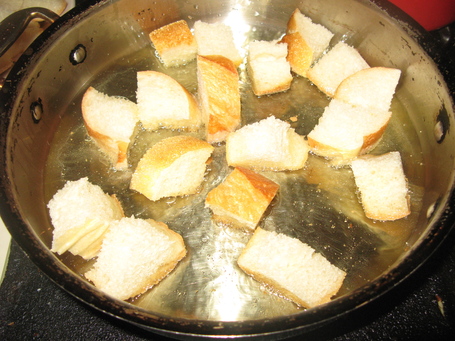 If you are tailgaiting you need to act while you still have a kitchen. Fry the bread in olive oil. If you have kids you may want to buy an extra baguette as "bread with the olive oil inside" ranks somewhere between corndogs and chicken fingers among adolescent palates. You can defend your cooked cubes as best you like, but there will be an audience.

Making your own salad dressing, if you never have, is a revelation. Start with a few glugs of olive oil and add red wine (or cider or white wine or whatever) vinegar and taste and add red wine vinegar and taste. As soon as you have too much vinegar, balance it with a bit of oil and some salt and pepper. Too much oil? Add Vinegar. Taste. Is there a right mix? No. It's what you like. That's the base for every vinaigrette you'll ever make. Add a bit at a time to your salad or vegetables and taste.

Bag the vinaigrette and bread in separate zip locs or whatever and put all the rest of the veg in a bowl and cover. At the tailgate, combine. Technically this is not Panzanella,but I've registered my compliant.

I hate to stand athwart the greats of Italian cooking, but my Panzanella is head and shoulders above. Also, you are never going to check.