RBR's countdown to the Alabama-West Virginia game continues with #25...

Four days before the 2013 Alabama-Ole Miss game, Wallace said these brash words fresh off a 44-23 stomping of Texas. The Rebels had ascended to a number 21 ranking with a 3-0 record and swelled heads. Sadly for Mr. Wallace and company, things were not as simple as he suggested. 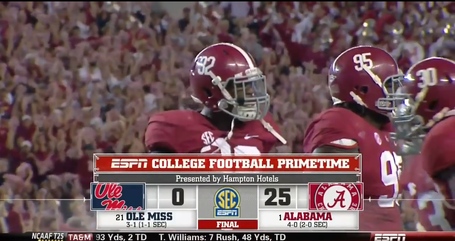 "We really wanted to stay in the game the whole time, especially after all the talking they did," linebacker C.J. Mosley said. "We really didn't pay attention to it, but we still heard it. For us to leave a zero on the board, it did a lot of talking for us on the field."

The Ole Miss offense came in averaging 38 points and 490 yards, but could only manage 46 yards on 25 rushes. Jeff Scott, who was averaging 110 yards a game and 9.4 per carry, was held to 28 yards on eight attempts. Bo Wallace was 17-of-30 passing for 159 yards, a fumble, and an interceptions to Alabama cornerback Eddie Jackson.

The coup de grâce was Mosley tackling Wallace in the end zone in the fourth quarter for a safety. On the very next play from scrimmage, Tide running back Kenyan Drake raced 50 yards for a touchdown: 25-0.

The score could have been worse but Nick Saban called off the dogs after Wallace was sacked by Denzel Devall on the very next play and he fumbled the ball right back to Bama at the 17 yard line. From that point on, Saban put in the back-up teams with a whole 5:15 remaining and ran out the clock.