Your daily dose of Crimson Tide related news and quotes.

Share All sharing options for: The Jumbo Package │08.07.14

This is a large individual I would not like to cross paths with.

Check out SEC Network graphic elements for all 14 schools; vote on your favorite | AL.com

The SEC Network unveiled "graphic elements" for all 14 member schools on Wednesday, items that will be used in conjunction with the network's launch Aug. 14.

Auburn currently has a healthy lead in the voting. Y'all know what to do.

"He had a bone spur removed yesterday from his foot," Carroll said at Wednesday's postpractice press conference. "It was a real nagging situation that we just didn't want him to try to tough it out. He could tough it out. He has in the past. But we wanted to try to fix him and get him right. "We think it's going to be a really quick recovery. He could make it back by the end of the camp. We'll have to wait and see how that works out. We're glad to fix him. The guy's been playing with a lot of pain. He just sucks it up and goes through it, but we figured out, hopefully, how to help him."

With almost any other team, question marks under center would spawn question marks everywhere else. With Alabama, not knowing who’s going to start at quarterback has little impact on the preseason predictions, because let’s face it, most people think they already do know who’s going to start at quarterback: the same guy as always. You know him well. He’s a 6-foot-3-ish "game manager" with a fratty haircut.

He "plays within the offense." Handoffs galore. Won’t fuck things up for the defense. The last two guys who occupied the position, AJ McCarron and Greg McElroy, both fit that mold to a tee. So did John Parker Wilson, who oversaw a 12-0 regular season as a senior while throwing just nine touchdowns; and Brodie Croyle, who helped orchestrate a top-10 finish in 2005; and Tyler Watts, who piloted the Crimson Tide to a 10-3 record in 2002. Coker, who attended the same Mobile high school as McCarron, is a little bigger than the standard model, checking in at 6-foot-5 and 230 pounds. Otherwise, though, he looks the part, Bama Bangs and all.

First off, for a site as popular as Grantland, that's a woefully unprofessionally written article.

Secondly, I actually find the beginning of the article to be quite racist. (TUN will have a field day with that one). He basically dismisses Sims as an option cause he's not white and doesn't have Bama bangs? In fact, he only mentions Blake Sims once....in the opening paragraph.

It gets a little better as your read on but I think GL can do better..

Florida had 17 players suffer season-ending injuries last season. Sixth-year senior receiver Andre Debose is one of them and like the rest of those who missed time, he is eager to return to the field.

17? Good baby jesus...Maybe we give the '13 Florida Gators a bit of a pass cause there's not a team out there that could have that many injuries and still be remotely competitive.

"It's a serious, serious issue," said the Rev. Joe Godfrey, former president of the Alabama Baptist Convention. "It seems for college kids the focus is on getting drunk, that's the goal of the drinking games. It's almost a rite of passage, like this is what college kids are expected to do."

Look, I'm not one to condone heavy drinking, it's just never been my thing but I don't think college kids will want to drink more jello shots just cause they are in the shape of the script A. Actually, this sounds like something older fans would partake in, cause college kids are too broke to pay extra money for jello shot molds.

--Still no sign of star DE A'Shawn Robinson, who wasn't spotted at the morning practice, either. Saban will update Robinson's status after Thursday's practice. His absence is not for disciplinary reasons. Without Robinson, Alabama's entire first-team defensive line from A-Day is not practicing. Jarran Reed and Brandon Ivory remain indefinitely suspended.

-- CB Eddie Jackson continues to look like someone who is more than four months removed from knee surgery. He runs smoothly and looked good shuffling side to side during one particular drill. He even took a bit of a pop from freshman safety Laurence "Hootie" Jones and wasn't any worse for the wear.

I'm hearing Robinson was absent due to attending a funeral for a relative. And reports are he has an MCL sprain, so he should be back on the field soon..However, tear or no tear, we need him, Reed and Ivory back on the field ASAP.

We also talked the other day about how quickly Jackson has returned from some type of ACL injury and we speculated that maybe the initial reports of a tear were incorrect..

Alabama football: Jackson on schedule in return from surgery - The Anniston Star: Sports

"Eddie’s a hard worker," Perry said. "He’s been in rehab two times a day. He made it his mission to be back for the season." Perry, who is coming off a shoulder injury that ended his 2013 season, said he spoke with Jackson about remaining focused in his rehab. Perry said Jackson has kept a positive attitude. "He’s very strong minded. He tries not to let the injury get to him," Perry said.

"So you’ll see him making different cuts and spin turns and different moves. I’ll be like, ‘Wow, the guy’s coming off an ACL.’ Just today, he made a great play on Amari Cooper. And the guy’s coming, what, four months off an ACL tear? That’s amazing."

I know Perry isn't a team doctor but he seems to think it was in fact a tear. Again, it could have been a partial tear but now we have some confirmation that it was a tear nonetheless. Good news is Eddie is focused and is doing all the right things to make it back for the season. HFTB

Finally, is it just me or does this map seem inaccurate? 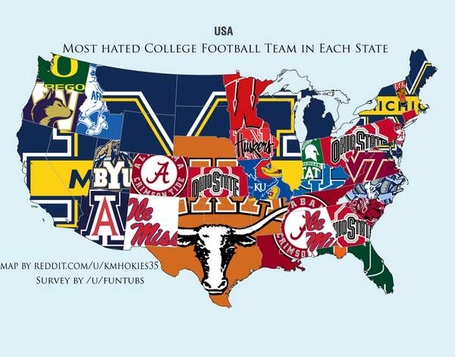