What the heck is all of this?

In last Thursday's Processing the Numbers, I clued you in to the 2014 Charting Project over at FootballStudyHall, and shared some results from the first four games of the season. Enough of you showed interest in this information that, provided you continue to show interest*, benevolent blog overlord Supreme Allied Manager bammer has permitted me to offer another weekly column that will focus solely on charting results. This will be purely quantitative stuff - for insights on the qualitative side of things, I'll happily direct you to glen55's excellent From the Couch series. Oh, and for those of you who said I was a jerk in last week's poll? 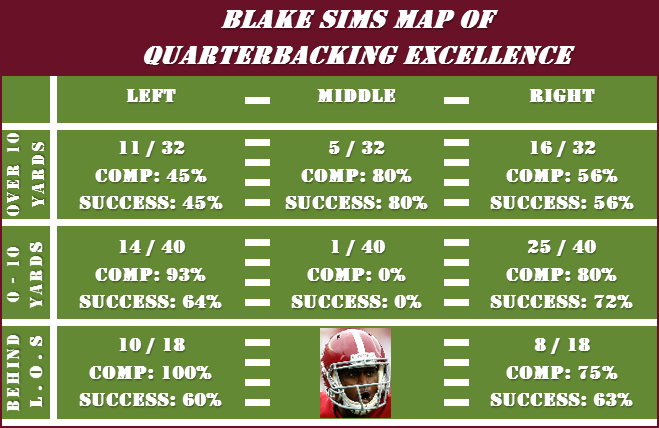 Clarification: Success rate here is the same it always is – how often you get 70% of required yardage on 1st down, 50% on 2nd down, and the whole enchilada on 3rd and 4thdowns.

As you can see, we tend to have a preference for the right side of the field, where we've achieved a lot of success. Aside from the short middle routes, the only area where things have been kinda dicey is the deep left. The main takeaway from this chart is that so far Blake Sims and Co. are Very Good at Football.

Clarification:The quarterback is not counted as a back here – "backs" refer to players aligned behind the line, but within the tackle box. So a tight end lined up behind a tackle would be considered a back (H-back), whereas he gets lumped in with the lineman (a "true" tight end) when along the line, and with the receivers when split out wide.

Not too many takeaways from this one at this point in the season. The most glaring thing to me is the vastly improved success rate on empty backfield and 5 wide receiver sets (not the same thing, by the way – we’ve run some 4 wide sets with a tight end and no backs, etc.), but given the low frequency of those alignments, that’s probably just small sample sizes at work (context is important in statistics!). In general we are more successful out of every alignment, which matches the trends talked about last week. One interesting note is that we’ve shifted to a lot of 2 back, 2 wide formations (often times a pistol look with a single set back and an H-back) which is reflected in the higher frequency for those two rows in the table. I didn’t chart last year’s games, but I would suspect based on the numbers that shift is because Nussmeier was a moron at the expense of single set back, 3 wide formations.

Now THIS is interesting. Again, we’ve played lower caliber opponents so far this year compared to last year’s data set, but look at that success rate on 2nd down! Like I said last week, anytime you’re successful 70% of the time on a football field you’re doing something right. The end result is we see a lot less third downs, and when we do, the yardage is lower, thus leading to an almost as good third down success rate. This is further reflected in the distance chart, where we’ve found ourselves in short-to-intermediate yardage a little more often than last year. One interesting result is we’re not as effective on intermediate distance so far this year — outside of small-sample wonkiness on 4th downs, that’s the only line in the table where that’s the case. I should note, in case it was not apparent, the big spikes in the "6-10 yards" category is due to a preponderance of 1st and 10s.

Clarification: Catch rate is simply the percentage of targets that were caught. Targets here do not take into account why the ball wasn’t caught. If you drop the ball, it was a target. If the ball was overthrown, it was a target. The only time there aren’t targets on a play is when the ball is thrown away, or if it was tipped somewhere along the way (usually at the line) in such a manner that determining the intent is difficult.

Just the top 5 here. I’d say maybe we should spread the ball around a bit, but if Cooper keeps finding himself that wide open there’s no real reason to worry about it. Supposedly the best cover corner in college football couldn’t deal with him, so I’m not sure what anybody’s going to do about it. Maybe Auburn can stick one of their roving pass interference penalties on him, grease the right palms...

Big Caveat: The chart above and all of the defensive charts, at least for now, do not take into account garbage time. I suspect if/when I account for that things will improve somewhat, as we wont be pulling in data from our second and third string guys.

I wanted to lead the defensive section off with this table so that we could talk about the no-huddle. This does not account for pace at all, and teams that don’t run the spread but are running the two minute drill get lumped in here as well, but as you can see we were less successful against the no-huddle in 2013 than otherwise, and that trend has been reversed so far this year. This breakdown will be more interesting later in the year after we go through Ole Miss, aTm, and Auburn. So, there is some truth that we were less effective against the no-huddle last year (and presumably in years past) than against "huddled" plays, but it is not as significant as some people would lead you to believe. The best part is I made this point with cold, hard numbers, instead of a Texas hat and a smile. If we can continue these trends against the stronger HUNH teams noted above, the much-discussed shift to a quicker, lighter front seven would seem to have been successful. Heyday, indeed.

So far we’ve been a little susceptible to play-action passing, but that’s a grand total of 20 plays on the year. Probably going to shake out by the end the season.

Kind of mixed results here. The success rate on left end runs is misleading – that’s over a whopping 4 plays on the year. Not really sure what to make of the slight bump in success rate on right tackle runs either – decent sample to work from, but that’s just what it is so far. Good news is we’ve been stouter against inside runs by about the same margin.

The down frequency table is likely heavily influenced by our opponents thusfar, two of whom were very, very pass happy (West Virginia and Southern Miss) – I suspect by the end of the year it will look pretty similar to last year’s results. The success rates again are kind of odd, with a big jump to the negative on second down. Again, the good news is so far we’re not getting gashed on 3rd down runs this year, with a 22% drop in success rate so far.

No takeaways from the frequency chart whatsoever, it’s very similar. We’ve been slightly more susceptible to first down throws than last year, but overall we’ve defended well, especially on third downs. That seems to be a theme on both sides of the ball so far this year – improvement on 2013 and just straight nasty on third downs.

We’ve gotten gashed a bit on the short to intermediate stuff, likely as a result of having people like Trey DePriest and Reuben Foster attempt pass coverage. When you get into safety and cornerback territory, however, we’re much improved over last season. It’s early in the season of course, but for all the flak the secondary’s gotten so far this year, they’ve not given up much deep.

Like with the passing and rushing charts, not a lot of takeaways on the frequency side of things – pretty much identical to last year. Really not much to talk about on 1st or 2nd down either, although we’ve be a little weaker on second downs for whatever reason. In keeping with the theme, however, straight up dirty on third downs. I wish I had some national data to put that in context for you, but 24% seems very, very low.

Clarification: As you might have surmised from the chart, "disruptive plays" is a sum of sacks, passes defensed, interceptions, and forced fumbles. It’s similar to the concept of "havoc plays", except it includes forced fumbles, differentiates between defensed passes and interceptions, and doesn’t include tackles for loss. Mainly because I have been tracking the things it includes and haven’t been tracking those it doesn’t. Think of these as things that got you multiple helmet stickers when you were playing peewee.

There’s actually a slew of guys with 2, but so far there’s not much to say here. This will be more interesting later in the year – we saw some more exotic pressures in the Florida game, which I suspect will be more common moving forward. Landon Collins is a beast.

So, did I miss anything? Anything else you think should be noted? Let me know in the comments!