It's slightly less ugly than the defense. So ... Roll Tide?

On its very first possession of the 2014 season, Florida Atlantic drove 75 yards in 11 plays, and scored a touchdown, tying its game against Nebraska at 7 a side.

That was ... more or less the high point of the afternoon for FAU. The Owl offense didn't score again for the remainder of the game - their deepest penetration of the game after was to the Nebraska 15, which happened in the fourth quarter, well after the issue was in hand - and ultimately finished with 200 yards of offense, for a paltry 3.3 yards per play average, in a 55-7 loss. For good measure, their own D gave up an astounding 782 yards of total offense, over 8 yards per play. It was ugly in pretty much every imaginable way, is what I'm saying.

Well. The good news for FAU's offense is, at least they don't have to travel to face the No. 2 team in the country whose defense is testy after a disappointing showing in the first week or anything.

So, FAU's coaching saga - Carl Pelini's ouster, in which he resigned, then he didn't, then the school fired him anyway - is relatively well documented at this point. In its wake, the university cast its lot with Charlie Partridge, a former assistant under Bret Bielema at Wisconsin and Arkansas. In a rather unusual development, FAU managed to keep interim head coach Brian Wright, who kept his offensive coordinator job under the new regime ("unusual" because new hires typically clean house, particularly when the guy in question is basically taking the runner-up role to the head coach).

For whatever it's worth*, FAU closed 2013 on something of a roll - the Owls won their final 4 games under Wright's interim tutelage, and the offense was a big part of that. On that four-game streak, the Owls scored 34, 41, 55 and 21 points, in comfortable wins. It was a balanced offense, too, averaging 185 yards rushing and 199 passing.

* The list of opponents in that streak: Tulane, Southern Miss, New Mexico State and Florida International. 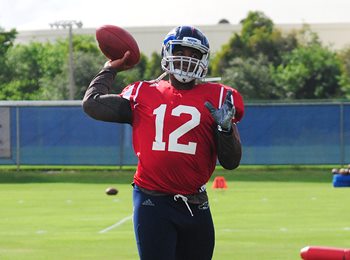 The quarterback's the thing

He's also a Communication major, which makes me want to root for him. But not this week.

As the game's final score would suggest, Johnson's first week of 2014 ... was not good. He did throw the Owls' only touchdown, but was limited to 19 rushing yards on 4 carries, and 61 passing yards on 6-of-12 completions. He exited the game in the third quarter with an injury to his left (non-throwing) shoulder, which he says will not keep him out of Saturday's game.

If he couldn't play, FAU will go with redshirt sophomore Greg Hankerson, with whom Johnson split time for most of 2013. On a completely random note that likely won't matter Saturday, FAU does have true freshman Jason Driskel - brother of Jeff (yes, that Jeff) - on its bench, though the coaching staff has basically committed itself to not using him unless Congress passes a law requiring them to do so (and it's Florida, so ...).

Johnson aside, Partridge's pedigree suggests that what the Owls really want to do is run the ball. FAU returned its leading rusher in Johnson, as well as running back Jay Warren (4.8 ypc in 2013), and the bulk of its 2013 offensive line. Connelly described the Owls as "thin" in his season preview, which is hilarious since it averaged "just" 285 pounds last season.

None of that helped last Saturday. FAU netted 105 yards of rushing offense on 30 carries in Lincoln, with Warren leading the way with 77 yards on 14 carries.

The bottom line for Saturday is this: to give itself a chance, FAU needs Johnson to play the greatest game in the history of the program, hope Alabama's ongoing struggles with dual threat quarterbacks continue and ... well, hope for something miraculous out of its defense (that particular topic belongs to someone else, thank gawd). Anything less and this is a JV game for Bama in the second half.

As always, hope for the best.