It's time to stop being polite and start being real.

Share All sharing options for: RBR Tailgating: Looking Past FAU

In Communist Czechoslovakia, a greengrocer hangs a sign on his wall as required. Ostensibly, it says "Workers of the world, unite!" In Vaclav Havel's hands that image, combined with a few heroin-inspired lyrics by Lou Reed, sowed the seeds from which the Velvet Revolution blossomed and a vile regime was relegated to the dustbin of history.

In his essay, "The Power of the Powerless", Havel delves into the true meaning of the greengrocer's sign. Despite the printed words, the sign says nothing about workers uniting. It says "I submit." It is a symbol of his acquiescence to the party and his humiliating willingness to aid in its propaganda campaign.  Over the course of the next seventy or so pages Havel convincingly makes the case that no matter how powerful or entrenched an idea is, if that idea is built on lies, it becomes a mockery of itself when exposed to the truth.  To be free, he wrote, one must "live within the truth." One must not accept lies, be they fawning pledges of adoration towards a soul-crushing totalitarian government or nonsensical consensuses among football fans over clichéd sentiments about "not looking past an opponent."

Of course I can look past an opponent, especially one that gave up 785 yards of real estate to a Nebraska team not coached by Tom Osborne. If there is one advantage (there are many) to being a fan of a team whose every active player is a member of a first ranked recruiting class it's that when confronted with a decidedly lesser opponent that opponent is easily identifiable and decidedly lesser. So join me in living within the truth and looking past Florida Atlantic University, in looking past Saturday entirely. Let's talk about Sunday brunch.* 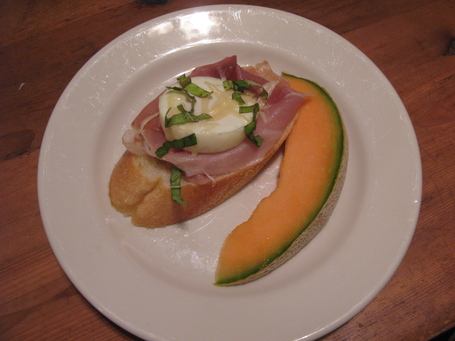 Poached Egg with Prosciutto and Parmesan

I left out measurements in the above as your needs will vary depending on the crowd, but basically you need one egg, one slice of bread and prosciutto, and a pinch of sliced basil and grated parmesan per person.

Poaching eggs can be remarkably frustrating if you don't have the right equipment. To paraphrase P.J. O'Rourke, poaching eggs is sort of an Auburn joke about hard boiling where you remove the shell before cooking. And that's what you want to do. Drop the eggs into boiling water and let cook for 3 ½ minutes.

If you want to cook more than one egg at a time you pretty much need to invest in a pan specially made to keep each egg in its own compartment. If you are going to go ahead without such a thing and still want to serve multiple people at once there are a few tricks to help you serve several hot plates at the same time.

Get the water boiling and then stir rapidly to create a whirlpool. Crack a single egg into the center of your now furious vortex. The water's motion should keep the egg as close to a ball as you can expect. After 3 ½ minutes, remove with a spoon or ladle and immediately shock it in a bowl of ice water to stop the cooking process and then place on a paper towel covered plate. Repeat until you have an egg for each person. The water will become cloudy after a few rounds. Pour it out, start with fresh water, and press on. When you have enough eggs for your guests, bring another pan of water to a boil and place all the eggs in together for 30 seconds or so to reheat.

While your eggs are cooking, toast thick slices of olive oil brushed bread at 400 degrees until they are firm to the touch but not crusty - 2 to 3 minutes. Remove from the oven and with one slice of prosciutto per piece of bread, make a basket like in the photo below. 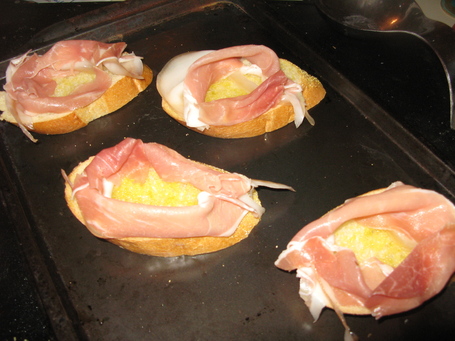 Put an egg in each basket, sprinkle with Parmesan, and back in the oven for 30 seconds to 1 minute. You want the Parmesan to melt but not at the cost of the overarching goal: keeping the yolk running - which is going to be much harder with the cook/shock/reheat method than the quick cash fix specialty pan, but making things easier is the highest and best use of cash so no surprises there.

A few ribbons, or a chiffonade if we are being proper, of basil finishes things off.

A second brunch option for those that may have overindulged while celebrating our foregone conclusion of a victory over the champion from CUSA (champion used in this sense as "One who fights for a cause." rather than its more common definition denoting "One who has surpassed all rivals in a given competition." because Rice, UTSA, North Texas, Tulane, Marshall, East Carolina, and Middle Tennessee exist and had better conference records than our non overlookable opponents who came within no hair's breadth of winning their conference title) comes from the Basque country. That more often than not means it's spicy. 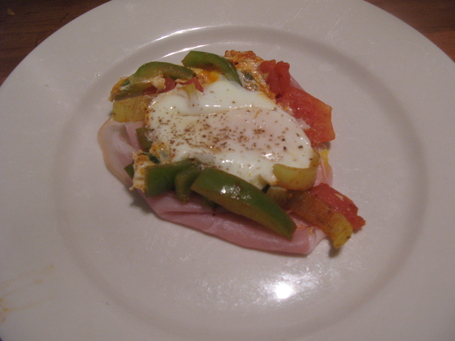 Drizzle a few glugs of olive oil into a skillet over med high heat and add the peppers, garlic, and tomatoes. Feel free to use whatever peppers make you happy. My neighbor's garden exploded last week so as a beneficiary of her largesse I used a large green bell pepper, two Anaheim peppers, and two jalapenos. When the tomatoes start to sweat add the wine, paprika, and cayenne and simmer.

Once the wine has evaporated salt and pepper to taste and then crack an egg in the north of the pan and repeat in the other three cardinal directions. Ideally they will cook evenly atop the peppers and tomatoes but you may need to cover for a minute to insure that the yolks keep pace with the whites.

To serve, make prosciutto baskets as above but this time directly on the serving plates. Since this is spicier and thus more manly than the poached egg dish feel free to refer to these as prosciutto ramparts rather than baskets without worrying about diverging too far from the original recipe - a great deal of cooking is improvisation.

Put one egg with as much pepper/tomato mix as possible in each rampart, add a grind or two of black pepper, and serve. I've covered this ground before should you care to explore.

But what to drink with brunch? I like sparkling wine. Champagne is preferable, but expensive. Proseccos and Cavas both make for enjoyable and affordable methadones. If you plan on adding fruit to your bubbly, most anything can be made palatable. We took advantage of some late season peaches to make some pretty tasty Bellinis. Just peel and pulverize in a food mill or processor (if you are wondering if you should remove the pit, leave now). It may need a bit of simple syrup (50/50 sugar to boiling water in a suspension) depending on ripeness. Pulpy is fine. Just add two spoonfuls per glass.

That may be the best part about brunch: ritualized and thus guilt free morning drinking. So raise a glass to Florida Atlantic University. They were who we thought they were. 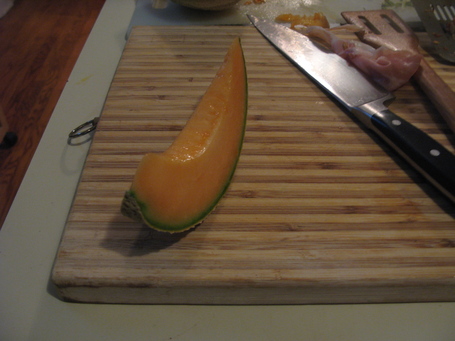 * Considering that the Alabama vs. FAU game is slated for an 11:00 am kickoff it is not out of the question that the "Sunday" brunch could in fact be prepared prior to the game on Saturday and constitute some sort of game time meal but this option should in no way be construed as an admission that RBR Tailgating is not looking far, far past this "contest."