A look at the AP, Coaches and Massey Composite after Week 8 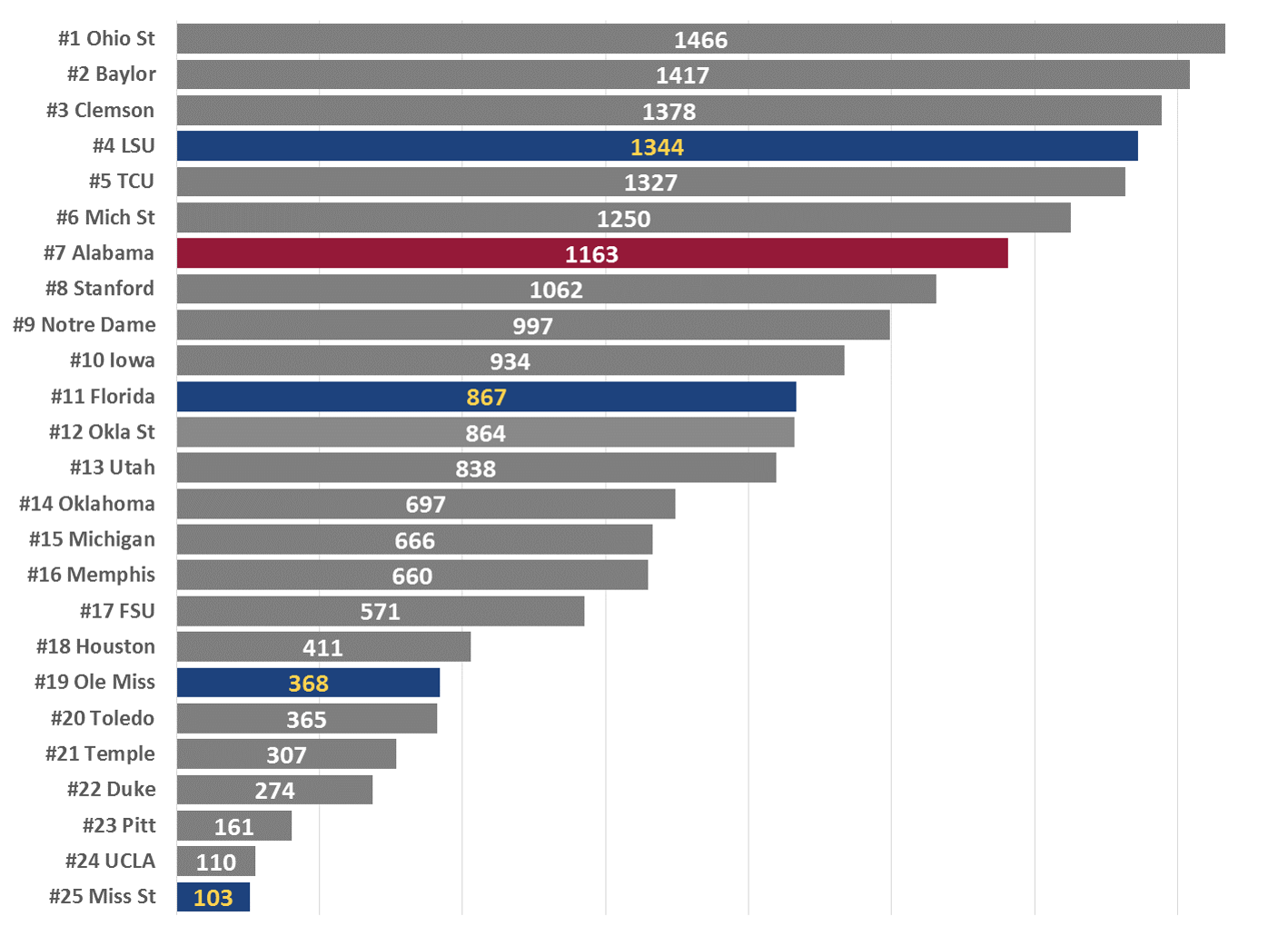 Alabama most likely needs some help to get into the College Football Playoffs, and unranked USC opened the first door by taking down last week's #3 team. Utah fell from #3 to #13 and (probably) out of playoff contention.

Now there are three teams between #7 Alabama and the AP Top 4. We play one of them (LSU) and two others are guaranteed a loss (TCU or Baylor; Ohio State or Michigan State).

Baylor is still #2 after beating Iowa State but lost their starting quarterback Seth Russell. It'll be up to freshman Jarrett Stidham to lead the Bears to the College Football Playoffs.

Clemson handed Miami their worst loss ever and jumped six spots to #3, and Georgia Tech upset previous #9 FSU to drop the Seminoles to #17 and out of the playoff picture.

Alabama in the AP 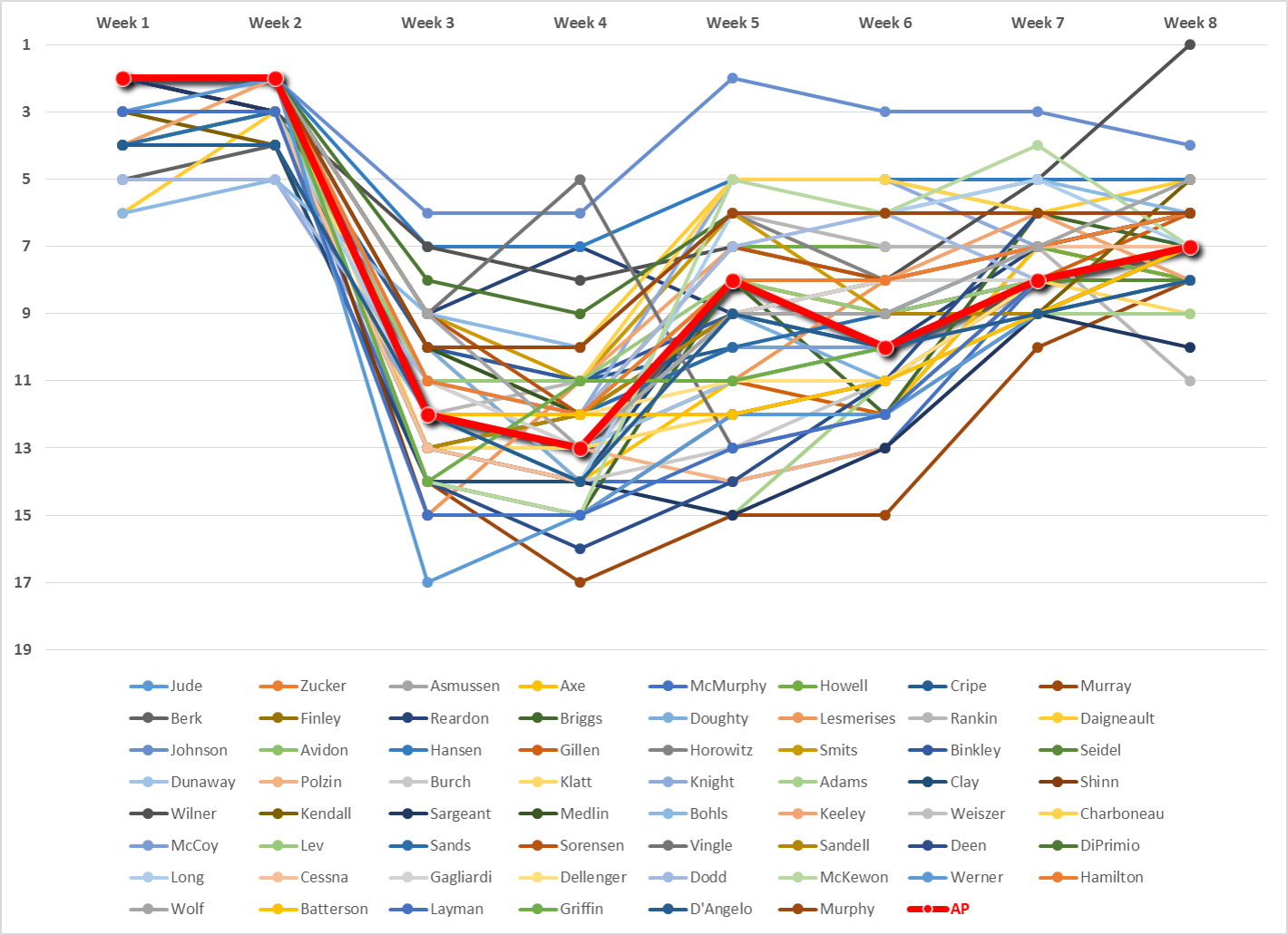 A five-point home win over an unranked opponent doesn't usually command much movement in the polls, and 15 voters left Alabama where they had them last week.

Thirten voters dropped Alabama this week including Duane Rankin, who moved Bama from 7 to 11. Sam McKewon, who had the Tide at #4 last week, now lists Bama at #7 and Ed Johnson, who gave Bama its highest ranking in the AP last week, moved the Tide from #3 to #4.

Thirty-three voters moved the Tide up, mostly due to Utah's loss. But Josh Kendall moved Bama from #9 to #5, and Jon Wilner bumped us from #5 to #1!

Bama's Opponents in the AP

I noted two weeks ago that our schedule, ranked toughest in the country in the preseason, was taking hits as teams were dropping out of the Top 25. Add Texas A&M to that list. The Aggies dropped out after managing just 3 points against Ole Miss. Now two of Alabama's Top 10 road wins are against teams that are no longer ranked.

A&M is currently sitting at #26 in the AP with a chance to make a run into the Top 25. They are home three weeks in a row as South Carolina, Auburn and FCS Western Carolina make the trip to College Station, then the Ags travel to Vanderbilt on November 21 before facing LSU in the season finale. That should be good for a 9-3 season and a quality win for the Tide.

Mississippi State clawed back into the poll at #25 after beating Kentucky. The Bulldogs have a week off before a Thursday night tilt at flailing Mizzou.

Georgia checks in at #30 this week after a bye. The Bulldogs get Florida this week in The World's Largest Tank Top and Jorts Party then host Kentucky, play at Auburn and host Georgia Southern before Good Ol' Fashioned Hate against Tech.

Wisconsin is #31 after winning three in a row. The Badgers (6-2) should finish the regular season 10-2 and on a seven-game win streak. They host Rutgers this week then go to Maryland on November 7. They're off November 14 then host Northwestern and travel to Minnesota for the finale. 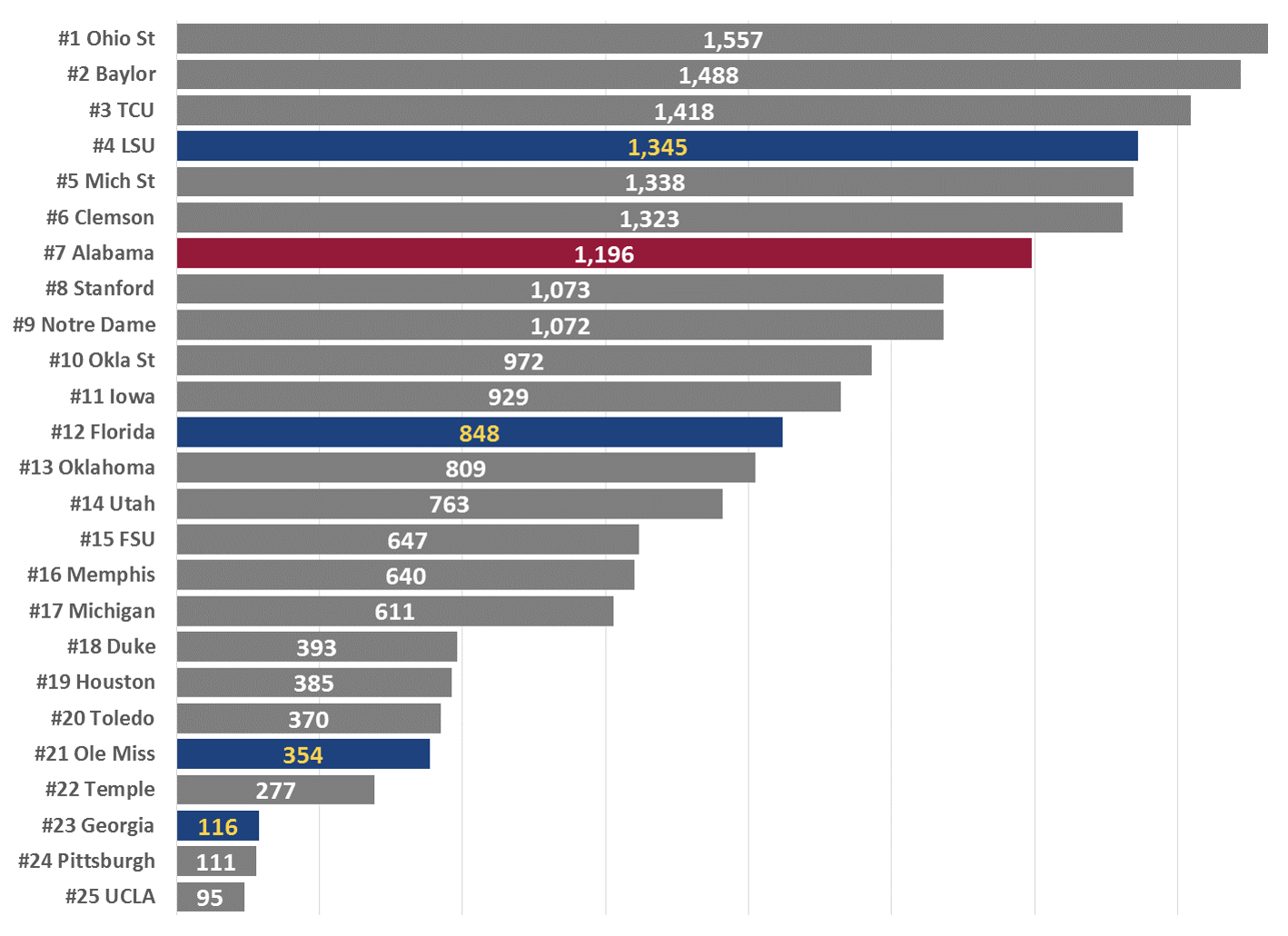 The Massey composite includes rankings from 95 sources this week. Combining them all gives this Top 5:

SEC in the Massey Rankings 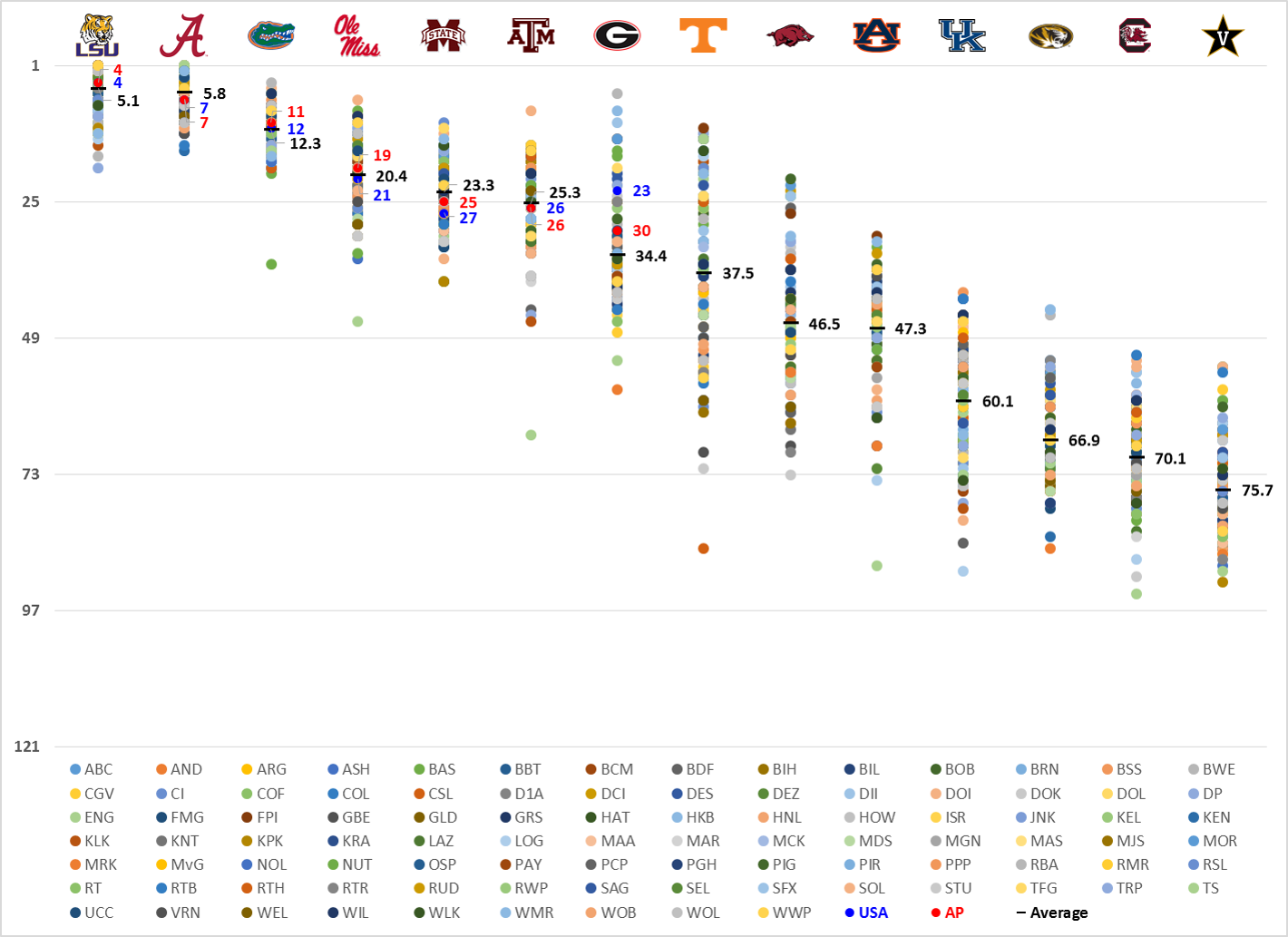 LSU is the highest-ranked team in the SEC followed closely by Alabama. Vanderbilt is still last despite beating Missouri last week.

Nine of the 95 sources list Alabama as the #1 team. The Kellner Ratings have Alabama at #16.