As we enter the home stretch, Alabama needs help from Lady Luck to get into the playoffs.

At least a dozen teams are still in the mix for a playoff spot and with Bama's schedule strength--regarded as the toughest in the country in the preseason--taking hits week by week and so many undefeated Power 5 teams, our résumé probably won't be enough to get us in if it doesn't include "SEC Champions".

Utah's loss to USC eliminated one threat, and head-to-head matchups will knock some contenders out, but here are the teams in the mix and how the rest of their season might go.

A lot of Bama fans feel like just winning out will punch a ticket to the final four, but that's no guarantee. There are three conference foes that could crash the party.

Let's start with the home team.

Nine of Alabama's opponents have spent at least one week in the AP Top 25, but only three are there today: #4 LSU, #19 Ole Miss and #25 Mississippi State. So the Tide is 0-1 against currently-ranked opponents. And that one loss is to a team that got blown out by Florida and lost to a Group of 5 team.

But Bama is the only team with more than two wins against the Sagarin Top 30. The Tide is 4-1 against those teams who are just outside the AP Top 25 and are poised to make a late-season run:

For the purposes of this post, I'll assume Alabama wins out because nothing else matters if they don't.

Alabama's biggest test is its next. #4 LSU comes to Tuscaloosa on November 7. A win there (59.5% chance according to FPI) would be enough to bump Bama a couple of spots, but undefeated P5 champs would still get the CFP nod ahead of the Tide.

And lest Bama fans look too far ahead, the Tide only has a 0.5% better chance of beating Mississippi State than LSU.

LSU (7-0) is the most obvious roadblock Bama faces. Quarterback Brandon Harris has thrown 9 touchdowns and 0 interceptions on the season and presents just enough of a downfield threat to open up some space for Heisman candidate Leonard Fournette.

The Tigers will probably be the #1 seed if they win out, but ESPN's FPI ranks their remaining schedule the toughest in football and projects losses to Bama and Ole Miss.

Former Bama OC Jim McElwain is off to an incredible start in the Swamp. The Gators are 6-1 with a blowout win over Ole Miss and a 7-point loss at LSU. The SEC East is dreadful, but the Gators can get into the playoffs by winning out.

Ole Miss isn't in a position to take a playoff spot, but they can certainly keep the Tide from getting one.

Hugh Freeze and Company still control their own destiny in the SEC title race. Win out, and they're the SEC champs. And while the AP Poll might put Bama ahead of Ole Miss, I have a hard time believing that the Selection Committee, which puts a premium on conference championships, would select Bama, who lost to Ole Miss, over SEC Champion Ole Miss. If Ole Miss wins the conference, the SEC might not get a team in the playoff at all.

The Rebels' remaining schedule strength is ranked 4th by FPI, which doesn't project them as underdogs in any remaining regular season games.

The Big Ten still has three undefeated teams: Ohio State, Michigan State and Iowa. If any one of them finishes the season undefeated, they'll get a spot in the playoffs.

Ohio State finally settled on J.T. Barrett as their QB and handed Rutgers a 42-point loss. FPI doesn't foresee any great challenges in their upcoming schedule, and the Buckeyes have the best chance of winning out among all of the teams contending for a playoff spot.

The Spartans have sputtered through this season, struggling against inferior opponents. We thought that Week 2 win over Oregon was a big deal until Utah went duck hunting. Michigan State only beat Purdue by 3 and Rutgers by 7, and you know how that Michigan game ended. They have a chance to earn their ranking on November 21.

Iowa's road to the Big Ten Championship is smooth as glass: Maryland, at Indiana, Minnesota, Purdue and at Nebraska. They beat Wisconsin 10-6, and being the undefeated champ with a win over either Ohio State or Michigan State, though not likely, would get them into the final four.

There are three undefeated teams in the Big 12, but the round-robin should straighten that situation out.

Baylor is the Big 12 favorite, but their remaining schedule is the seventh-toughest in football and they recently lost their starting quarterback. Can a freshman lead them through this gauntlet?

TCU simply hasn't looked the part of a Top 5 team this season. They started with a 6-point win over Minnesota, only beat Texas Tech by 3 and only beat Kansas State by 7--the same K-State team that lost to Oklahoma 55-0. Voters thought their dismantling of Texas was a sign that the Frogs were for real, but I'm skeptical. So is ESPN's FPI.

**TCU's Win Out Pct was calculated after their Week 9 win over West Virginia.

The Pokes are undefeated, sure, and that's tough. But their best win was probably in overtime against unranked West Virginia or 30-27 over Texas. The other teams they've beaten are Central Michigan, FCS Central Arkansas, Texas-San Antonio, K-State, and Kansas.

Their remaining schedule, however, is rated sixth-toughest and they have just a 1.7% chance of winning out. The only thing in the Cowboys' favor is that they host their three ranked opponents.

There's only one candidate who can fill this role:

Dabo's Tigers jumped three spots in the latest AP Poll after throttling Miami, but their rain-soaked 2-point win over Notre Dame is their only Top 25 win. They can add to that by beating Florida State.

Their most likely ACC Championship Game opponent is North Carolina. The Heels are #27 in the AP but look to jump into the Top 25 after beating Pitt last night. They face #22 Duke next week and will probably be a Top 25 team on December 5.

A loss to unranked USC probably knocked #13 Utah out of the playoff mix, but there's another playoff contender rising in the west...

Stanford's Week 1 16-6 loss to Northwestern was ugly, but the Cardinal could be Pac-12 champs and on a 12-game win streak when the Selection Committee releases its final poll.

A win over Notre Dame in the final week of the regular season followed by a win in the Pac-12 Championship Game over an 11-1 Top-10 Utah would probably bump Stanford over Bama if the Tide is idle on Championship Saturday.

Notre Dame's only loss is an easily forgivable 24-22 loss at now-#3 Clemson in a Biblical downpour, but I don't know if their remaining games--including a trip to #8 Stanford--are enough to bump the Irish into the Top 4.

Look, there would have to be complete and utter chaos for a Group of 5 team to sniff the playoffs, but it's a possibility.

The Tigers are 7-0 with a win over Ole Miss--who could still win the SEC--and they still have two undefeated Top-25 teams on their schedule. If they finish undefeated with wins over Ole Miss and the team that beat Notre Dame (Temple), they would have a legitimate case to make the playoffs.

They host Notre Dame this weekend. A win would propel them into a very interesting discussion.

I'm including Houston here because, like Memphis and Temple, they're undefeated in the AAC. But unlike the others, Houston doesn't have a chance to score a big win against a Top-25 Power 5 team.

They beat Louisville (who hasn't?) and get Vandy this week. Maybe if Temple beats Notre Dame and the Cougars beat Memphis and Temple in the AAC Championship game to score transitive wins over Ole Miss, Bama and Notre Dame? 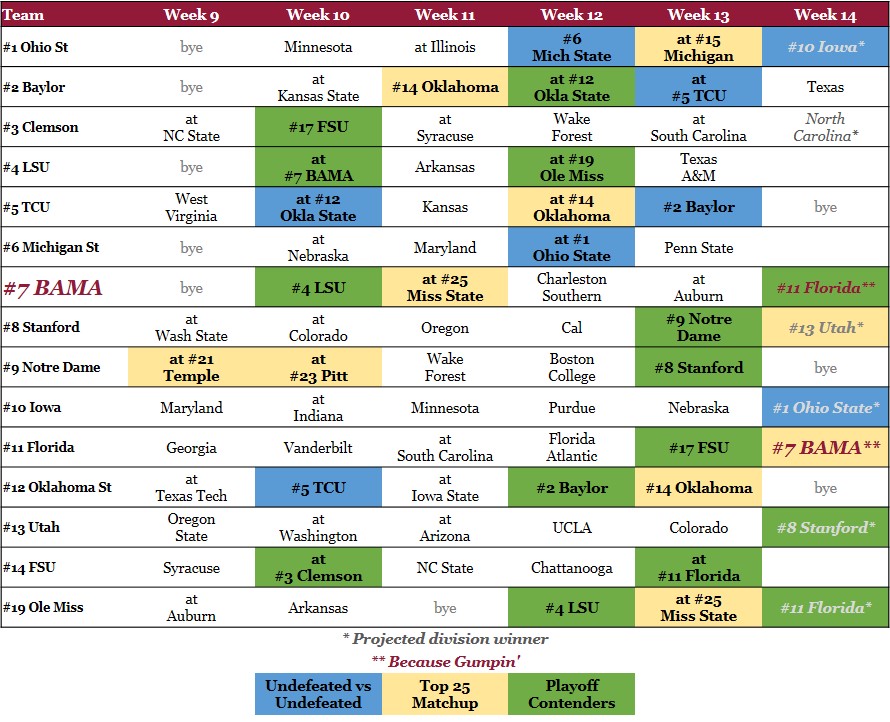 If things play out the way ESPN's FPI thinks they will, here's how the final CFP rankings* will look:

*I think there's a very good possibility that Alabama is in the AP and Coaches Top 4 but not in the College Football Playoff Selection Committee Top 4.