We don't know either, Coach.

Kentucky managed to survive perhaps their last potential stumbling block of the year — at least, until the Tide beats them in the SEC tourney — outlasting LSU 71-69 in Baton Rouge. Just in case that result led anyone to question the dominant nature of this team, they proceeded to vaporize South Carolina by 34 in Lexington. Basically they need to beat a dangerous Razorbacks squad at the end of the month to stay undefeated at this point, and I’m certainly not going to be picking against them in that one.

Speaking of Arkansas, they’ve skipped ahead of Ole Miss this week into the #2 slot, after tripping up the Rebels in Oxford by just a point last Saturday[1]. They’re followed by LSU, who rebounded from the tough loss to Kentucky by handling the Creamsicles on the road, but they have a tough slate this week which we’ll discuss in great detail later on. One of their opponents this week is Florida, who has the notable distinction of being the country’s highest-ranked team with a losing record. They’ve lost 4 in a row and 7 of their last 9, but they just will not drop out of the PYTH top-40. They are ahead of Georgia by the narrowest of margins — just 0.0002 in the PYTH ratings — who celebrated beating a red-hot Texas A&M squad on the road by crapping the bed at home against API[2]. Vanderbilt and the aforementioned Aggies round out the SEC contingent in the PYTH top-50.

1 | Is it just me, or has there been just a ton of these this season in the SEC? Maybe I’ll look at that next week.

2 | In other words, they were Georgia again this week.

Alabama’s disappointing home loss to the Commodores knocked them firmly into the bottom half of the conference and out of the PYTH top-50, and with that loss went any hope of an NCAA bid. The Tide will have to win the SEC tourney to get in, and that is simply not going to happen[3]. Right behind the Tide are the Gamecocks, whose lone accomplishment this season seems to be ruining the Tide’s early-season mojo. The Creamsicles, API, CLANGA, and poor Missouri are all outside the PYTH top-100. 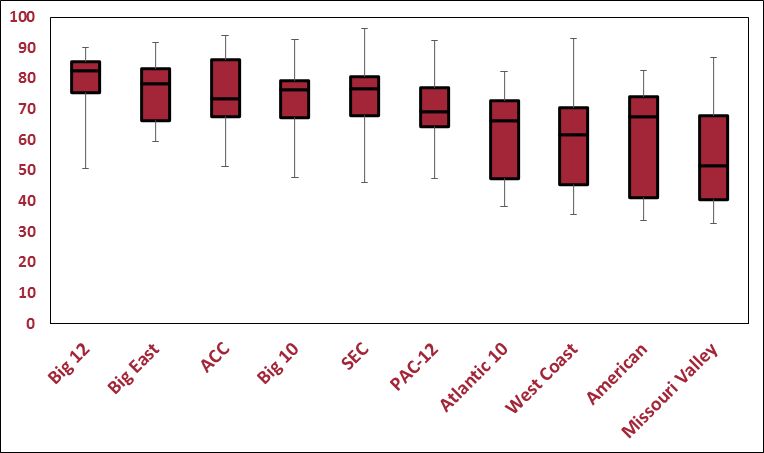 The table looks a bit different this week, and that’s because I finally got around to tinkering with the ratings a bit. The ACC’s position in these rankings has been a bit controversial[4], as the distribution of strength in that conference this season is tailor-made to break the median approach I was attempting to use, and as a result they’ve ranked behind the SEC and Big 10 all year. I wanted to adjust the ratings in such a manner as to reward conferences with several strong teams, but not overly penalize them for having a couple of horrible teams at the bottom (which a simple average would do).

4 | Like, all five nerds who read this column were debating it. Shit got real, man.

To accomplish this, I came up with a weighted average based on quartiles, which I was conveniently calculating anyway for the boxplots. An approach based on percentage of teams was required due to the different sizes of the conferences. I multiplied the combined ratings for the top quartile of each conference by 1.25, divided the ratings from the bottom quartile by the same factor, kept the middle 50% unadjusted, and then took the average of all that to come up with the new rating. The 1.25 is completely arbitrary[5], but it did happen to produce numbers that were similarly scaled to the median ratings I’d been using, for what that’s worth. For the strongest conferences it did not produce a tremendously different result from a simple average, but it did once you got farther down the line, and I decided that provided value. At any rate, I think I am good with these for now. The median ratings are provided in the rightmost column for reference, and I also shifted the "Teams in the Top-50" column from being PYTH-based to using the combined PYTH and BPI rating.

5 | I mean, the whole system is, to be honest. But it’s fun to talk about, and thus worthwhile.

As far as the results are concerned, the ACC is now ranked third behind the Big East and Big 12, which seems fair to me. There is no question that the Big 12 is the best conference in basketball this year, as they really only have one truly bad team in the league in Texas Tech. The next four conferences are separated by about a rating point apiece, which means they are all pretty closely matched — a result supported by the boxplots. I wish I had looked at this before Saturday, as the ACC may have been #2 overall before Louisville and North Carolina lost to significantly weaker conference foes. The PAC-12 continues to lag behind the other majors, as that league is Arizona, Utah, and not much else.

As a result of the shift in methodology the A10 is now king of the mid-majors, well behind the PAC-12 but just ahead of the WCC’s best impression of the PAC-12 — Gonzaga, BYU, and not much else. The American and Missouri Valley round out the top-10.

Another crappy week matchups-wise, so only two previews this time around, and they both involve LSU.

Texas A&M was the hottest team in the conference, but they’ve now dropped two of their last four. They get the Tigers at home, but LSU has a significant advantage both in the advanced metrics and in overall talent. LSU continues to play at one of the country’s fastest paces, and while that hasn’t resulted in tremendous offensive efficiency it hasn’t hurt the defense one bit. They also have the best player on the floor in possible SEC Player of the Year Jordan Mickey, who puts up fun stat lines like 20 points, 11 boards, and 7 blocks (which he tallied Saturday against the Creamsicles). The magic box has this one at about 59% for the Aggies, but I’m taking the Tigers.

Florida’s going to look back on this season and wonder what might have been, as they’ve now lost 5 games by 4 points or less[6]. They continue to play tough basketball in losing efforts, but are now without leading scorer Michael Frazier II[7]. Unlike the Tide, however, the Gators will probably have the same coach next season, and Billy Donovan would have to commit treason or something to lose his job at this point. Back to the matter at hand: this was the "best of the rest" among non-Alabama games this week, but the Gators' chances of winning in Baton Rouge were low, and that was before they lost Frazier.