It's up to Arkansas now.

In a surprising turn of events, Kentucky won both of their games this week handily, delighting Alabama fans everywhere by dispatching that orange team by 18 and detonating Alabama Poly by 35[1]. They’ll be 28-0 when they welcome Arkansas to Rupp Arena on Saturday, but we’ll get to that in a bit.

Speaking of Arkansas, they held steady at #2, setting up quite the slugfest for later this week. The Razorbacks have rattled off six wins in a row since their tight loss to Florida at the end of January, and have an opportunity to really shake the national landscape if they can pull off the impossible in Lexington. These two have been your most consistent teams throughout the season[2], in what has been a fun year in the SEC.

2 | Except for Arky’s odd loss to the Creamsicles in Knoxville, which seems bizarre in hindsight.

Rounding out the top-5 are LSU, Ole Miss, and Florida, who continues to rate out among the 40 best teams in the country despite a thoroughly pedestrian record, chiefly due to a now top-10 defense. LSU and Ole Miss will meet in Saturday’s other marquee game, but we’ll get that that in a bit as well. Right behind Florida are current Tide Enemy #1 Georgia and Texas A&M, who’ve rebounded nicely from a puzzling home loss to the Bulldogs to notch three straight wins heading into their showdown with the Razorbacks on Tuesday.

Vanderbilt again rounds out the SEC’s presence in the PYTH top-50, as the Tide again found a way to lose a close game, dropping a heartbreaker to the Bulldogs last Saturday. That makes five one-possession losses for Alabama on the season, to go with a sixth where they had the lead inside of 5 minutes left. That was, of course, when the Commodores visited Tuscaloosa Saturday before last. Saturdays have not been kind to the Tide since football season ended[3], but they’ll have an opportunity to avenge that loss later this week on… Saturday. South Carolina continues to putter along at 0.500, separating the decent teams in the conference from the Creamsicles, API, Mississippi State, and poor, poor Missouri, who still hasn’t managed to win 10 games. 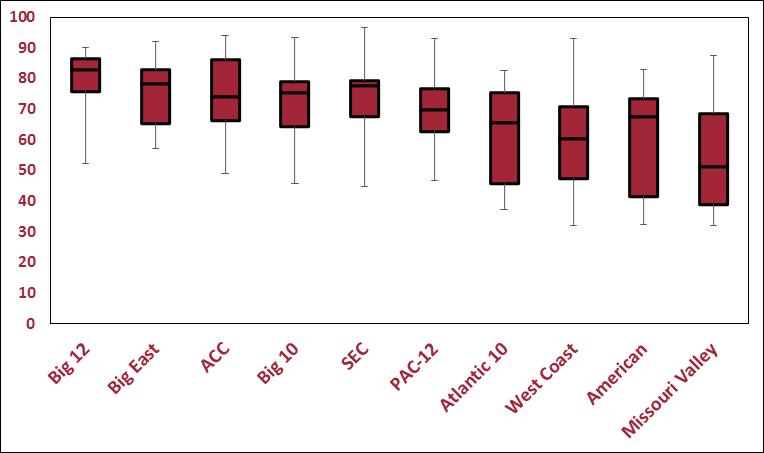 No big movement here this week[4]. The B1G dropped two teams out of the Top-50 after Illinois and Minnesota dropped all five of their games since the last ASR, once again leaving the SEC with the most top-50 squads in the country with 8. Aside from that, the #2-#4 conferences remain barely distinguishable numerically, with just 2.4 rating points separating the Big East from the SEC.

4 | Might have something to do with my not messing with the methodology this time!

A much better slate this week. I actually identified 5 games worth a look, but only these three made the cut.

This one is a test case for the oft-wonky home court adjustment. Vanderbilt is clearly the better team, but as this game will take place in Knoxville the magic box is giving them a win expectancy of just 52.1%, which isn’t much better than a coin flip. They’ve played once this year already, a 76-73 OT thriller in Nashville the Creamsicles were lucky to come away with. As loathe as I am to ever pick these guys to win anything, something tells me they’re going to do it again.

THE PICK: The Creamsicles

These two last played early in the conference schedule — a fun 75-71 win in mid-January for the Tigers — and the rematch looks to be tight as well, now featuring three of the conference’s top-5 scorers in Jordan Mickey, Jarell Martin, and Stefan Moody. A matchup of contrasting styles, LSU is a defensive team that plays at the conference’s fastest tempo, whereas the Rebels play at a pace just above the national average but have a top-15 offense per OE+. On a neutral court this would be the very essence of a toss-up, with just 0.0025 separating the two in PYTH rating, but it says right here the Maravich Assembly Center gives the edge to the Tigers.

Get through this one, and Kentucky has formalities against Georgia and a less-dangerous-than-last-time Florida in Gainesville before completing an undefeated regular season. “Getting through this one” is easier said than done though, as Arkansas has come a long way since that puzzling mid-season loss in Knoxville. The Wildcats’ hyphenated frontcourt of Willie Cauley-Stein and Karl-Anthony Towns will have their hands full with Bobby Portis and the slashing Michael Qualls, who will stretch the nation’s best defense to its limit. Kentucky does not like to play fast[5], and last time they played a run-and-gun team they barely escaped LSU. This one is at Rupp, where the magic box has it pegged at 95.3% for the Wildcats. There is zero justification for picking against them at this point. Tune in for this, it should be fun.

5 | The API game notwithstanding.