Kentucky is still the best team in the land, but does that make the SEC better than the ACC?

But first… box (and whisker) plots!

Last week yall beat me up again about the conference rankings, so now we’re going to go with box-and-whisker plots, which is probably where I should have gone to begin with. I’m going to defer you to Wikipedia for an explanation, but feel free to ask questions in the comments. The chart (which you may click to embiggen if you so desire): 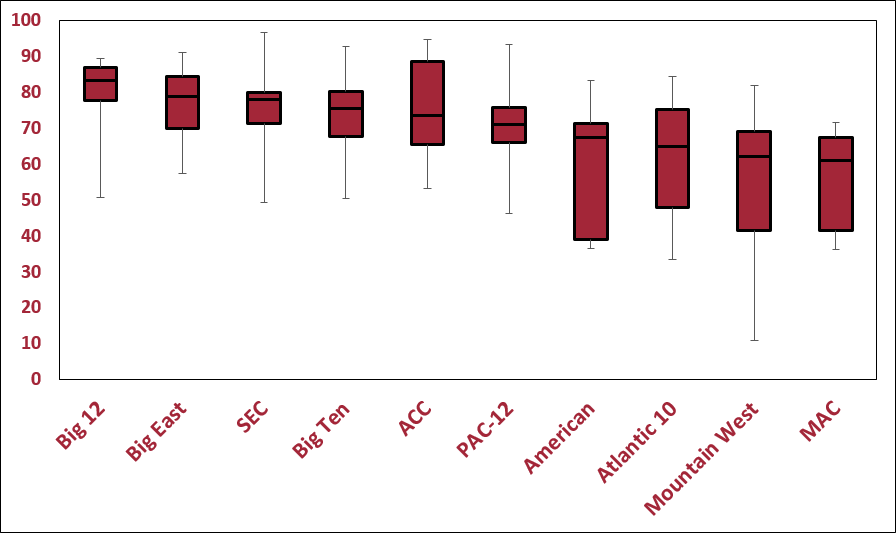 My, what a handsome shade of red that is.

A few points of clarification before we talk about the results. The boxes for this type of plot are always constructed the same — first quartile at the bottom, third quartile at the top, and the median inbetween. The whiskers can vary, however — in this case, I’ve chosen to use the minimum and maximum scores from the set. The scores are based on an even combination of BPI and PYTH, just like I’ve been using for the conference ratings chart below. Finally, the conferences are ordered by median score, such that the highest median score is on the leftmost side of the chart.

You can immediately see what’s been going on with the ACC. Whereas the other major conferences tend to be a logjam in the middle (as evidenced by the shorter boxes), the ACC is very spread out from top to bottom. One of the test cases we discussed to “break” the median score approach was a essentially a bimodal or “two-peak” distribution, where half the conference is rated in the top-10 and the other (slightly larger) half in the 50s, such that the mean is in the 30s but the median is in the 50s. Well, what the ACC is becoming is more of a trimodal distribution, with a pack of great teams, a pack of terrible teams, and a pack of decent teams smack in the middle.

If you take, say, the top third of each conference as your measure of conference strength, the ACC is right there with the Big 12, if not the best conference in the country. They only have five teams in the PYTH top-50, but all 5 are actually in the PYTH top-15, which is damn impressive. The reason they aren’t ranked higher by median or mean combined rating is the bottom of the conference, which features 7 teams outside the PYTH top-80[1]. I probably need to tinker with my ratings to weight the top half of the conference, as those are the teams that will be in play for the tournament, but then the difference sizes of the conferences becomes an issue. For this week I think this chart and the median ratings are sufficient, but the numerical ratings might look a bit different next time around.

I’m not going to talk about the best team in the conference, because there’s really nothing left to say about them — best team in the country, period. There’s a steep dropoff to #2 in Ole Miss, all the way down at PYTH #30. This reveals an issue with rating the SEC, as Kentucky is basically an outlier for the conference at this point. The box plot helps to adjust for that[2], of course, but the disparity is still there. The Rebels are at the top of a pack of eight teams rated within 16 spots of each other in the PYTH ratings, and that pack plus Kentucky gives the SEC 9 PYTH top-50 teams, the most in the country. Texas A&M is at the bottom of the stack right behind Alabama, and they’ve come a long, long way since their defeat in Coleman Coliseum a few weeks back.

2 | The median is resistant to outliers. Have I mentioned that before?

Vanderbilt and their orangey brethren are chilling out in no-man’s land, admirably serving as gatekeepers for the conference’s upper echelon. On the other side of that line is little brother, whose buffoonish antics have driven them straight under 0.500 on the year. They’re now tied in the wins and losses columns with lowly CLANGA, who can happily claim they are not Missouri.

No giant scatterplot with pink triangles this week[3], but look for that to at least be linked next week for yet another viewpoint on the conferences. You can draw your own conclusions from the boxplots, but here the Big 12 is still king. The rest of the major conferences are nicely split out by about 1 to 2 rating points apiece, and then another cliff down to the mid-majors. The SEC is closing ground a bit on the Big East, but the zero-sum nature of conference play means they probably won’t overtake them before tournament time.

3 | Nefarious spreadsheet issues caused by Ken Pomeroy’s penchant for extraneous spaces in his team names. I’m on to you, sir.

Georgia’s been all over the map this season, and their mercurial nature has made predicting games involving the Bulldogs rather tricky. In truth this game will probably be another blowout in Lexington, but you never know with Georgia. If the Bulldogs that beat Ole Miss at home and took LSU to 2OT in Baton Rouge shows up, this could get interesting. If the Bulldogs that lost to Georgia Tech show up… ouch.

This is your one true game of the week, pitting the league’s two hottest[4] teams in Ole Miss (5-2 since the OT Kentucky loss) and Texas A&M (6-0 since their OT Kentucky loss). Getting Jalen Jones back has been huge for the Aggies, as this team’s performance barely resembles the high school team that played Alabama back on January 6th. Ole Miss is more than likely going to torch the Aggies defense though, and given that this one is in their house I’d be surprised if they don’t walk away with it.

This is the first of two tricky games for the Wildcats, on the road against the Gators before traveling to LSU on the 10th. The magic box only gives the Gators a 15% chance of winning, but the O Dome is a notoriously tough place to play, and Florida is surely brimming with confidence after winning two tight games over the Tide and Razorbacks. It’s not going to be enough to stop the death star, however.