Don't look now, but the SEC's thisclose to the #2 slot in the nation.

We’re past the halfway mark of the SEC’s regular season schedule, and more importantly the Tide’s through the meat of their schedule. No more Florida, Arkansas, LSU, or Kentucky until the conference tournament, as the next couple of weeks should be pleasant ones for Tide fans. I thought I’d take a look at what the remainder of the schedule looks like according to PYTH ratings, and this is what I found:

Now these numbers will change as we move forward based on games yet to be played, but what this shows me right now is the Tide have 5 very winnable games over the next couple of weeks. The one iffy one looks to be Georgia, but that game will be at Coleman and will largely depend on which Bulldog group decides to show up (more on that a bit later).

The last three are doozies, however. We’ll know a whole lot more about Vanderbilt by the next edition of Advanced Stats Rundown, as the Tide get them in Coleman on Valentine’s Day[1]. Ole Miss is going to be a tough out, and I think you can pencil in Texas A&M as a loss. I feel like 6-2 is possible through this stretch, which would put the Tide at 20-11 heading into the conference tournament. That seems like NIT material to me, but there’s a lot of ball left to be played. The only team in the conference I would pick to beat the Tide without thinking about it first is Kentucky, and if the good guys can make a little noise in the tourney we might see an NCAA bid after all[2].

1 | Your significant other would love to watch the Tide live on V-Day, gentlemen in the Tuscaloosa area! RTR Support Bama Basketball

Florida came out on Saturday and punched Kentucky right in the mouth, going up by 9 early in the first, only to let the Wildcats get back into it by the end of the half. Kentucky managed to get up early in the second, but Florida wouldn’t let them get more than 5 points ahead down the stretch. Kentucky was ultimately able to fend Florida off, but this was the stiffest test they’ve faced since the pair of OT games early in January. The trip down to the land of corndogs looms large, but we’ll get to that a bit later. As a result of squeaking one out over the Gators, Kentucky remains your top team in the conference and in the country.

The peloton is still topped by Ole Miss, but there’s a bit of a shakeup with Arkansas climbing all the way to third after coming in seventh last week, thanks to a pair of dominating wins over South Carolina and Mississippi State. They’re followed by Florida, Georgia, and hard-charging Texas A&M, who’ve come quite a ways since getting routed by the Tide back in January. LSU, Alabama, and Vanderbilt round out the SEC members amongst the PYTH top-50, and South Carolina is just on the outside of that mark at #52 overall. The Gamecocks are headed in the wrong direction, however, as they’ve now lost 8 of their last 10 games.

From there, we hop off the edge of the cliff and head down to that orange team, who are still slumming it with Bruce Pearl and the Fambly[3]. Erstwhile Mississippi State — who are apparently capable of both beating LSU and losing to the Creamsicles at home — join Missouri as SEC member institutions who have fielded men’s basketball teams for the 2014-2015 season, and participated in games against other member institutions. Cookies and gold stick-on stars all around, guys!

3 | I can’t decide if this sounds more like a soul/funk group or a cult. 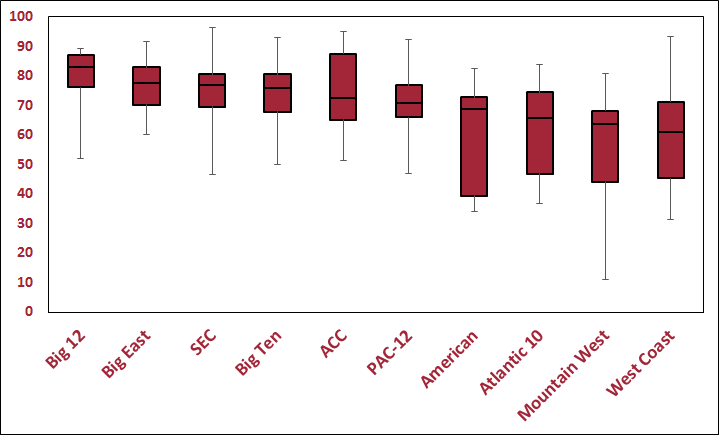 I exorcised the spreadsheet demons that plagued me last week, so for those of you who are so inclined, you may find krnxprs’ Scatterplot of Infinite Torment[4] here. It looks a little different since I had to redo it anyway, so now your best teams are in the upper right as opposed to the lower right, and I connected everything together with lines as it didn’t end up looking too busy on the big plot. Yes, the Big Ten is still represented with the very appropriate little pink triangle.

4 | Should we call it this officially? I feel like we should.

The only major change from last week is the MAC has flipped spots with the West Coast, who have Gonzaga’d their way into the Top-10. The Big East has fallen back to the pack a bit, primarily due to cellar-dweller Creighton knocking off Xavier and Georgetown dropping one to a so-so Providence squad. The end result is the Big East, SEC, and Big Ten are almost indistinguishable at this point, and another rough week from the Big East might see a shakeup in the top 5. It should be noted the SEC has far and away the most top-50 teams in the country at 9, with South Carolina lurking just outside as a possible 10th if they have a good week.

I still don’t know what to make of the ACC. I know I said basically the same thing last week, but the best five in that conference is absurdly good, with all five solidly in the PYTH top-20. Then you jump all the way down to the Gottfrieds at 56, and from there it’s a sliding scale from mediocre to crap. I feel like my ratings don’t properly account for a conference like that, and I still need to tinker around with some kind of weighting system to help account for it. I was supposed to do that this week, but uh… I didn’t. Please direct all inquiries regarding refunds to Mr. Evans.

Kentucky is far from out of the woods as far as the undefeated record is concerned, as their reward for tipping Florida on the road is a trip to play arguably the next most-talented team in the conference in LSU. This is one opponent where Kentucky doesn’t have an absurd size advantage, as LSU’s frontcourt is more than a match for Kentucky’s. Where the Wildcats are going to win this game is protecting the ball, staying out of foul trouble, and leveraging their depth, three areas where LSU is more than vulnerable. Looking at the schedule this is probably the last game Kentucky might conceivably lose until the tournament, as they get Arkansas and a rematch with Florida in Rupp Arena. It says right here that the ‘Cats are winning out, however, which means LSU isn’t taking this one.

Texas A&M finally dropped one on the road in Oxford, ending a six-game win streak that started after the 2OT heartbreaker against Kentucky. Georgia’s played well at times this year, but they are coming off two beatings on the road to the ‘Cats and the Gamecocks, and barely outlasted a mediocre Creamsicles squad on Saturday. If the team that beat Ole Miss shows up, this could get interesting, but I think A&M continues their resurgence and takes this one at home.

This is your game of the week. Last time these two matched up it was in Fayetteville, and the Rebels dropped 96 on the ‘Hogs in a 14 point drubbing. Ole Miss has been up and down at home this season, but their only conference loss was by 4 to LSU back in mid-January. I expect this to be a carbon copy of last time, and while Ole Miss won’t beat the ‘Hogs as badly they ought to win this one too.