Taking stock of the conference at the conclusion of regular season play, and previewing the Tide's upcoming tilt against the Gators

But First, A Few Programming Notes

Due to a couple of factors[1], my reign of statistical terror over your favorite Alabama blog has been temporarily halted, and thus this week you get one combination Advanced Stats Rundown / Processing the Numbers instead of the normal two pieces. We’ll run down the SEC and national conference standings at the conclusion of the regular season, and then move into the Texas A&M review and Florida preview where you normally see the Non-Alabama Games of the Week.

1 | A robust and unshakeable laziness on the part of yours truly, plus the other RBR contributors who, you know, want to be published and stuff.

Also, we’re[2] cooking up a bit of a bracket extravaganza for you, both of the NCAA and NIT varieties, to run next week after the fields are settled on Selection Sunday. Look for the NCAA piece on Monday, in time for consideration in your March Madness pools, and the NIT piece on Tuesday morning before the games tip-off.

2 | Not the royal we! Bamabrave4, btbama22, and myself are all collaborating in some form or another.

Kentucky completed the first undefeated regular season in school history with a thorough pantsing of Florida last Saturday, and ride into the SEC Tournament as the #1 seed. I’ve said this a couple of times, but I’m not really sure who beats this team — the frontcourt is apparently the future of the NBA, after all.

Surprisingly enough, there was quite a bit of movement in the next six slots as a result of the season’s final week. LSU was your #2 last week, but they dropped all the way to #5 after a beatdown — yes, a beatdown — at the hands of the Creamsicles, in Baton Rouge. They then proceeded to tip Arkansas on the same floor a few days later. Outside of Kentucky, nothing made sense this year in the SEC.

Arkansas slides into #2 to align with the conference win-loss standings, followed by Georgia and the nuclear Vanderbilt at #4[3].Ole Miss held steady at #6 after splitting their two games, followed by Texas A&M, who we’ll discuss in more detail later, at #7.

3 | Winners of 5 in a row and 8 of their last 10. They can’t play Kentucky until the finals, in case you were curious.

Florida is hanging on for dear life at #8, but will likely miss out on the NIT unless they find a way to beat both Alabama and Kentucky in the tournament — you don’t need me to tell you the chances of that happening. The Tide will meet the Gators on March 12th in what may be the final contest between Billy Donovan and Anthony Grant for some time — more on that in a bit.

South Carolina and the Creamsicles managed to finish at 0.500, but fortunately for proponents of all things right and proper in this world, the latter team is next in line for the Vanderbilt buzzsaw in the tournament and will likely drop out of the NIT consideration as a result. South Carolina may back into the same after an up-and-down season, but will have to go through the mighty Missouri Tigers to do it. Missouri did manage to tip API in Columbia, but couldn’t solve Mississippi State in Starkvegas to make double-digit wins for the year. Speaking of those two, they also fielded basketball teams and participated in the 2014-2015 SEC basketball season, much to the delight of their respective fanbases.

In case you haven’t come across it, the bracket for the 2015 edition of the SEC Tournament can be found here. This year the tournament returns to Nashville’s Bridgestone Arena, better known as the home ice of the NHL’s Nashville Predators. This is a neutral site[4] for everyone except possibly Vanderbilt. South Carolina, Missouri, API and Mississippi State kick things off tomorrow starting at 6 PM CDT / 7 PM EDT on the SEC Network and WatchESPN.com.

4 | Insofar as any site can be considered "neutral" where Kentucky is concerned. I wonder if Drake will make any appearances? 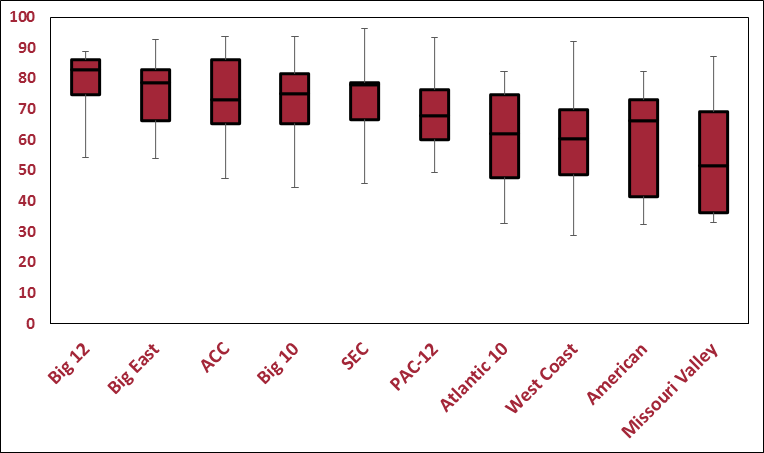 The Big 12 held steady this week, with an unchanged combined rating and a median rating that crept up just a bit. The other 5 major conferences backslid to varying degrees, with the ACC dropping 0.4 points to "lead" the pack. The SEC’s box plot in particular is kind of amusing, as the upper crust of the conference is now so compacted it may as well not even be on the chart. We’ll take a look at this again after Kentucky wins the national title all the tournaments are done, once the major conferences have another round of inter-conference play to shake out the standings.

This, quite simply, was unlike any other game the Tide played this season. Shifting back into "suck in the first half" mode, early success in the paint gave way to yet another scoring drought, and at the end of the first half the Aggies were up 36-22. Just to put that in perspective, the first half scores in the two Kentucky games were 35-17 and 37-24. To say hope was low would be an understatement.

In the second half, however, the Tide offense locked in under the guidance of Levi Randolph, Retin Obasohan, and Rodney Cooper, and the first-half deficit was erased by the 12.5 minute mark. From that point on the teams traded the lead 6 times, culminating in a 60-57 Texas A&M lead with two and a half minutes remaining. The Tide defense took over, forcing four straight missed shots for the Aggies, and Obasohan and Cooper put in a bucket apiece to give the Tide a totally unexpected — and sorely needed — 61-60 road victory.

For a more in-depth, qualitative review of the game, check out btbama22's celebratory game recap.

Unlike the previous game against Ole Miss, the Four Factors truly reflect how close this game was. The margins in each factor were 2% or less, which is crazy. The Tide outshot the Aggies by just a little, which is probably the main reason they took the game. They also turned the ball over one less time and picked up one additional free throw attempt, but were outrebounded on the offensive boards by just a smidge. The 1 point margin in Win Index matched the final margin on the scoreboard quite nicely, for once.

Wait, aren’t you supposed to be previewing something, nerd?

Right! Next up, the ninth-seeded Alabama Crimson Tide kick off their improbable run to the SEC Tournament title with a rematch against the eight seed Florida Gators. The game is on Thursday, March 12th, at 12 PM CDT / 1 PM EDT, and will be televised on SEC Network and, fortunately, WatchESPN.com, since most of you will be at work/in class/whatever it is you do during the day while this game is happening.

Ratings information as of 9 March 15.

So, what do we know?

Last time these two teams played was, of course, the end of Ricky Tarrant’s season and not-so-coincidentally when the train went off the tracks for the Crimson Tide. The tough, two-point loss in Tuscaloosa was as close as the margin indicated, with the Tide’s inability to match up with Chris Walker inside[5] providing the difference. Florida’s dealt with injury concerns of their own since then, with lead guards Dorian Finney-Smith and Michael Frazier II both missing extended stretches of time. The latter returned to log 18 minutes off the bench against Kentucky on Saturday, however, and all signs indicate he will be ready to go for the Gators on Thursday.

5 | Jimmie Taylor got in foul trouble in a hurry, and only played 10 minutes in the game.

The advanced metrics continue to peg Florida among the upper crust of losing teams in the nation, and the reasons for that are clear elsewhere in the tables. For one, they’ve underperformed mightily this season, as the third-most underperforming squad in the country according to Luck rating. They’ve also played an absolutely hellacious schedule, facing Kentucky, Georgia, Ole Miss, LSU, Vanderbilt, and Texas A&M twice apiece in league play, alongside North Carolina, Kansas, and Georgetown in out-of-conference play — good for the 7th-toughest schedule in the land according to PYTH rating. The thoroughly anemic offense is a big part of the losing record, but suffice it to say Kentucky probably doesn’t go undefeated against that schedule[6].

6 | Insert coachspeak about beating themselves here.

Speaking of the offense, that’s one area where Grantsketball defense should carry the day, as the Tide has a significant edge on that end of the floor. The only problem is Florida’s defense is elite once again, posting the #9 DE+ rating in the country at the end of the regular season. The Tide’s offensive efficiency has actually crept back ahead of the defensive one for the first time in a while, but unfortunately that’s more indicative of flagging defensive effectiveness than anything else. Much like last time, the Tide will struggle to find open looks against the Gators.

Florida’s been an extremely tough team to predict this year, as they’ll do things like lose to pre-nuclear Vanderbilt one game and then take Kentucky to the wire the next. One constant is, of course, Billy Donovan, who holds an undefeated record against his protégé. The Tide were able to shut down Finney-Smith and Frazier in the last game, but Taylor absolutely must be able to stay on the floor to match up with Walker. The highly-touted sophomore has largely been a disappointment in orange and blue, but we saw last time what happens when he plays a team that can’t defend him. As much as I would like to pick the Tide in this one[7], I just don’t see it, and the magic box’s prediction of 54.2% in favor of the bad guys sounds about right to me.

7 | Neither one of these teams is beating Kentucky in the next round anyway, and I think the Tide made the NIT Saturday regardless.