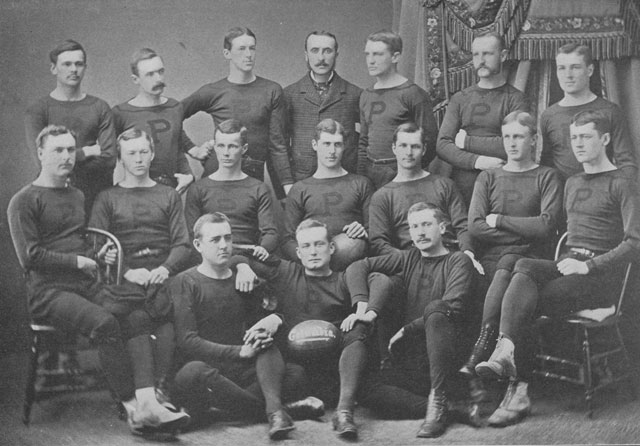 There were no set rules when football invaded the Ivy league. Why the Ivy league? Of course the Ivy league. Only the richest kids in America could afford to take their schooling abroad. And when they would come back from their English educations, where would they go? To an Ivy league school, where all the other kids their age and income were. And some brought this football with them.

It is a game of kicking. Part of the allure is that the ball can't touch you for too long, really any time at all. You have the ball, you rid yourself of the ball. You progress the ball, you move it towards the other team's goal. But you can't hold the ball. If you hold the ball, you stop. Then you get rid of it. You have to. Because the other team is allowed to wrestle the ball from you, so if you stop, it's in your best interests to get rid of the ball as quickly as possible.

Posts rest in the endzones. If you've got a good leg and sure aim and you've managed to give yourself a little distance from the opposition, you can punt the ball. You can see how this might be a rather difficult task, and this is exactly why when football began, if your kick sent the ball between those upright posts, you were awarded five points. Granted, it's not too insanely difficult for someone to kick a ball that falls short but bounces its way through the posts, so it was little time before a beam was put between the post that nothing could go under: if you were to try a punt, you'd better put some air on it.

Most players could not aim or kick the large globe of a ball with enough force or consistency of arc while under duress to make this goal. A few could get it with no interference from the opposition, and if they could get close enough to the opponent's goal (a feat of manliness more so than a feat of superb aerodynamics and leg strength), they could place the ball in the endzone and score a "touchdown." This gave you the least amount of points (only one), but it also gave you the chance to try a kick unimpeded. A free kick, which was worth four points. Kicking was a difficult task, and having someone on your team who could successfully deliver the kick was everything.

A team's ability to progress down the field largely depended on the size and strength of their players. The smaller the players, the more likely a team would be to employ the first and most dangerous innovation in college football: the wedge. Every "offensive" player locked arms with a ball carrier behind them and pushed forward like a tank, slowly moving the ball down the field. Escaping injury during this exercise was mostly a matter of quick reflexes. The "defense" would bring their biggest guy and have him engage in the most extreme version of red rover you'll ever see on American soil. He was the 'wedge breaker,' and the name speaks for itself.

One key innovation in open field play was the quick realization that you could dribble the ball. If you could get a guy open, he could dribble his way down the field and then, if he got close enough, have a go at the uprights. Team's that honed their field play quickly excelled.

There were field play rules in place that everyone sort of agreed to stating what members of a team could be on one side of the ball or the other at any time. This is probably where the offense and defense came about. The thing is, most rules were there and had been there for some time. It was the minor variations of those rules that initially kept the game in such a state of relative flux and utter independency of committee for the first decade of the sport.

For instance, Harvard adopted the Boston game almost immediately, which allowed for a person who was dribbling to run a bit while carrying the ball if someone gave them chase. They certainly were't allowed to just take off, but they could edge a bit of the turf, and this freed up the game in a way Harvard took to immediately. However, this was in 1874 and Princeton had already pretty securely managed to perfect their version of the game and had no desire to play with the rules. Most teams recognized the importance of at least getting a chance to play Princeton, and they followed along. Harvard was forced to play Canadian schools, men's athletic clubs, and alumni groupings for the first few years of its existence.

Meanwhile, Yale took it upon themselves to become innovators of the sport, constantly looking for ways to make it a better game and one that people would actually sit down and watch. They would be the first team to travel to England to play the sport against Eton, and Eton played with eleven men on the field per team instead of twenty-five. You could do a lot more with eleven than you could with the chaos that was twenty-five. Yale came back excited. But, like Harvard, they would have to find a way to convince the other schools that this was an idea worth pursuing.

Not to say that Harvard and Yale found kindred spirits in one another's desire to innovate the game, but they did eventually play one another and learned from each other (1874). By 1876, the teams finally convinced Princeton to at least talk things through. At first, nothing happened, but they at least met (the Massoit Convention), and four of the teams agreed to codify some rules: Columbia, Harvard, Princeton, and Yale. The amount of players on the field did decrease from twenty-five the first year to twenty-two, and then eventually to an astounding fifteen. The Intercollegiate Football Association was born. It was eight young men in a room that went to all of four colleges, but it was still intercollegiate, it was still an association, and football was the subject of the hour.

Walter Camp played for Yale and was the flagbearer for game innovation. The one in the corner during meetings with a pen and a napkin, his mind going all over the place with great ideas that nobody was listening to. Every year he advocated for eleven men. Every year he'd get a tiny bit of compromise, but little else. Every year he kept trying.

By 1880, his seniority and influence had finally worn down the resolve of the other committee members. College football was already a decade old and still a toddler, learning to walk. Walter Camp would be the man who held its hand and led it into grammar school.

Sources: I made notes months ago from a host of various online sources that I failed to make account for. If it turns out anything I said was fabrication, this was based on gut feeling gleaned from the notes I had. Could I have looked things up to answer for myself on a detail here and there? Yeah. But nobody's paying me, so whatevs. (example: I honestly don't know if Yale was the first American team to go to England to play football, but it's noteworthy they played Eton, and there's absolutely no record of any American team playing Cambridge or Manchester Prep, etc, so I went with it).

Did you read this?