The season enters its final stretch, but the regular season title is already off the table.

By virtue of their easier-than-expected win over the Razorbacks, Kentucky ran their record to 29-0 over the weekend, and more importantly clinched the SEC regular season title. That’s great news for Wildcats fans, as it means regardless of what happens in the SEC Tournament, Kentucky is now guaranteed a slot in the NIT. Congratulations, guys, you’ve earned it!

In all seriousness, who beats this team at this point? All of the big players nationally have shown serious flaws over the course of the season, whereas the only criticism you can really have of the ‘Cats is that they’ve played down to the competition at times[1]. I suspect if and when they tussle with teams like Virginia, Arizona, Wisconsin, and Duke in the NCAAs, you’ll see more of an effort like Saturday’s than anything else.

1 | Notably, Texas A&M without Jalen Jones and the UF game.

LSU leapfrogs Arkansas into the #2 slot, which makes sense given the Tigers were the only team to really test Kentucky this season when they weren’t screwing around. Arkansas is just behind at #3 — losing to Kentucky this year is nothing to be ashamed of, and nothing to be punished for — and those two will conclude the season in Fayetteville in what should be a fun one. The indistinguishable group of Georgia, Texas A&M, and Ole Miss close out the SEC contingent in the PYTH top-40.

Just behind the Rebels is @#$!%& Vanderbilt, who beat Alabama yet again Saturday in Nashville, and have now won 6 of their last 8 games after opening SEC play 1-7. Florida has now dropped all the way to #8, after slotting in at #2 in the first Advanced Stats Rundown back in mid-January. They’re barely hanging on in the PYTH top-50 by virtue of several close losses to good teams in non-conference play, as well what can only be considered a stunning win over Arkansas in hindsight. They get the final crack at Kentucky before the tournament, but it’s in Rupp Arena so…. good luck with that.

After yet another Saturday loss, the Tide’s efforts in February resulted in a certain ignominious perfection: they won every mid-week game, and then proceeded to lose every Saturday game in the month. W-L-W-L-W-L-W-L, with the final three Ls being totally winnable games. This team could be sitting at 20-9 right now, on the bubble looking at a potential berth in the big dance. Instead, it’s likely a high seed for the Tide in the NIT, and RBR will be taking a look at that a bit later this week.

Speaking of winnable games, the Tide were able to excise their Gamecock demons from earlier in the season with a strong 59-51 win over South Carolina in Tuscaloosa. The Gamecocks remain in the Pyth top-100, but that’s entirely due to an unbelievable win over Iowa State on a neutral court that serves as the high-water mark for their season. They managed to get back to 0.500 by dispatching poor Mississippi State, but look to be headed for 14-16 with games against a pissed off Arkansas and the Creamsicles to close out the schedule. I wonder who Frank Martin is going to flip his lid at about that one[2]?

2 | After watching him loudly chew out Laimonas Chatkevicius, after he clawed for a tough bucket, I have to wonder what’s wrong with this dude[3].

3 | Yes I know asking that question as an Alabama fan is ironic. Shut it.

The usual suspects make up the bottom 4, with the Creamsicles, Alabama Poly, Mississippi State, and Missouri continuing their moribund ways. The only excitement here for next week is the Mizzou watch, as they may be able to crack double digit wins with a game at home against Bruce Pearl and the Fambly and on the road at CLANGA to close things out. I think they handle API, but State beat them by three in Columbia and has been sneaky-tough in Starkville this season. 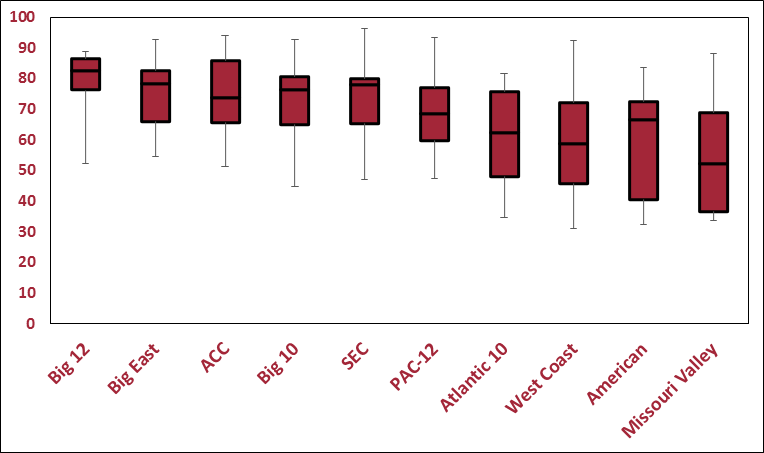 I may need to rethink how often we look at this next season, because these charts don’t change a whole lot once you get out of non-conference play. That makes sense, of course — conference play is a zero-sum proposition, so it’s only the massive upsets that move the needle, and those are massive upsets for a reason. One of those was Gonzaga’s loss at home to BYU on Saturday, which featured a #3 team losing to an unranked squad according to the AP, but the #4 team losing to the #30 team according to KenPom. Even that big of an upset only dropped the conference rating for the WCC by a tenth of a point, which makes what happened to the PAC-12 this week even more astonishing.

The WCC’s Best Coast roommates fell a full 0.7 points this week, which given what we just discussed with regards to conference play is an astonishing drop. That appears to be the unfortunate confluence of numerous upsets over the week, all of which managed to take some shine off of the PAC-12. The first was Oregon’s 11 point drubbing of Utah at home on February 22nd, which dropped the rating a tenth of a point — much like the Gonzaga-BYU game mentioned above. Next was the biggie from this week — Kansas State’s shocking upset of a thoroughly overrated Kansas[4], which stood as Utah’s second-best non-conference game in a 3 point loss to the Jayhawks on a neutral floor back in December. NC State’s 8 point road win over North Carolina on the 24th probably depressed UCLA’s[5] non-conference schedule ratings a bit, despite the Tarheels’ 18 point detonation of the Bruins in that one.

5 | Fourth in that conference according to the advanced metrics. Marquee OOC win yall!

At this point, the PAC-12’s rating dropped 0.3 points from the previous ASR, heading in to February 26th. Something happened on that day that dropped the rating another 0.3 points, and for the life of me I cannot figure out what it was. There were numerous upsets among the NCAA’s lower classes, but nothing that really jumped out at me as clearly affecting the PAC-12. I suspect it’s a series of second-order effects that I’m not going to tease out just by looking at scores — a team with a bad loss might have previously upset a team that was an important win for the PAC-12 early-on, so even though there wasn’t a direct connection from the game in question, it hit the conference just hard enough, and so on. That’s the fascinating thing to me about the opponent-adjusted statistics — sometimes it’s a KSU-over-Kansas level upset that’s the undoing for a particular team or conference, but sometimes it can be a series of small games that add up to an even bigger impact.

We’re at the homestretch, with just one week remaining in what’s been a fun season[6] in the SEC. I found two games from the final day worth a look.

6 | Unless you’re a Gators or Tide fan, in which case you’re either rooting for Kentucky now or sobbing into your adult beverage of choice, respectively.

Expect a lot of offense, as this pits the conference’s two highest-tempo teams that, as noted last week, have completely contrasting approaches to the game. On the one hand you have LSU, with one of the stingiest defenses but a pretty average offense that apparently fails to fully utilize the talents of Jarell Martin and Jordan Mickey. On the other you have Arkansas, flying high behind Bobby Portis and Michael Qualls when they have the ball, but a complete sieve on the other end. This is strength vs. strength, weakness vs. weakness, all the way down the line. I fully expect this to be one of the games of the week in college basketball, and I’ll admit I’m considering watching this over the Tide game on at the same time, for obvious reasons. As far as who wins? This is definitely a toss-up on a neutral court, but it’s in Fayetteville, so I’m going with the Razorbacks.

This one has shootout written all over it. I mainly highlighted it due to the difference in trend between these two teams — as noted, Vanderbilt’s won 6 of their last 8, and the two losses were by exactly three points. Ole Miss will have lost three in a row by tipoff[7], and have lost 3 of their last 5, stretching back to a fantastic game against Arkansas on Valentine’s Day. Neither of these teams is interested in playing defense, but Ole Miss has the slightly higher-powered offense and the home court advantage to boot. If you want to see something like 85-80 out of your college basketball game, tune in for this one.