The Wacky World of Week 2 Polls

Share All sharing options for: The Wacky World of Week 2 Polls

Before we get into the madness of this week's Massey composite, let's take a look at the AP and Coaches Polls... 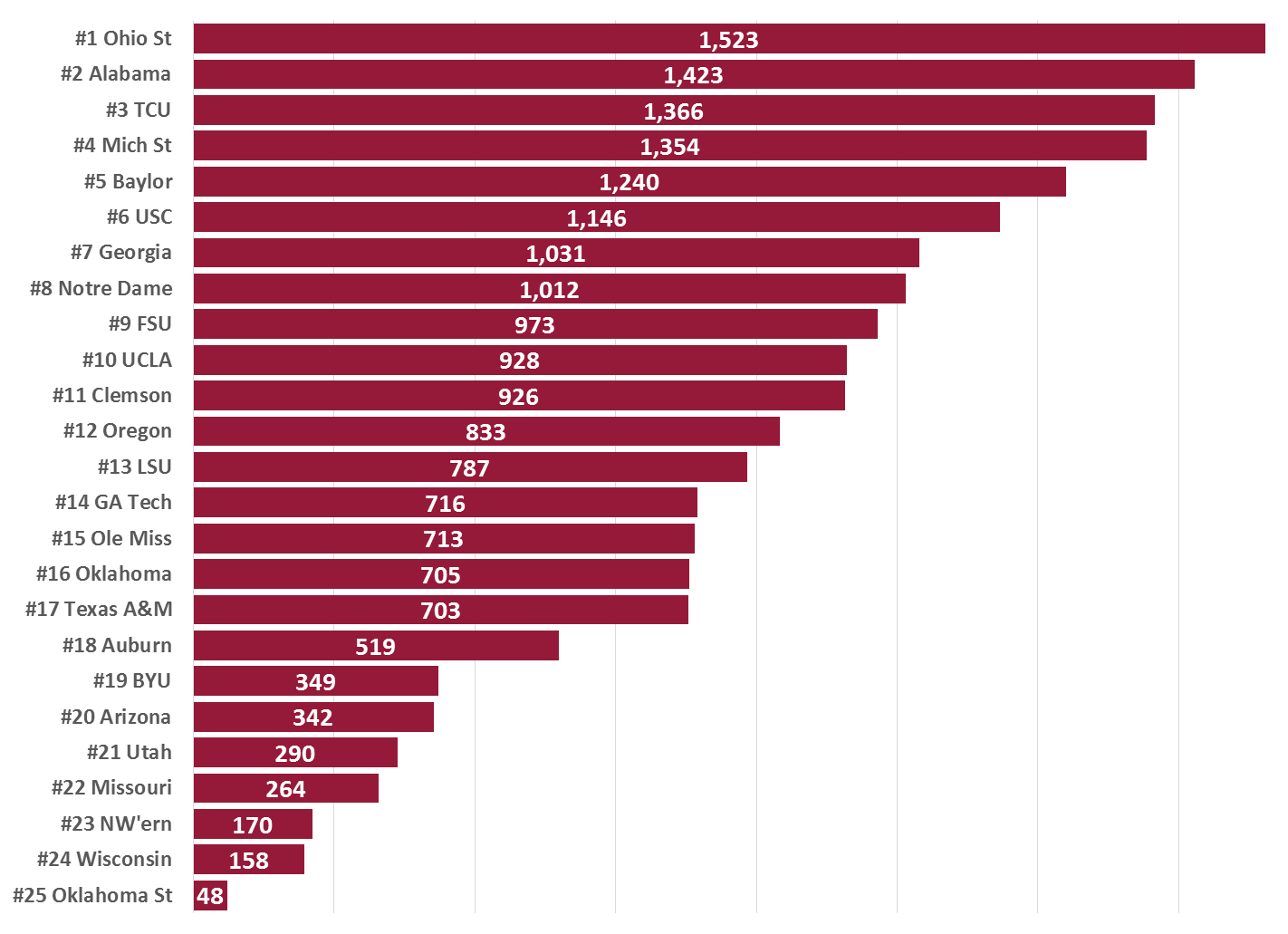 Ohio State is no longer the unanimous AP #1. #4 Michigan State picked up two first-place votes after beating then-#7 Oregon 31-28.

After setting the record with 10 SEC teams in last week's Top 25, the conference now has only seven ranked teams. Tennessee, Arkansas, and Mississippi State fell out after losing to Oklahoma, Toledo and LSU, respectively.

Who are Texas A&M, LSU and Ole Miss?

After two weeks of football, there is still a great deal of uncertainty about a lot of the SEC teams in the Top 25.

Kirk Bohls gave two SEC teams their worst rankings of the week. Besides being one of three voters that have Bama at #5, he has LSU at #22. The Tigers are #5 on Mitch Vingle's ballot.

Eric Hansen has Ole Miss at #4, but Jon Wilner has the highest-scoring team in the country (74.5 ppg) ranked 25th. Guess we'll find out Saturday if the Rebels are for real.

Auburn fell from #6 to #18 after The Scare at Jordan-Hare against FCS Jacksonville State. They're so far behind #17 Texas A&M that the AP probably could've just published a Top 17 this week.

Robert Gagliardi still has Auburn ranked #6 and Bob Asmussen has them at #7; I assume their cable was out or they were too mesmerized by the giant scoreboard to notice just how badly the Tigers got outplayed on both sides of the ball.

Auburn is unranked on nine ballots.

Auburn and LSU meet this weekend in Death Valley.

UPDATE: The AP's Ralph Russo is calling out the 52 voters (of 61) who still have Auburn ranked.

Auburn is No. 18 in Top 25. Our @RalphDrussoAP: 'Voters should have dropped Auburn out' http://t.co/SGK2s2ioPE #WDE pic.twitter.com/IABoXPU5NN

Wisconsin moved back into the Top 25 after beating Miami-Ohio 58-0.

The Top 5 have separated themselves from the rest of the pack in the Coaches Poll, and it's virtually a three-way tie for #6.

Thirteen SEC teams got Top 25 votes in the Coaches Poll this week, including South Carolina despite suffering a close home loss to Kentucky. Tennessee checks in at #27, Mississippi State is #30, Kentucky and Florida are tied at #37, Arkansas is #45 and the Gamecocks are #49.

Combining the 44 sources available in this week's Massey Composite gives us the following Composite Top 5:

Alabama will play seven of the other eight Top 9 teams in the SEC. We don't play SEC #7 Missouri (yet).

Three SEC teams are ranked #1 overall in at least one source in the Massey Composite:

Aside from Ole Miss and LSU getting first-place rankings, the Solecismic rating has Georgia at #3, Pugh still has Auburn at #5, and Hatch, who has LSU at #1, has Kentucky at #4! 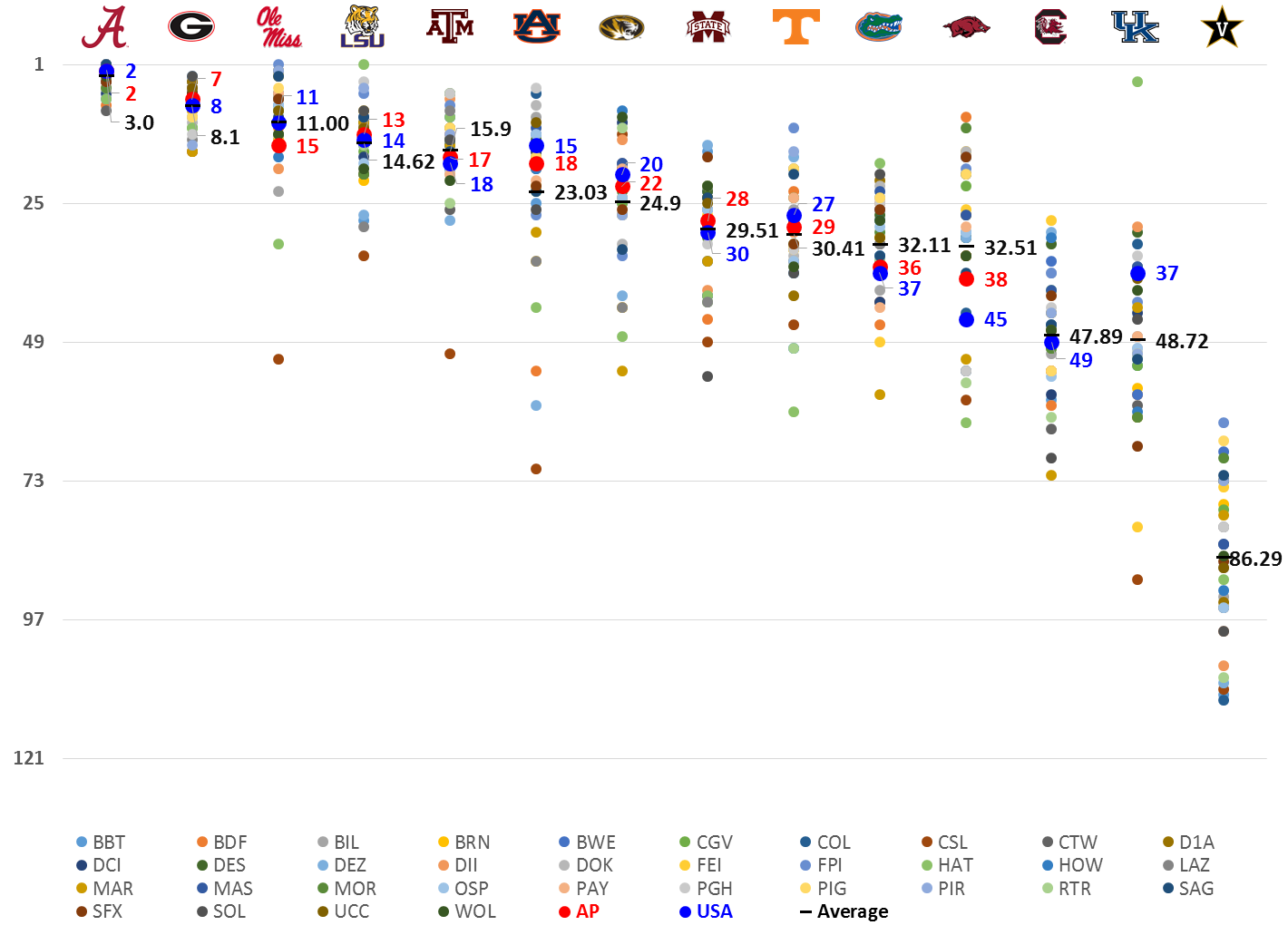 Once again, the CSL rankings are tough on the SEC, giving six teams their worst rankings in the Massey composite.