College Football Random Thoughts From Around the Country: Week 2

Share All sharing options for: College Football Random Thoughts From Around the Country: Week 2

After an excellent opening week for the SEC, Week 2 was a weekend to forget. Two teams suffered high-profile losses. Even the wins were less than spectacular.

As bad as Tigers QB Jeremy Johnson looked against Louisville, his performance against the FCS Gamecocks failed to quell the charging doubters. At least his two interceptions were less than the three he tossed against the 'Ville. Excuse-makers are saying that as a pocket passer Johnson does not fit into Gustav Malzahn's scheme. Soooo.... whose fault is that? DC Will Muschamp has yet to turn the defense into the 1985 Chicago Bears. His squad gave up 438 yards on Saturday. To make things worse for Aubie, Louisville suffered a home loss to Houston 34-31.

By all accounts, Jax State should have won this game but their head coach John Grass unwisely took a knee with 39 ticks and the ball at their own 35 after Daniel Carlson kicked off out-of-bounds. Even if they don't convert, you make Auburn sweat and keep them on their heels. Resigning to overtime swung momentum back to Auburn. 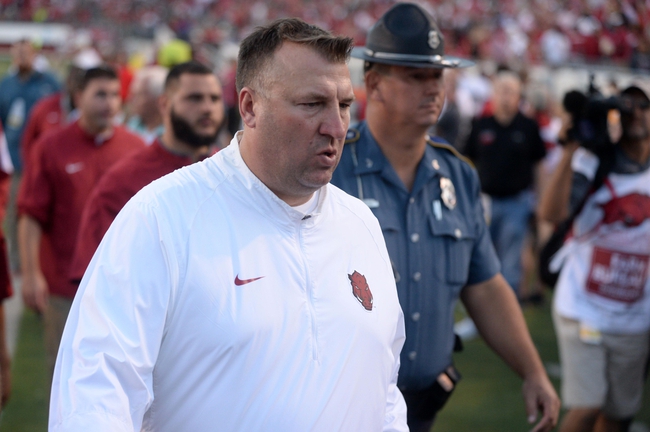 Wow. This past week, Bret Bielema was complaining about Ohio State's schedule when clearly he was not concerned about his own schedule. Former Alabama quarterback Phillip Ely threw for 237 yards and the Toledo defense held Arky to 103 total rushing yards. Alex Collins gained only 54 yards on 20 rushes. This team clearly misses injured RB Jonathan Williams. The Razorbacks shelled out $1 million for the honor of this smackdown.

The Tigers took a 21-6 lead into the fourth quarter. Dak Prescott (34/52, 335 yds, 1 TD, 1 INT) brought the Bullies back to a two-point game but the lack of a running game (43 yards) hurt them. Leonard Fournette was the only highlight with a career high 28 carries, a career high 159 yards, and all three scores for LSU.

After 18 minutes and 46 seconds of play, the Vols took a 17-0 lead over the shocked Sooners and then decided... that was good enough. Oklahoma came backed to tie the game with 40 seconds remaining and win it in the second overtime when Joshua Dobbs threw an interception to end the game. It is still difficult to say how good either of these teams are but both have the recipe for "spoiler" in their conference.

BYU 35 Boise State 24 - The Cougars ruined any chance the Smurfs had at crashing the party. Thank you, BYU.
Kentucky 26 South Carolina 22 - How long will SC tolerate the Steve Spurrier farewell tour?
Michigan State 31 Oregon 28 - The Ducks are not eliminated yet. However, there is no room for error with Utah, Arizona State, Stanford, and Southern Cal still on the schedule.

Georgia 31 Vanderbilt 14 - UGA QB Greyson Lambert was dreadful. His replacement Brice Ramsey was not much better. Following the script, Mark Richt ran Nick Chubb (19-189) and Sony Michel 12-56). A pick-six and a punt return for a TD saved the Dawgs from embarrassment.
Florida 31 East Carolina 24 - The Gators had 12 penalties (two unsportsmanlike conduct) for 105 yards, a fumble and an INT but managed to sneak by the Pirates for an ugly win.
Missouri 27 Arkansas State 20 - The Good Maty Mauk/Bad Maty Mauk show continues as he went 16 for 36 for 148 yards, 3 TD, and 2 INTs. Ailing RB Russell Hansbrough could only muster 5 carries for 15 yards.
Texas A&M 56 Ball State 23 - Kyle Allen (10-13, 126 yds, 3 TD, 0 INT) is clearly the best signal caller for this team. Yet he was again forced to share time with freshman Kyler Murray (9-14, 65 yds, 1 TD, 0 INT). Freshman Kwame Etwi picked up 116 yards on 12 carries.
Ole Miss 73 Fresno State 21 - Back-to-back 70+ points games for the Rebs but 14 given up in the 2nd quarter and and a TD in the 3rd quarter.
Alabama 37 Middle Tennessee 10 - The Crimson Tide was never in danger but Nick Saban was not pleased with many facets of the game.

Michigan 35 Oregon State 7 - Harbaugh gets his first Michigan win over a weak PAC team.
Notre Dame 34 Virginia 27 - UVa fought back to take a late one point lead but to no avail.
Utah 24 Utah State 14 - The Utes quietly roll along.

SOMEBODY HAD TO WIN:

Georgia State 34 New Mexico State 32 - Two of the worst teams in FBS. So, awful, I cannot even finish thi

Krazy Kristi's "SHUT UP!" of the Week goes to the granola capital of the world Oregon who saw both of their FBS schools lose to teams from the oven mitt state. Also, the professional trolls like Danny Kanell who already had Jeremy Johnson in New York receiving the 2015 Heisman.

ADOPT-A-TEAM
South Alabama got spanked 48-9 by a ticked off Nebraska team. I think that is all we need to say about that.

A couple of teams to keep your eyes on:

STAT OF THE DAY

HEISMAN HYPE
With the exception of one year, the Heisman Trophy voting is basically a hype award. That being the case, we'll bring you "Who Will Win" and "Who Should Win".

- The Aggies are little scary.
UConn at Missouri 11am/12noon, ESPN

- The 'Dores might just get a win!
South Carolina at Georgia 5pm/6pm, ESPN

- Is this the winnable game that UGA blows this year?
Texas Tech at Arkansas 6pm/7pm, ESPN2

- The Hogs can still salvage the season with a win here. A loss could start a tailspin.
W Carolina at Tennessee 6pm/7pm, ESPNU

- Can UK take that next step? Can UF?

- Clemson has played nobody to this point. The 'Ville is reeling.

- A distant road game for the 'Noles. BC Shoulda-coulda-woulda beat FSU last season.

- A Longhorns loss would be epic.
Stanford at #6 SoCal 7pm/8pm, ABC

- During commercials, check this game out.