Alabama has a very strong service. Still, one ranking source is drunk. And, while Auburn is the AP/Coaches sweetheart, over 30 other analytical polls suggest the Tigers are ranked too highly.

Share All sharing options for: Polling The SEC: Week One Composite Rankings

Week One of the 2015 season is in the books, and the SEC has already set a new record -- most teams in the AP top 25, with a staggering ten (10!) conference teams ranked.

As I did with preseason polls, I have combined 37 polls and ranking services to see how SEC teams are ranked. Here's what I found.

The number of great and really good SEC teams is astounding.

Besides the aforementioned AP Poll record, Massey has 11 SEC teams in his Top 25 and 12 in his Top 26.

Thirteen of the 14 SEC teams are in at least one source's Top 25 -- even Kentucky.

There are two SEC teams in the Composite Top 4.

Alabama jumped TCU, Oregon fell from 3 to 5, Georgia jumped from 6 to 4 (despite getting a lower average rank), and Baylor fell from 5 to 6.

The Tide Proved Its Mettle

Alabama had the highest preseason average rank and the lowest range and standard deviation of all SEC teams, which means that everyone knew they were going to be good. Even with questions at quarterback, the Tide rolled over Wisconsin and improved its average ranking from 3.4 to 2.9, including moving from #3 to #2 in the Coaches and AP Polls.

Twelve of the 37 sources ranked the Tide #1:

Either Auburn Is Overrated or 30 Polling Services Are Very Wrong.

I don't mean to Gump, but it would appear that the major polls are overvaluing the Tigers.

A&M entered the season hoping new defensive coordinator John Chavis could improve on a defense that was dead last in the conference a season ago. The Aggies would know early on whether or not the hire was a good one as they faced #15 Arizona State in Week 1. The Aggs rolled 38-17, and the defense that allowed 450 yards per game last season gave up fewer than 300.

CSL has the fewest SEC teams in its Top 25, they dropped SEC teams that won and severely underrated half the conference.

CSL has only four SEC teams in its Top 25 (#7 Bama, #8 Georgia, #18 Missouri, #22 Mississippi State). No other polling service else has fewer than eight ranked conference teams.

On the other side of the coin, while ESPN's FPI gave Alabama it's worst ranking (9), they and Hatch gave four SEC teams their highest ranking. 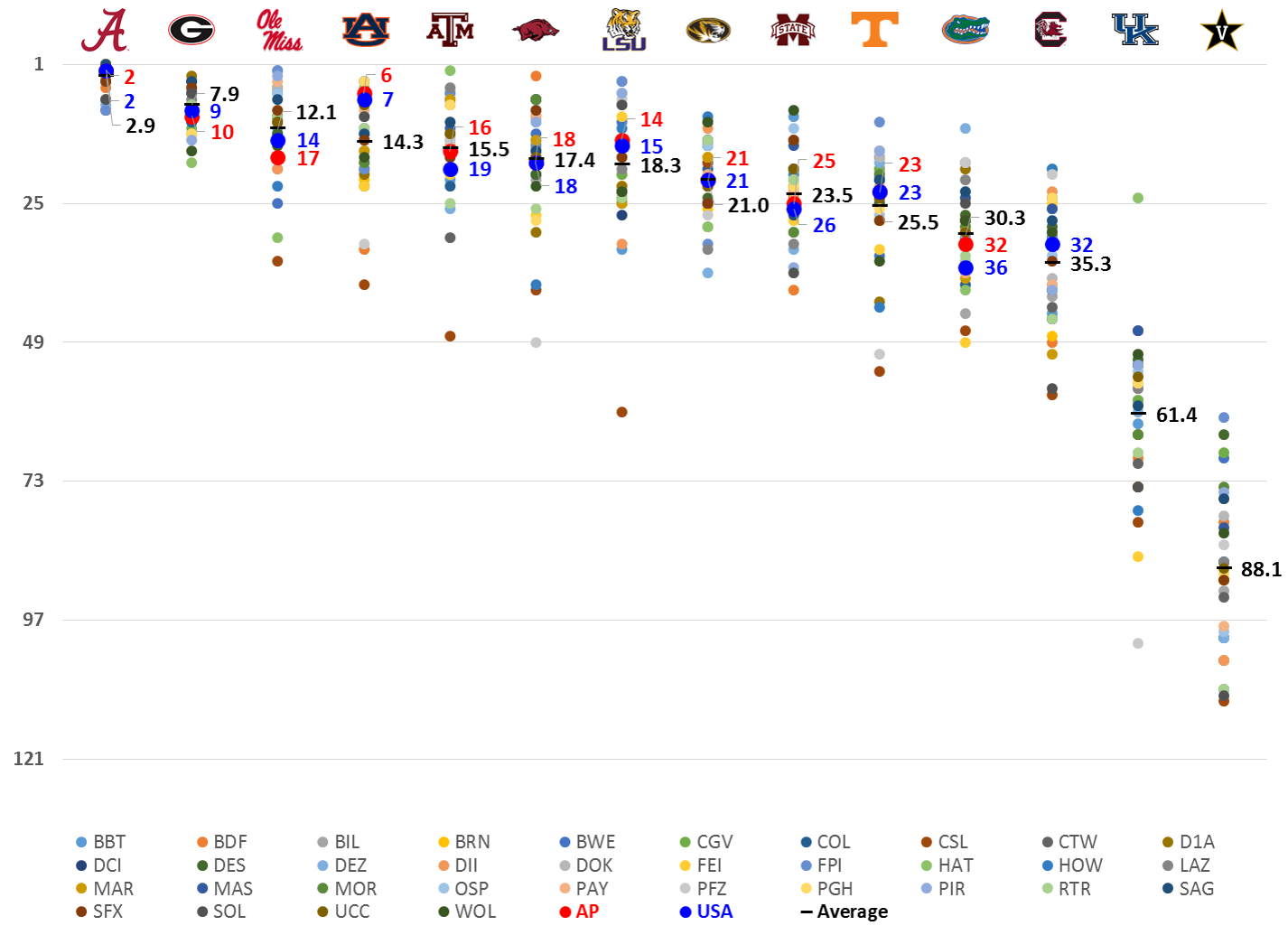