A Salute to the 2015 Alabama Seniors: Kenyan Drake

Share All sharing options for: A Salute to the 2015 Alabama Seniors: Kenyan Drake

"They said the really good players can play numerous positions. Hopefully, they see me as a good player, but I want to become a great player."

As we reflect on what ultimately became a magical season for the Tide, we look back four years to the recruiting class that spawned so many of these graduating seniors, a class that filled in the gaps on one national title winner and provided the foundation of another in 2015. Kenyan Drake was a member of that 2012 class, a four-star all-purpose back out of Hillgrove High School in Powder Springs, Georgia. While somewhat overshadowed that year by a litany of five-star recruits — most notably by current Jacksonville Jaguar T.J. Yeldon — Drake had one heck of a high school career, punctuated by a senior campaign that, in a healthy bit of foreshadowing, saw him contribute all over the field: 1610 yards on the ground, 315 yards through the air, and 25 total touchdowns, including two that came on kickoff returns. That effort was good enough to be named the Gatorade Player of the Year for Georgia, as well as a slew of regional all-star awards — in yet another nod to his versatility, the speedy Drake even picked up the state 100m title at Georgia’s AAAAA level.

Despite the multifaceted nature of his high school play, Drake’s initial role at the Capstone was as the cleanup back for one of the more monstrous rushing attacks in recent memory, as the 6’, 180 pounder with the 4.4 speed was only seen picking over the leftovers of the aforementioned Yeldon and current Green Bay Packer Eddie Lacy. As you might expect, his opportunities arose largely during garbage time, as all of his carries came in games that the Tide won by 27 points or more. Even in that environment, however, he provided tantalizing glimpses of potential, as initially it seemed like Drake could do nothing but score — he found the endzone on five of his first 29 carries, an absurd touchdown rate that was obviously unsustainable but an absolute blast to watch. Paired with Yeldon, the first (and only) true freshman in school history to gain 1000 rushing yards in a season, the running back assembly line that produced Lacy, Trent Richardson, current New Orleans Saint Mark Ingram, and Glen Coffee seemed primed to spin out at least two more NFL players at the position.

2013 would prove to be a particularly frustrating year for the Tide, and perhaps no one from that offense was more frustrating than Drake. The explosiveness was on full display, as his ascendance to the change-of-pace backup role resulted in 694 yards on just 92 carries, a whopping 7.5 yards per carry average that easily outpaced the 6 put up by Yeldon on twice as many carries. The crazy touchdown production carried over from 2012 as well, as Drake turned seven of his first 49 carries that year into points. Most important, however, was his development in other roles — in addition to backup duties at running back, Drake would start to see work as a receiver and provided some impact on special teams, most memorably a blocked punt against Colorado State that would be returned for a touchdown by fellow sophomore Dillon Lee. Unfortunately, all of this was marred by a much-publicized fumbling issue, as Drake was one of the conference’s worst fumblers that season, with Yeldon adding several backbreaking turnovers of his own. This was such an issue that, despite numerous strides in protecting the ball and two largely turnover-free seasons later, it was still kicking around the back of the mind during Drake’s eight touches in the national title game.

”Potential” was once again the operative word for Drake in 2014, although in this case the connotation would be significantly more negative. The departure of offensive coordinator Doug Nussmeier in the offseason begat the splashy and somewhat controversial hire of Lane Kiffin, which portended big things for Drake. Kiffin, of course, was best known as the co-architect of one of the flashier offensive attacks in the BCS area at USC, one that was driven by a slightly undersized but devilishly quick back who made highlight-reel plays all over the field in Reggie Bush. That’s exactly what looked to be happening with Drake, as he once again piled up touchdowns at an alarming rate with six in his first 27 touches of the season. He started to show signs of gamebreaking ability in the passing game as well, punctuated by a game-opening 87 yard touchdown against Florida — one that remains a GIF of choice for whenever the Bejorted Ones have the misfortune of playing the Tide:

Sadly, two weeks later the season would take a nasty turn for Drake and the Tide, as his first touch on the road against Ole Miss resulted in a first down, but also a broken left leg and the end of a promising junior season. The Tide would ultimately lose that contest, and while the team eventually made the inaugural college football playoff, the lack of a third playmaker aside from Yeldon and Heisman finalist/receiving god Amari Cooper was felt strongly at times during the year.

The leg was fully healed by the start of 2015, but while Yeldon’s departure freed up the lead running back slot, the ascendance of eventual Heisman winner Derrick Henry relegated Drake to backup duty once again. After a strong start against Wisconsin and MTSU, Drake’s production began to wane, as he appeared to be trying to do too much with every carry in lieu of taking what the defense gave him — almost as if the comparisons to Bush and his reputation as a home-run threat began to work against him. He briefly returned to form with an outstanding game against LSU, but again faded behind the absurdity that was Henry and the emerging Calvin Ridley. Unfortunately, Drake’s season looked to be in jeopardy from injury once again, as he broke his arm making a tackle on special teams against Mississippi State, costing him the final two games of the regular season.

Drake would return to a very light workload against Florida in the SEC title game, but it was unclear what to expect from him in the Playoff. While Michigan State successfully blunted Henry’s impact, they let Drake get loose once, and his 58 yard scamper turned out to be the longest play of the day for the Tide offense in a 38-0 drubbing of the Big Ten champs. Little did anyone know that his biggest play of the season was yet to come, and in perhaps the most unlikely of ways.

You see, kick returns were, shall we say, awful for the Tide in 2015, as they entered the Playoff ranked 125th in the country in FEI’s Kick Return Efficiency metric. Drake faded in and out of the primary kick returner role during the season, as he was inexplicably supplanted by Damien Harris just in time for the meat of the Tide’s schedule in October. After a forgettable three-game stretch, Drake retook the role in time for the Third Saturday in October, doing decent work until the aforementioned injury ended his regular season. Those last few games were a microcosm of Drake’s career to this point — ample promise but little true payoff, as Drake continually came up just shy of breaking the big one.

That all changed with about 7:30 left in the fourth quarter of a tight, back-and-forth national championship game against Clemson. The Tide had already stolen a possession a few minutes before, breaking a 24-all tie with the Tigers via a surprise on-side kick and long bomb to secret weapon O.J. Howard. Clemson, on the backs of Deshaun Watson and Wayne Gallman, promptly drove 61 yards and converted a field goal to draw within four. They then elected to kick to Drake, which turned out to be a grievous error in judgement:

14 seconds was all it took for Drake to run around and past the moribund Clemson kick coverage unit, as great blocking by the Tide return team and one juke of Cordrea Tankersley — #25 in the video above, and the only Tiger with any real shot of stopping this return — opened up a 95 yard path to immortality. It required every ounce of Drake’s considerable athleticism to get there as well, as evidenced by this awesome shot from the pylon cam:

This would end up being Drake’s final touch in a Tide uniform, and fittingly it was the biggest play of his career. No single play ever wins a game, of course — this touchdown would possibly been for naught without the on-side kick, for instance — but if you’d like to say Drake brought home a sixteenth national title for the Tide with this return, go right ahead. It’s the most likely candidate from the game for a future Daniel Moore print, at least — who wouldn’t want this hanging on their wall? 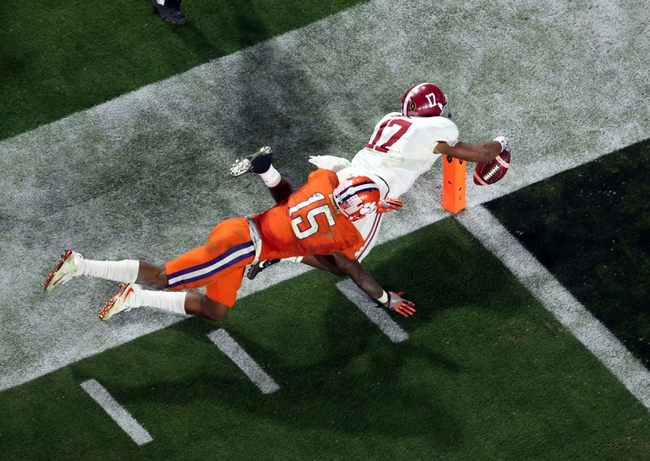 Tomorrow brings one final game for Drake to showcase his myriad of skills for the NFL scouts, as he joins four other Tide seniors in the 2016 Senior Bowl. Currently carrying a third-round grade as a running back, it is a virtual lock that Drake will get picked up, given the multitude of ways he can impact games. It took every last touch he got to get there, but Drake ended up being that great player he talked about becoming four years ago, affecting the game from a variety of positions just like the coaching staff said he could — not to mention picking up a degree on the way out the door. One lucky NFL team will draft an elite, coachable athlete who persevered through all manner of adversity to make it to the league, helped bring home two national titles along the way, and provided one of those indelible moments Tide fans will talk about for decades to come. And for that, Kenyan Drake, we salute you.