The 1979 team lost their star quarterback and running back plus three big legends from the defense and still repeated. Could it happen again?

Share All sharing options for: 79 Days 'Til Kickoff: The 1979 Alabama Football Season

To many long time Alabama fans, the 1979 squad holds a special place in their hearts. It was Bear Bryant's last National Championship - the second of two in a row - and the Crimson Tide's last undefeated team until Gene Stallings won it all 13 years later. Much like that 1992 team and Nick Saban's four National title teams in the past seven seasons, the '79 team relied on stingy smashmouth defense and running the dang ball.

While this team was coming off a memorable Sugar Bowl win and a National title, they lost a lot of talent. Bryant was charged with the task of replacing the likes of QB Jeff Rutledge, RB Tony Nathan, LB Barry Krauss, LB Rich Wingo, and All-American DT Marty Lyons. The Tide entered the season as the #2 ranked team.

* Rutledge may best be remembered for chasing down an ***hole Auburn fan who snatched Bryant's famous houndstooth hat after the 1971 Iron Bowl.

As you can see by the scores below, it was a rare occasion when the Tide was scored on. This Bama team recorded five shutouts and had 10 games in which they gave up single-digit points. Auburn had the most success with 18 points, followed by Tennessee with 17. Opponents scored 67 points for the entire season. They gave up only 106 first downs (8.8 per game) and 108.0 yards per game. They also notched 25 interceptions and 56 passes broken up on the season.

The wishbone attack was led by rotating QBs Steadman Shealy and Don Jacobs. Steve Whitman and Major Ogilvie were the top running backs, although Shealy was the top rusher for the season (111-944, 11 TD). As a team, they ran for 3,791 yards with 38 TDs. The passing game was spotty at best. As a team, they managed 66 receptions for 923 yards, 6 TD, 7 INT. The offensive line was led by All-Americans Jim Bunch and Dwight Stephenson.

Despite their prolific rushing game, this team was plagued by fumbling. The Tide put the ball on the turf an unbelievable 41 times, losing 19. In 2015, no FBS team had that many fumbles and only Middle Tennessee lost that many. The fact that this Alabama team succeeded as it did is a true testament to the defense.

In five games of pure domination, the Crimson Tide outscored their opponents 219-9. Florida gained only 66 total yards to Bama's 454.

Johnny Majors' 18th ranked Tennessee team put a scare in Bama by running up a 17-0 score before Alabama clamped down and registered the next 24 unanswered points. The Tide had troubles with the hanging onto the ball, fumbling seven times and losing four. Major Ogilvie ran for 109 yards on 13 carries.

Bama won this handily but fumbled six, losing two. Shealy had 13 rushes for 92 yards and a pair of touchdowns.

This game was tied 7-7 at the half. The Tide again had trouble protecting the ball, fumbling four times but recovering all four. As the more steady of the two quarterbacks, Shealy would establish himself as the starter by running 20 times for 190 yards and a score.

Heavy rains in Baton Rouge led to sloppy field conditions for both sides. Alan McElroy’s 27-yard field goal in the third quarter represented the only points of the game. The Tide defense held LSU to 164 total yards and nine first downs in the win.

Howard Schnellenberger played under Bryant at Kentucky and was his OC at Bama from 1961–1965. As a first-time head coach, he brought his 'Canes to Tuscaloosa with a pro-style pass-oriented offense but was shut down. Freshman QB Jim Kelly had a woeful day completing 2 of 15 with 10 yards and 3 INT. Kelly was relieved by Mike Rodrigue who had two interceptions of his own

[SIDE NOTE: This was a live nationally televised game on ABC, the first ever in Bryant-Denny Stadium. Al Michaels did the play-by-play. The game was selected as an ABC regional telecast after Miami upset Penn State the previous week. Despite the shellacking, the game gave Miami some exposure and they would win the National Championship four seasons later.] 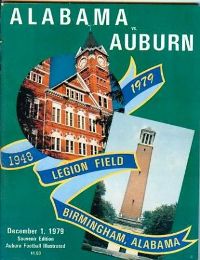 The #14 Tigers had visions of ruining Alabama's perfect season. They trailed 14-3 at the half but came back to take an 18-17 fourth quarter lead thanks to four lost fumbles by Alabama. Shealy led Bama on a late drive that concluded in an 8 yard scoring run and a two point conversion, both by Shealy to win the game.

Auburn running backs Joe Cribbs (16-93) and James Brooks (18-55) both had a good game but both were denied rushing scores. Shealy had 99 yards on the ground with two TDs and the two-pointer. He also passed for a score.

Despite the Iron Bowl win, Alabama fell to No. 2 in the polls. Ohio State ascended to the top ranking on the heels of defeating #13 Michigan. (FWIW, the OSU-Mich game was aired on ABC. The Iron Bowl was not on TV. Undue influence?.)

Alabama capped the perfect season with a 24-9 win over Lou Holtz's Razorbacks in the Sugar Bowl, giving Bryant his sixth national title at the Capstone. Billy Jackson, Major Ogilvie, and Steve Whitman combined for 224 of the Tide’s rushing offense and all three scores. Jackson led all rushers with 120 yards on 13 carries, while Ogilvie added 14 rushes for 67 yards and two touchdowns. Whitman had six carries for 37 yards, including a game-clinching 12-yard TD run in the fourth quarter.

Meanwhile, top-ranked Ohio State suffered a 17-16 loss to Southern Cal in the Rose Bowl, leaving the Tide with the only undefeated record and the undisputed national championship. The Trojans, who had tied Stanford in October, finished second in the polls.

Bear Bryant installed the wishbone at Alabama early in 1970 and perfected it by the end of that decade. However, the passing game was the offense of the future. Coaches like BYU's LaVell Edwards introduced pass-happy aerial attacks and quarterbacks like Kelly, Dan Marino, and John Elway would soon change the game.

Bryant's final teams had some respectable seasons (10–2 , 9–2–1 , 8–4) but you have to wonder if Bear had the energy to again reinvent his team. This would mean installing a whole new offense, while completely changing the scouting and recruiting strategies.

WHERE ARE THEY NOW?

Don McNeal had a great NFL career with the Miami Dolphins (1980–1989). Today he is battling Multiple Sclerosis.

Tommy Wilcox, a fan favorite who has gone on to a successful career as a host of a hunting and fishing show entitled "Tommy Wilcox Outdoors."

E. J. Junior played thirteen seasons in the NFL, twice named to the Pro Bowl as a Cardinal, and was recently nominated for the College Football Hall of Fame.

Major Ogilvie an All-SEC First Team selection and Academic All-American honor in 1979, he was also selected as the Most Valuable Player in both the 1980 Sugar Bowl and 1981 Cotton Bowl. He was Captain of the 1980 team and holds the distinction of being named to the All-Decade Team for both the 1970s and 1980s. He was inducted into the Alabama Sports Hall of Fame in 2014.

Dwight Stephenson played 8 seasons with the Dolphins, five of which were All-Pro seasons. He was named Walter Payton Man of the Year in 1985 and elected to the Pro Football Hall of Fame in 1998. He is considered one of the greatest centers of all time.