More than a month removed from the last football game that mattered to most fans of a Crimson-persuasion, we settle into the doldrums of the #offseason. For many, focus shifts from football (crootin' notwithstanding), to the latter half of the winter sports slate. With the bouncy hoops teams promising to finish with another head-shaking effort, it's the potential juggernaut that is softball, along with an improving baseball team, to carry us into the spring.

But what of those other "non-revs" proudly donning the Crimson & White in shorts, without shoulder pads? Were you aware that Bama has a Track and Field team, and that they're pretty darn good? Judging by the lack of social media presence and your responses to my T&F posts on RBR, I think I know the answer... 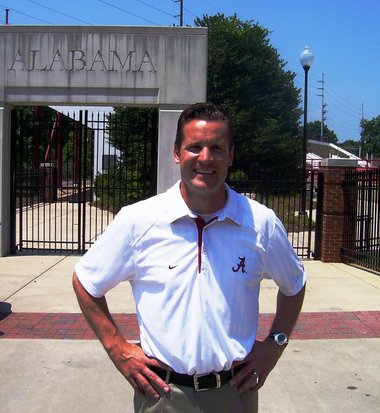 FUN FACT! Yours truly and Coach Waters competed at the same track meet many years ago

Coach Dan Waters helms both the Women's and Men's T&F and Cross Country teams. If you're counting at home, that's about a 100-strong combined roster. But it's the diversity of that roster that should pique your interest, and shows why Waters has been voted the best T&F recruiter in the country (yes, an actual thing).

This is an international roster, which has become the norm for T&F programs. Most will know the distance prowess of the African nations, the Scandinavian throwers with 17 vowels in their names, and, of course, sprinters from equatorial island nations, such as the Grenadian Golden Boy, who found himself over 2,000 miles + 400 meters from home in Tuscaloosa.The current program includes athletes from Germany, Kenya, Canada, even...California.

In the near-decade of leading the Tide TFXC, Waters, and his programs, have earned multiple accolades, including SEC Coach of the Year and USTFCCCA Program of the Year. Their recent successes, such as 2018 Men's SEC Indoor Championship, and nearly 1/2 of the all-time T&F records occurring since Waters took over in 2011, has been the most prolific run (pun) for Tide Track since the mid-80s. 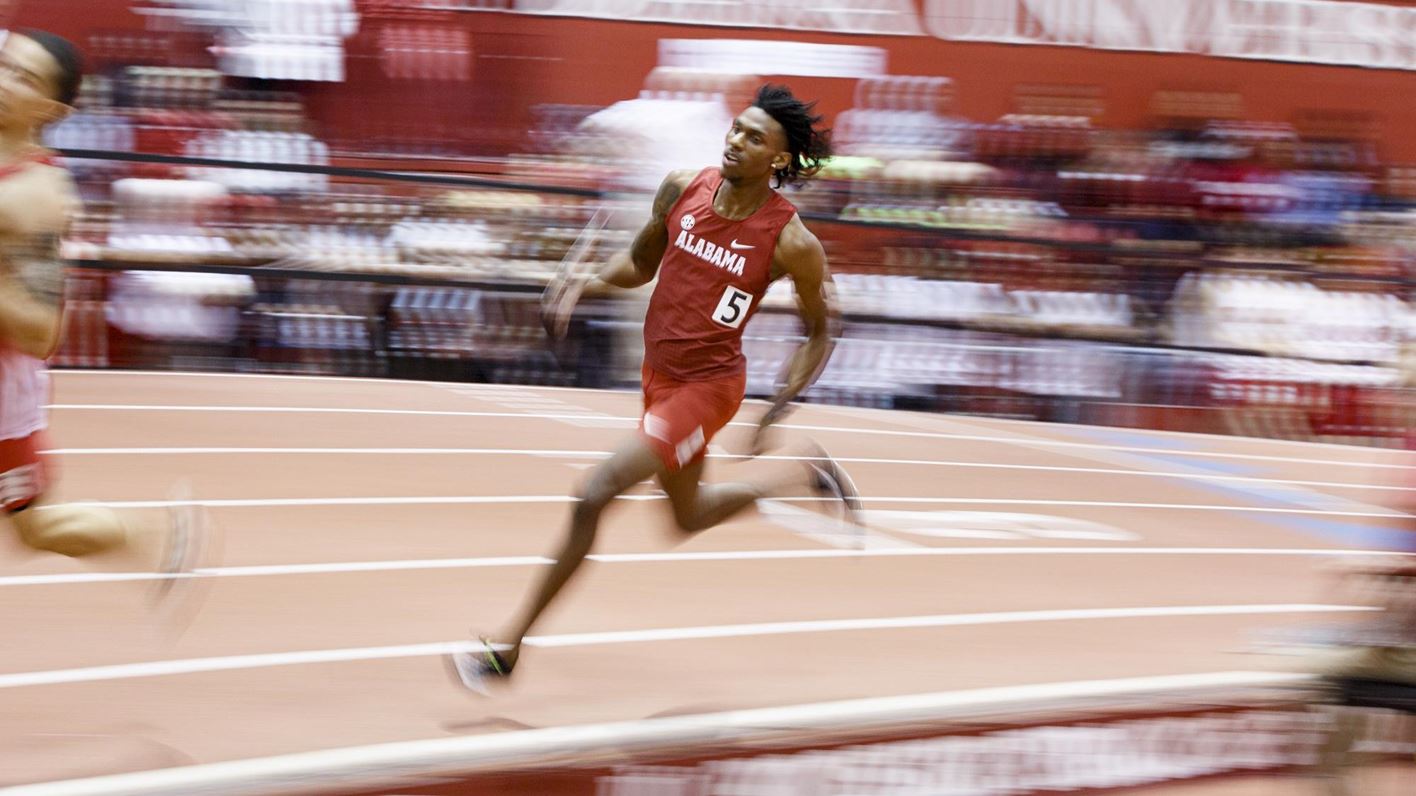 When combined with the cross country season, track is nearly a year-round sport. Mid-year events such as IAAF, World Championship and Olympics fill most summers, and the harriers do their distance in the fall. January and February are indoor season, traditionally, so, some "Icebreaker" meets have already taken place.

Bama has been busy most weekends since the calendar struck 2020. Meets in-state at UAB and Samford, were followed with specialty venues such as the Indiana Relays. Tide Track had a great showing in New Mexico this weekend, and will have the first big split next weekend, with the team doing the "trifurcation" trip between Vandy, Texas Tech, and Iowa State.

Unless you're a die hard track fan (not everyone can be that blessed), and pay for an obscure (and expensive) viewing package, you'll only have the occasional opportunity to catch Tide Track on TV. The first will likely be the SEC Indoor Championships. College Station plays host this year on FEB 28/29, and they usually do a very commendable job. Stay tuned once the weather turns for the outdoor season and the big name meets such as the Prefontaine, Texas/ Penn/ Mt. SAC Relays, and of course, the SEC Outdoor and NCAA Championships. Those are usually all televised, or aired shortly after. 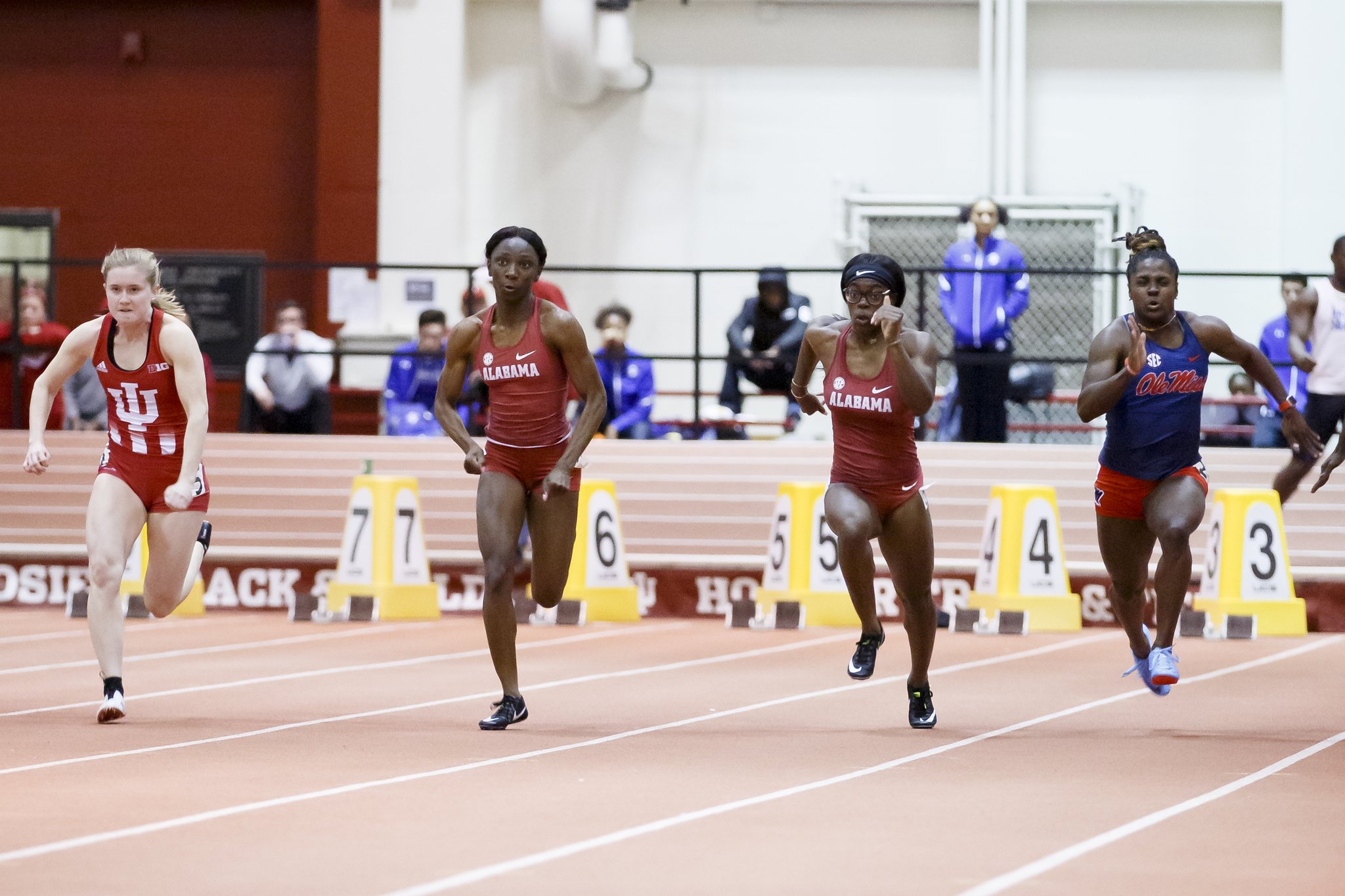 Tamara Clark would beat you in a race...while running backwards...and giving you a 10 second head start

The most watched events in T&F. Most meets close with the 4X400, and the 100M made Jesse Owens, Carl Lewis, Flo Jo, and Usain Bolt legends. Real estate confines the indoor venues this time of year, so the 60m replaces the 100, and you won't find many of the long-hurdles on embanked, wooden tracks.

Bama has been very well-represented in the sprints by the ladies. Juniors Tamara Clark and Daija Lampkin are speed demons. They have more All-American Event titles then their races have seconds. Clark holds the school record in the 100m, going almost 11-flat, and ran one of the fastest collegiate times in the nation at 60m already this season. Combined with veteran Takyera Robertson, these ladies have their name plastered over the record books for both relays. Will be interesting to see what combo Coach Waters uses this year, as the relays should consistently net us points.

The Men haven't fared as well in the sprints recently. Keitavious Walter gave us two glorious and fast years, with his PR of 9.9. I don't see anybody on the roster currently with that speed. The long sprints show promise, and there is some young, fast blood on campus to watch for including Joshua St. Clair, who was a teammate of former long- sprinter Jereem Richards on the Trinidad & Tobago U20 club.

Senior Alize Ford is the only upperclassman with hurdles next to his name on the roster. Recently departed, school-record holder Reubin Walters will be be a difficult to replace on the men's side, as will Vanessa Clerveaux for the women. Hurdles is an event that takes some conditioning, both mental and physical, to truly succeed in. Will be interesting to see if the current "youngins" on the roster, such as walk-on Lea Duben and Dane Palazzo, who was the Colorado State Champ in the 300IH. 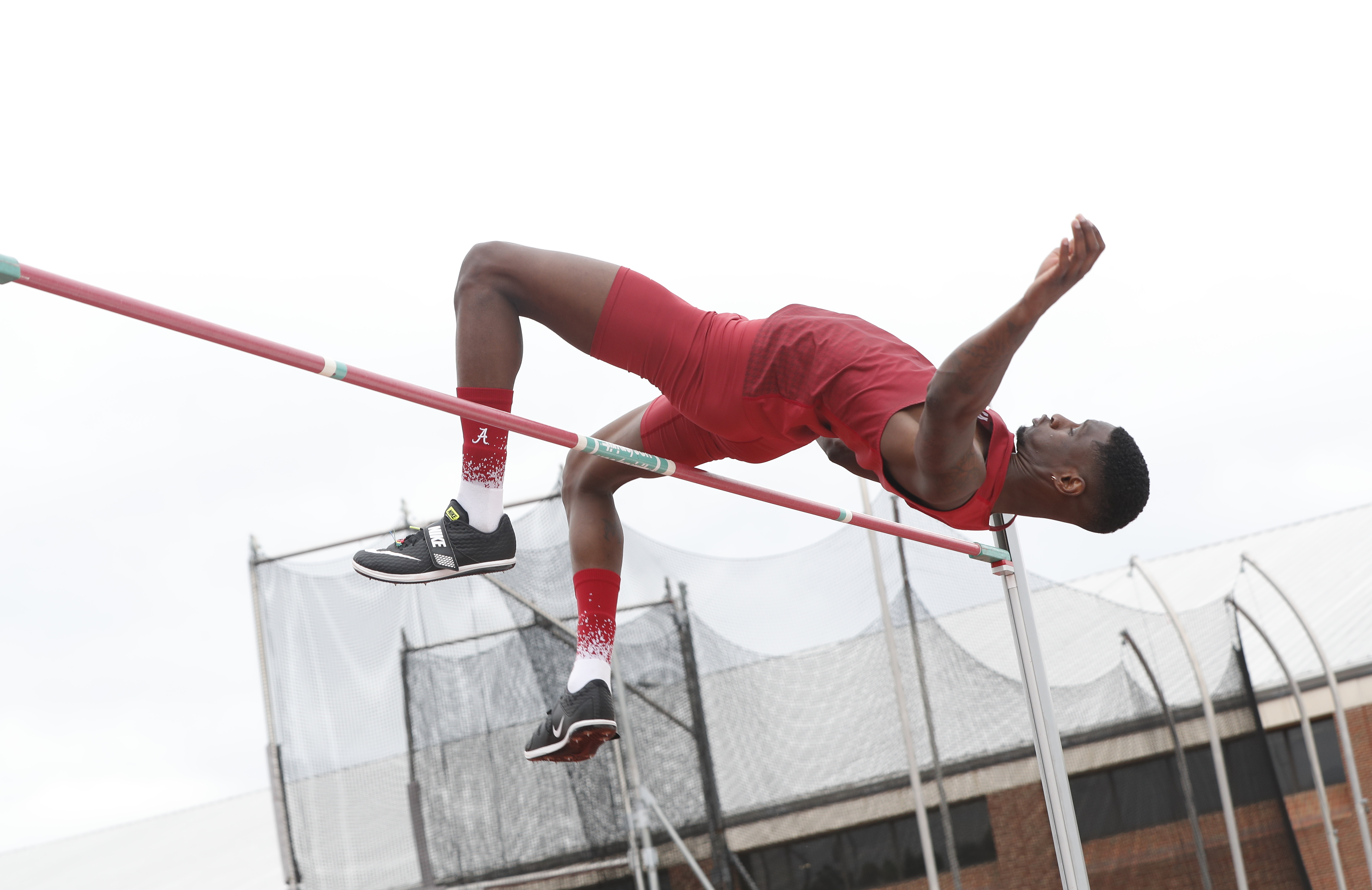 Natural highs are the best highs

There, I said it, now I can turn my focus into moving toward acceptance. McEwen and his world-class leaping ability will be missed, as will the consistent points he brought with it.

Triple Jump specialist Christian Edwards may have the skills to try and replicate McEwen's productivity and points. Edwards has a PR of 53' 8.5" and usually surpasses the 50 foot mark. That will get you atop a lot of medal stands at this level.

Abigail Kwarteng's road to Tuscaloosa started in Ghana and passed through West Texas, but we're glad to have the senior and her 6' High Jump here. Her 5' 11" leap at the NCAA's last year, left her just out of the medals at 4th. 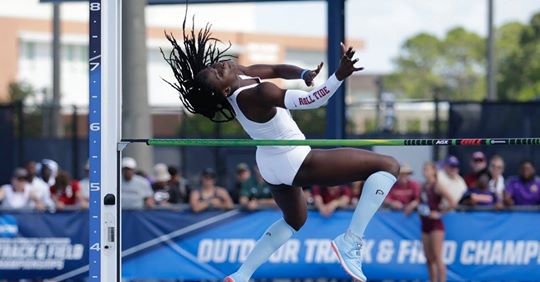 Admit it. That's a dope photo

There are several pole vaulters on the roster. None as effective as Lakan Taylor from a few years ago. Several lady vaulters have PRs of around 13'. If they can continue to consistently hit there, way may see some points in meets throughout the year.

The men are led by Ryan Lipe. The Indiana product was a multi-state champ at over 17', and already has his PR of 17' 7" at the NM invite this w/e. The SEC looks to be short on top vaulters this year, so Lipe can net us some points with 17 footers this year. He'll need to top 18 for a chance at nationals, though. There's the Vestavia Vaulter ( I just made that up) Henry Barret. With a PR of over 16', he has shown improvement every year in T-town. Frosh walk-on Nolan Bone looks to be the next PV of note for the Tide, with a prep mark of almost 16', he should continue to develop into one the SEC's best in the next few years. 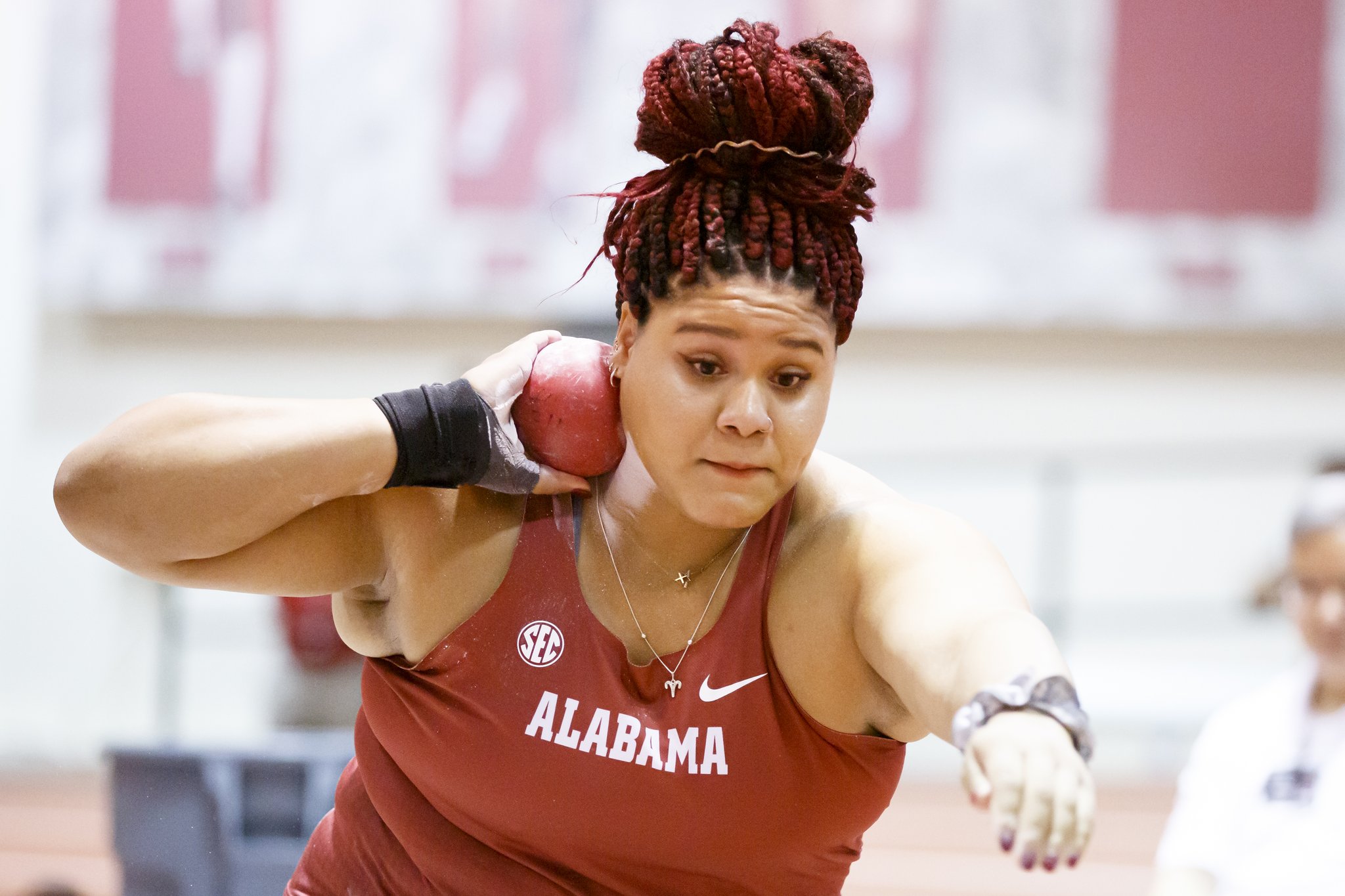 There are 14 throwers listed on the current roster, and not a single senior among them. That should give you hope for this group, as Bama has been a putting (another pun) out some quality throwers recently.

Bobby Colantonio Jr is from R.I. (not an ACTUAL island) and can hurl implements across its full expanse. The spinning sophomore made some noise (once again, another pun) in the throwing world last year, making several AA lists. He JUST set an Alabama record for the weight throw, with a heave of over 77', besting the previous record by almost 2 feet. He may be the next Alabama NCAA Champ.

Portious Warren finished last year, and her Bama career just 1.5 inches shy of gold in the SP. She'll be remembered fondly and regularly with her name writ in Crimson Flame... and the records books. Nickolette Dunbar is one of many young throwers to shoulder (I can't stop these) the load, and is already placing high at meets and working her way into the record books. Taylor Gorum, Samantha Kunza, Cherisse Murray, Karmen Williams, Chago Basso, and Ashton Domingue are all names to watch and have been prep or JUCO champs or record holders prior to Tuscaloosa. 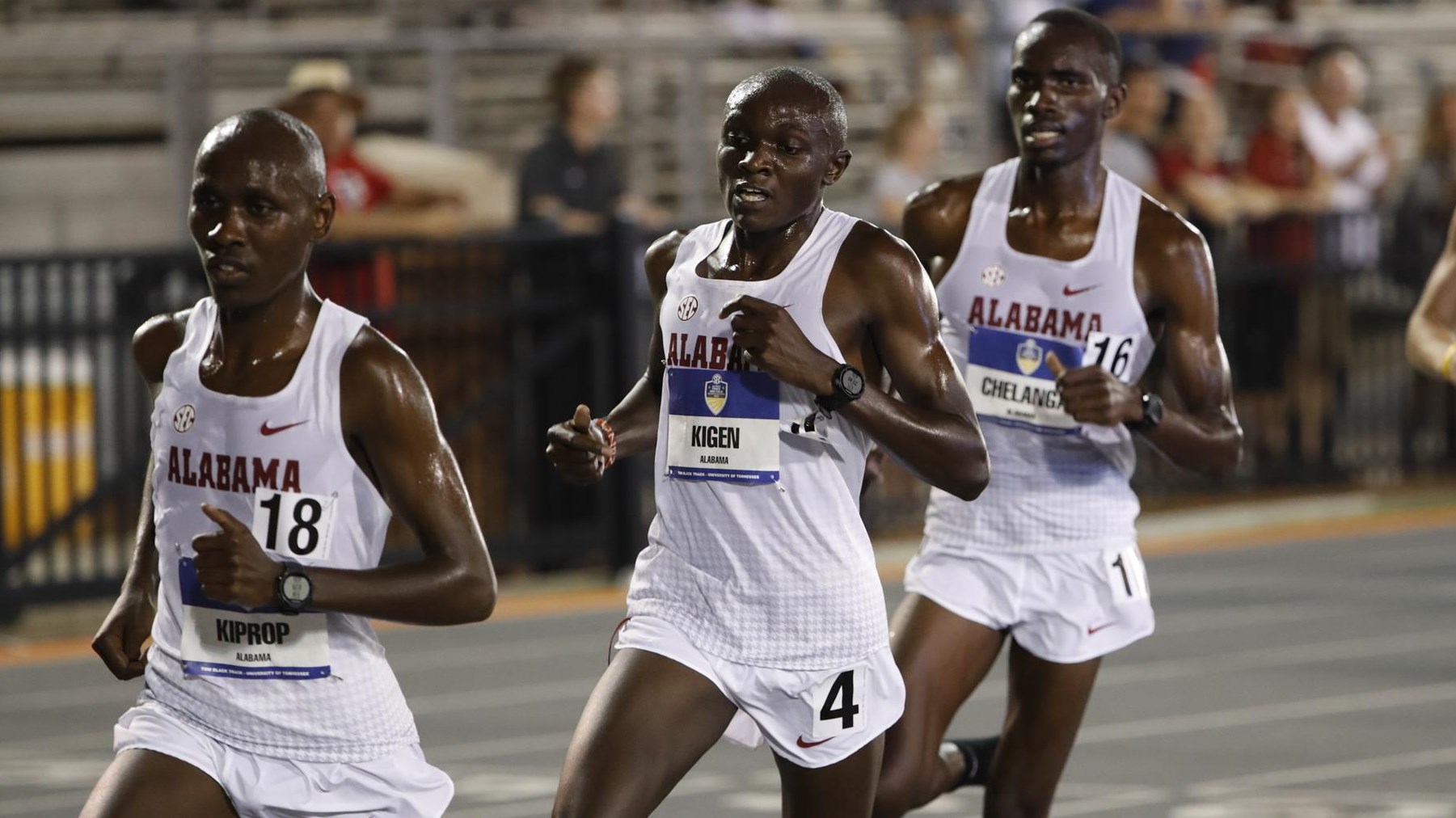 The Crimson Kenyans™ have seemingly represented Alabama since Wallace Wade recruited Ben Davis. I believe I developed carpal tunnel syndrome while scanning through the above trio's records, trying to count how many times they are listed.

Though Alfred Chelanga has moved on, Kiprop and Kigen haven't shown any drop-off, with Top 10 finishes, and a few overalls in last year's XC season.

Recent signings show that Coach Waters values his Kenyan runners. There are currently 7 Kenyans on the roster, so, if recent history is any predictor of future success...

Women's distance hasn't been as dominant, but keep an eye on Amaris Tyynismaa. The Montgomery product has a compelling personal story, and was a distance force in HS.

Alabama hasn't had a high-performing multi-eventer since Stacey Destin. A handful of faces are listed for the ME on the roster, so I'll update if somebody shows promise.

Both teams are ranked 19th nationally in the USTFCCCA poll. Great considering, but know that the SEC makes up the bulk of the top teams for both men and women.