Note: I have added tables of the penalties for added context.

Looking at the raw penalty numbers, it is hard to to see the signal under the noise. krnxprs had a great suggestion on a layout and I think the following implements it. One thing that isn't in the data are the penalties not called. Well really the egregious missed penalties since there are always penalties that could be called and aren't. Another data point that I don't think gets recorded is penalties that are called, but declined. You will have to determine the amount of sodium you wish to ingest as you read what follows.

I added the mean for the SEC (dashed line) and the mean +/- the SEC standard deviation (dot-dash line). Also this dataset includes the SECCG data.

This first graph is the average by game for each team. Well, we aren't the most penalized SEC team. That is Ole Miss' honor. We are above the SEC average (6.342) at 7.333 though. What stood out to me was LSU being below average (in average penalties) and only Kentucky had a lower average. 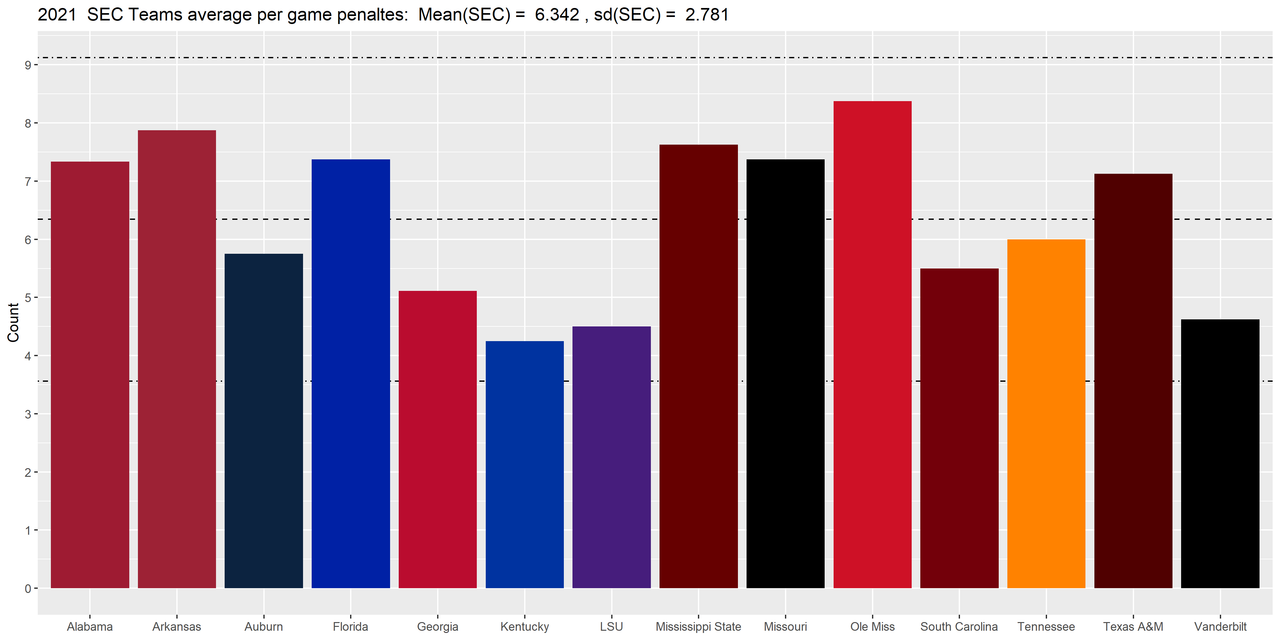 Next I figured that I would divide the games by home vs away (and one neutral site). Let's look at the away games first. Three of our away games had an above average number of penalties: Florida, Texas A&M, and Auburn. Mississippi State was the lone away game with a below average number of penalties (despite their infernal bells). I'd imagine crowd noise had an effect, but without knowing what penalties were called its hard to make a definitive statement on that. Eventaully I hope to be able to pull the penalties and the penalty types out of the dataset and maybe then it will be possible to gauge the effect of crowd noise... somewhat. I was surprised that we weren't that far above average against Texas A&M. 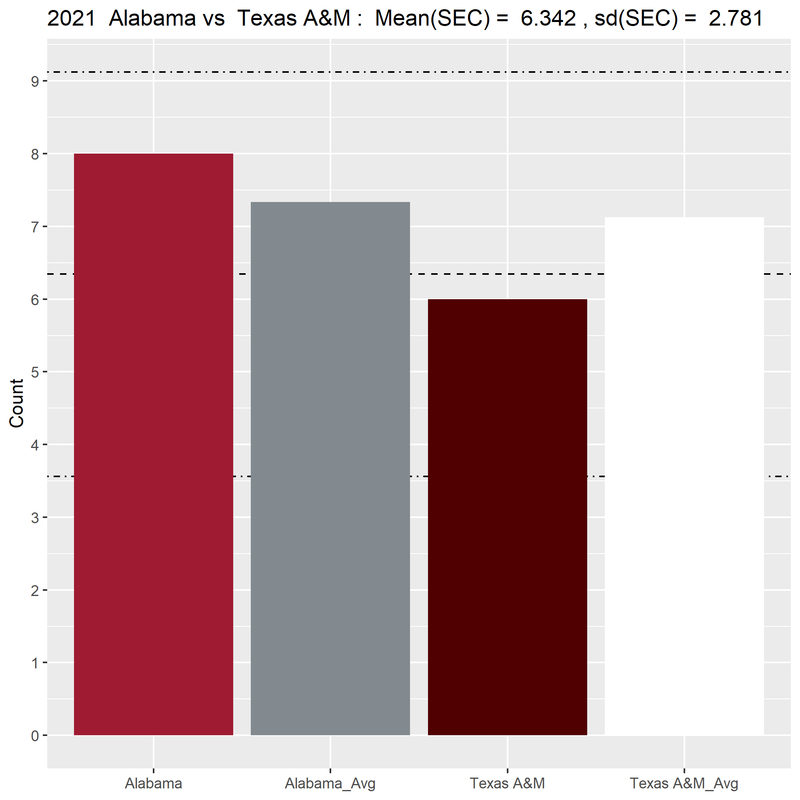 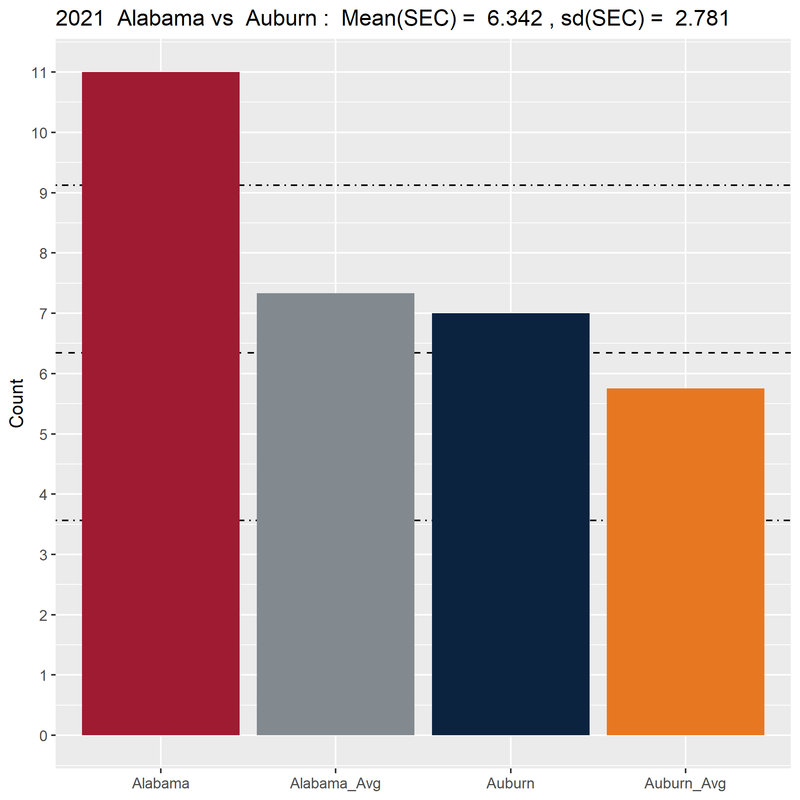 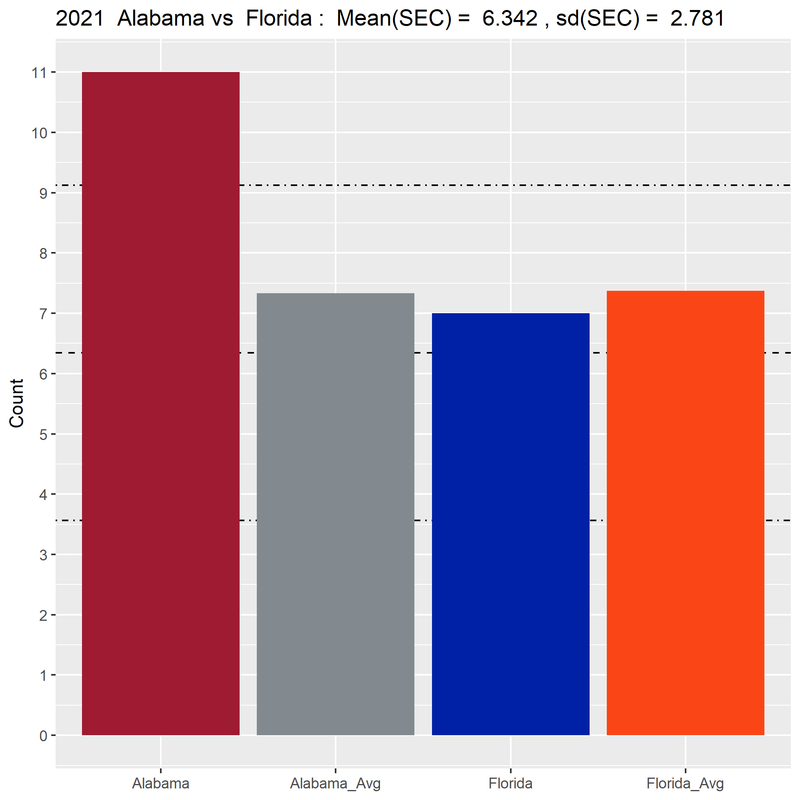 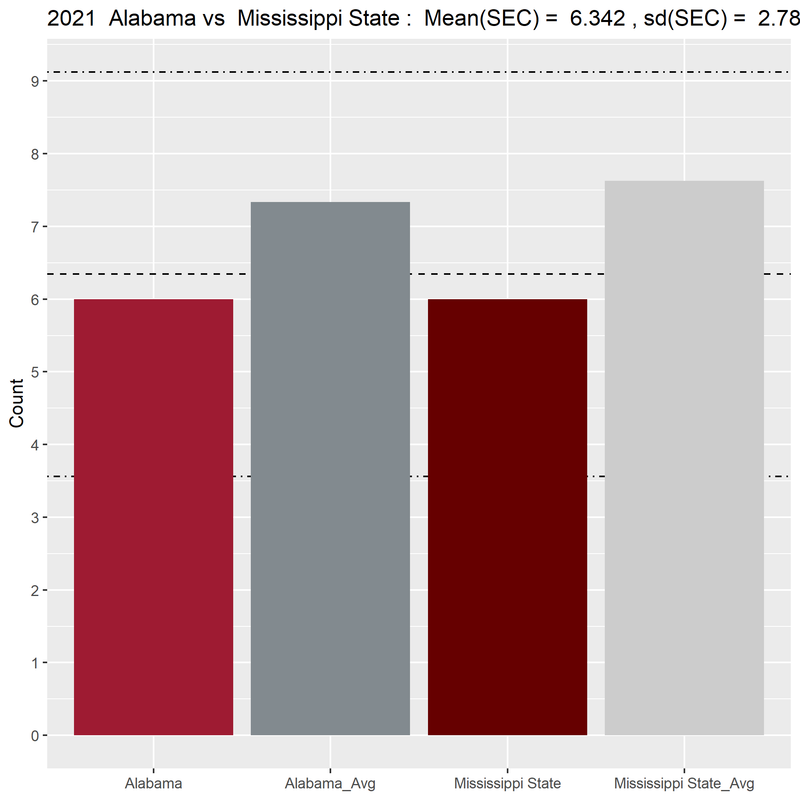 The results were reversed for the home games. We were below average against three of our home opponents: Arkanasas, Ole Miss, and Tennessee. Versus LSU we were above our season average, but so were they. And both teams were above their averages by about the same amount. So I guess I'd call that a wash. 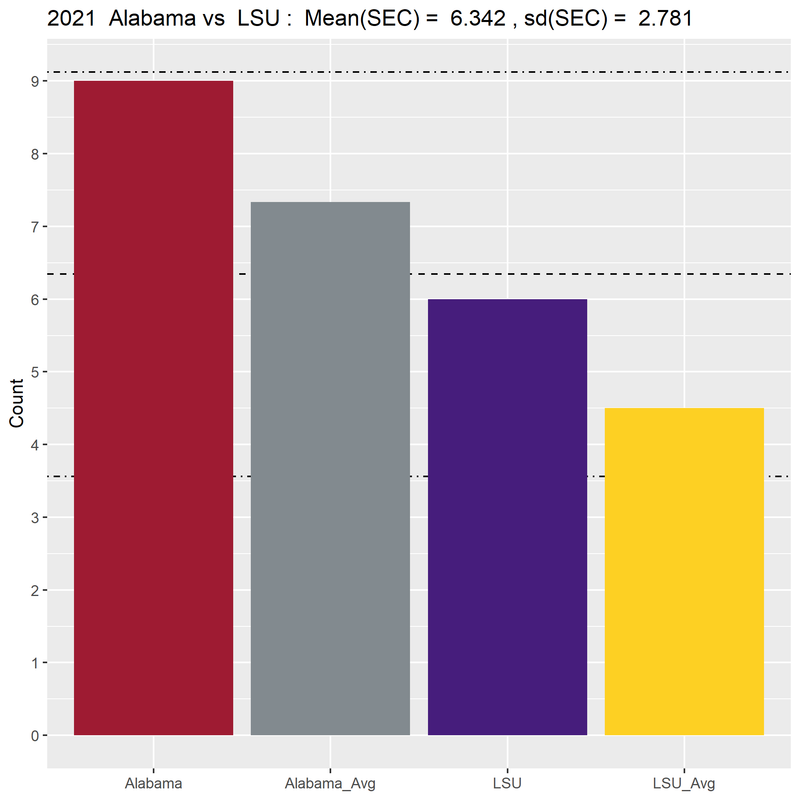 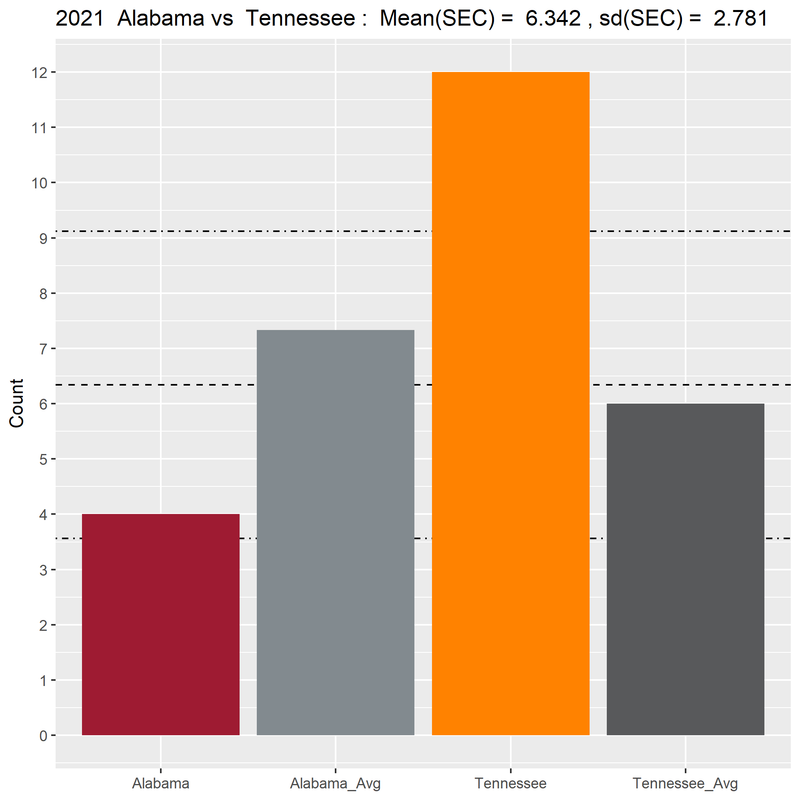 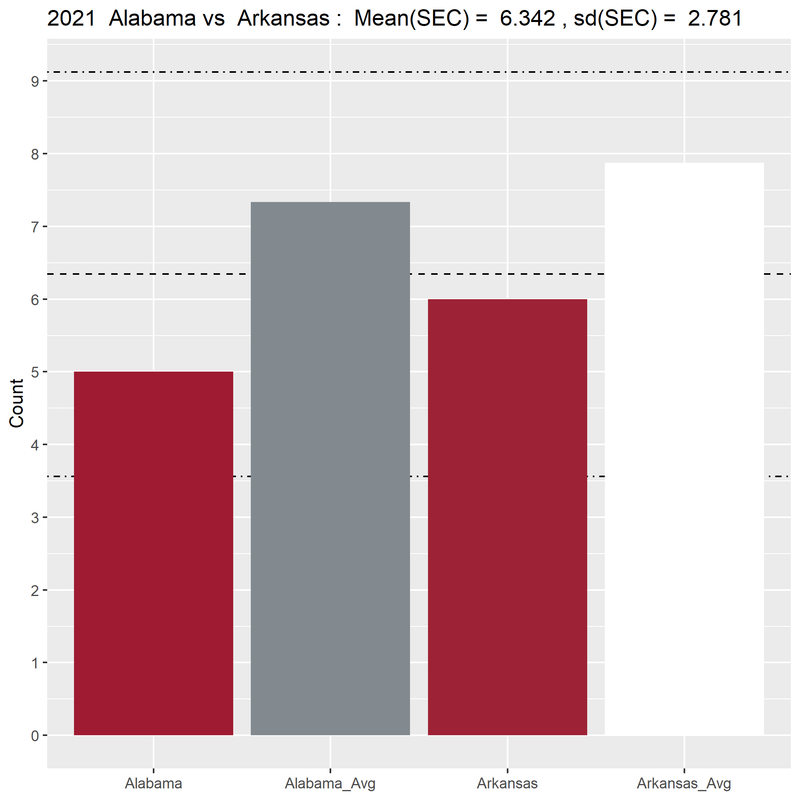 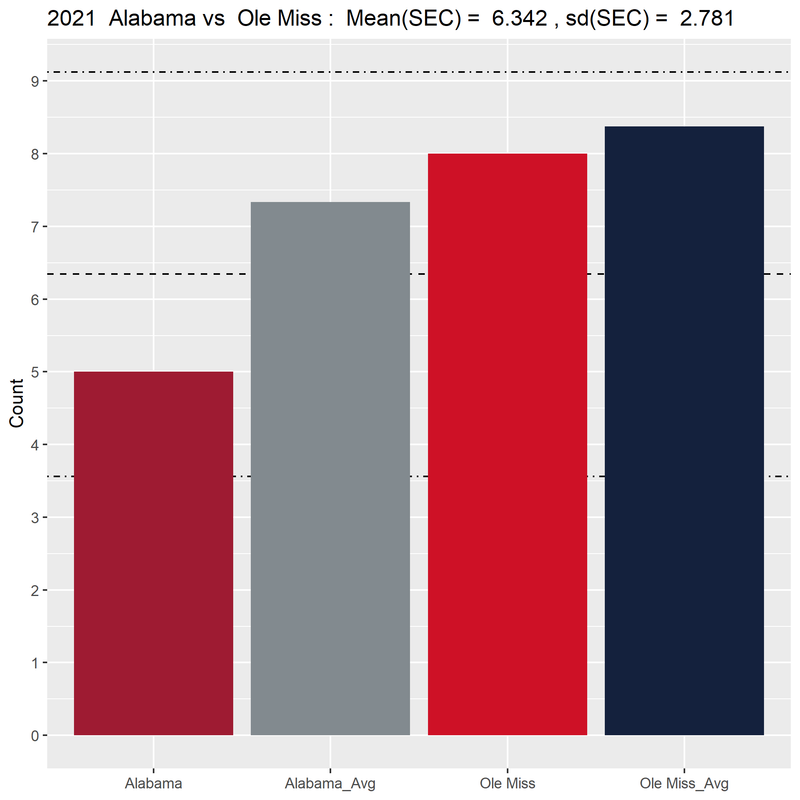 There is not much to say here. We were below average and they were above average, but we were still called for one more penalty than they were.

Given the data we can't claim that we always get penalized more than the other SEC teams. On the other hand, keeping in mind the caveats at the start of this piece (uncalled penalties, declined penalties) it is possible that reality is closer to our subjective feelings. Data analysis can only be as good as the data it starts with. The one exception to this, Auburn and you know why...

Maybe in the future I can rewrite my code so that we can look at all SEC games and compare the number of penalties vs the average for the home and away teams.